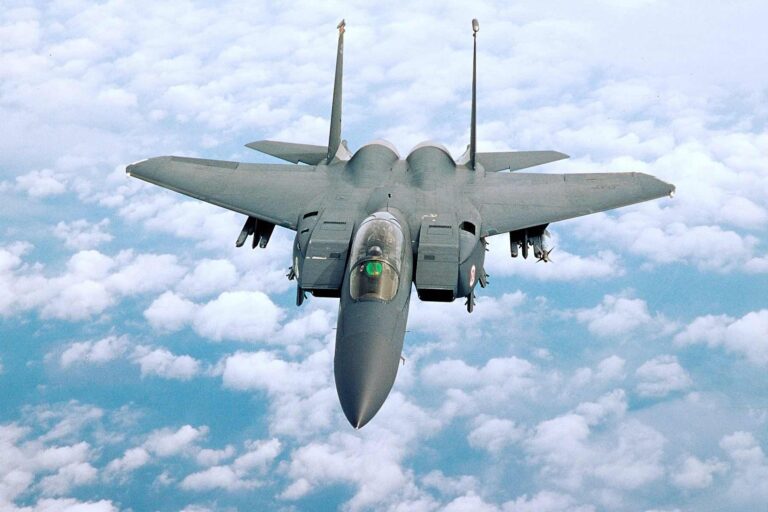 At the recent Northern Edge 21, a US Indo-Pacific Command exercise held from May 3-14, the USAF successfully tested its new Eagle Passive Active Warning Survivability System (EPAWSS) for the F-15 fighter.

EPAWSS is an electronic warfare suite designed to increase the F-15’s mission effectiveness and survivability against contemporary threats. Although the Air Force has not concluded testing its new system yet, the results from Northern Edge were promising.

“Northern Edge is an essential event for operational tests,” USAF Col. Ryan Messer said to Air Force Magazine, adding “it is one of only a handful of exercises that combine great power competition-level threat complexities with the joint interoperability necessary to realistically inform our test data.”

Background: EPAWSS is Formidable in Flight

With an excellent record of air-to-air success, the F-15 has proven itself formidable. But the F-15 is a fourth-generation fighter, first introduced in 1976. Without stealth or upgraded avionics, the F-15 has grown vulnerable to increasingly sophisticated surface and air based threats. EPAWSS offers a remedy to this vulnerability.

The EPAWSS plugs fifth-generation digital technology into a fourth-generation airframe, in an attempt both to upgrade and modernize the F-15 fighter, and reduce vulnerability and to improve longevity. Created by BAE Systems, EPAWSS “combines multispectral sensors and countermeasures, industry-leading signal processing, microelectronics, and intelligent algorithms to deliver fully integrated radar warning, situational awareness, geo-location, and self-protection capabilities,” BAE said in a press release.

EPAWSS provides pilots a 360 degree view of the battlespace. In effect, EPAWSS grants pilots with improved situational awareness, which should help them to detect and respond to potential threats more quickly, hence improving their chances of surviving contested airspace.

EPAWSS is being developed and tested for the F-15, in large part, to benefit fifth-generation fighters. EPAWSS-equipped F-15s are not just about self-protection, but also about helping the F-22 and the F-35. The EPAWSS provides additional jamming that “can help the F-35 get closer to the adversary,” Lt. Col. John O’Rear said to Air Force Magazine. “The more clutter, the more electronic attack you have out there, the more difficult it is for enemy sensors to work through that.” Basically, by using the F-15’s EPAWSS as a cloak, the F-35 can get closer to the enemy without using the F-35’s own radar or electronic attack, in effect reducing their own likelihood of detection.


Named Arachne, this new satellite will transfer solar energy wirelessly back to any location on the planet.

The F-15 is not just a cloak for the F-35. “As a fifth-generation asset [the F-35 has] stealth so we can physically get closer, but we may not have all the weapons that a fourth-generation aircraft, like a F-15 Strike Eagle does, “ Major Scott Portue, an F-35 test pilot said.

A reasonable question: why doesn’t the F-35, a plane designed to do absolutely everything, not have the offensive capacity of its predecessors? (likely to accommodate other functions, increased utility, but still the notion seems counterintuitive).

Outlook: In With the New… and the Old

Future Air Force operations will not rely solely on fifth-generation jets, like the F-22 or F-35, especially not with Cold War fourth-generation fighters like the F-15 and F-16 continuing to prove their utility. This is proving to be especially the case in areas where fifth-generation fighters are deficient. So, fourth and fifth generation integration is going to be a key facet of future Air Force operations, with different airframes supplementing and complementing each other.