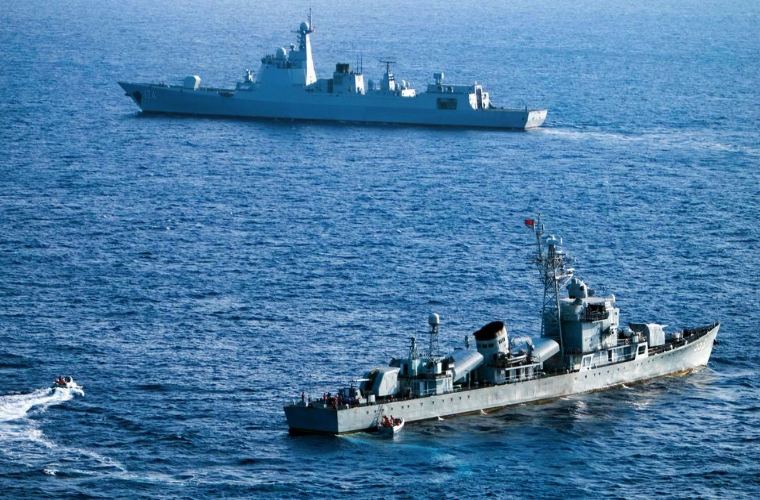 China's South Sea fleet taking part in a drill in the Xisha Islands, or the Paracel Islands, in the South China Sea. (Image: Str/AFP)


The South China Sea is playing host to Operation Pacific Iron 2021, a training excerise designed to game out war with China

In a move to one-up China’s defense, the Air Force is sending more than two dozen F-22 stealth fighters to the Western Pacific this month for Operation Pacific Iron 2021.

Approximately 25 F-22 Raptors from the Hawaii Air National Guard and from Joint Base Elmendorf-Richardson, Alaska will deploy to Guam and Tinian Islands for the exercise.

The Chinese air force has between 20 and 24 operational fifth-generation fighters, according to Carl Schuster, a Hawaii-based defense analyst and a former director of operations at the U.S. Pacific Command’s Joint Intelligence Center.

The decision to deploy more F-22s than China has in its entire inventory could be another point of contention in the simmering conflict between the U.S. and China in the Pacific. Confused as to how we got here? Follow along for a play-by-play on the major flashpoints and what the lead-up to potential military action could look like.

Is War Brewing over Taiwan and the Taiwan Strait?

Taiwan is undoubtedly the most pressing flashpoint there is in the conflict between the U.S. and China in the Pacific. Chinese President Xi Jinping pledged “reunification” with Taiwan and vowed to “smash” any attempts at formal independence in a speech on the 100th birthday of the ruling Communist Party.

In a congressional testimony held in March, Admiral Phil Davidson, head of the Pentagon’s Indo-Pacific Command, said that he could see China taking military action within the “next six years.”

Though U.S. support for Taiwan’s security is bipartisan, the U.S. policy of “strategic ambiguity” denies Taiwan any formal commitment to defend the country. But that policy could be swiftly changing.

As the threat of Chinese invasion looms larger over Taiwan, the U.S. and its allies are teaming up for military planning. Japan, with its Okinawa chain closer in distance to Taiwan than to the Japanese mainlands, is emerging as a close partner to the U.S. in this effort.

Japanese Deputy Prime Minister Taro Aso stated at the start of July that in the case of an attack, “Japan and the U.S. must defend Taiwan together.”

If we are to see military action taken within the next decade, then Beijing’s initial strategy may involve keeping U.S. Navy at a distance using defensive measures. In an op-ed for Bloomberg News, James Stavridis, a retired U.S. Navy admiral and former supreme allied commander of NATO, details how the conflict might emerge. China would keep the U.S. Navy at bay while reducing U.S. intelligence through anti-satellite weapons.

Then, rather than invading Taiwan through its beaches, the Chinese military strategy could be to overwhelm Taiwan, establishing sea and air control.

For the U.S. to combat this strategy, according to Stravridis, the Pentagon would have to invest more money and training in cyberwarfare, employment of Special Forces at sea, subsurface vehicles like submarines, and undersea drones, and air defense against missiles.

Why Is there Tension in the South China Sea?

Territorial disputes over the South China Sea happen frequently, as the body of water—nearly half the size of the U.S. continent—is bordered by five Asian countries. The waters are familiar to a melting pot of warships, with military presence from not just the U.S. and China, but also Australia, Japan, South Korea, India, France, Germany, and the UK.

The South China Sea is a resource-laden territory, one that China has been vying to control since the 1900s. In 2016, China’s claim to the sea was rejected by an international court.

This July, on the five-year anniversary of this ruling, the U.S. vowed to defend the Philippines, its longtime ally, in the event of an attack.

“Nowhere is the rules-based maritime order under greater threat than in the South China Sea,” Blinken said. “The People’s Republic of China (PRC) continues to coerce and intimidate Southeast Asian coastal states, threatening freedom of navigation in this critical global throughway.”

Even without Blinken’s vows, under a 1951 mutual defense treaty, the U.S. is obligated to respond to an attack on the Philippines or Philippine vessels, of which there are many in the South China Sea. So while the U.S. hasn’t taken an official stance on ownership of the territory, it cannot distance itself from the conflict brewing there.

U.S. Defense Secretary Lloyd Austin is set to visit several Southeast Asian countries, including the Philippines, Singapore, and Vietnam, at the end of the month to strengthen alliances and reinforce the need for U.S. presence in the region.


The ISS is falling apart due to age and tech glitches. The Debrief explores the last 5 major incidents aboard the space station.

China’s ploy for the area includes the construction of artificial islands, all militarized and some with airfields. In the event of combat, Stavradis hypothesizes that China would flood the region with their capable surface ships, launch missiles at U.S. flotillas, and disable American command and control structures through cyberattacks.

With tensions high in the Pacific, the U.S. is using Operation Pacific Iron to focus on de-escalation rather than provocation.

“Demonstrating the US Air Force’s Agile Combat capability sends a strong deterrent signal to China and reassuring one to (US) allies and partners,” said Schuster.

The F-22 is the world’s most advanced fighter aircraft—even though it faces early retirement—which will make Pacific Iron one of the most “complex deployments” the Air Force has ever organized, according to Wilsbach.

This exercise, performed successfully, would suggest to China that F-22 force packages could be deployed anywhere around China’s periphery.

At the end of the day, Operation Pacific Iron is a show of might and what it seeks to communicate is up to China’s interpretation. Let’s hope things don’t get lost in translation.