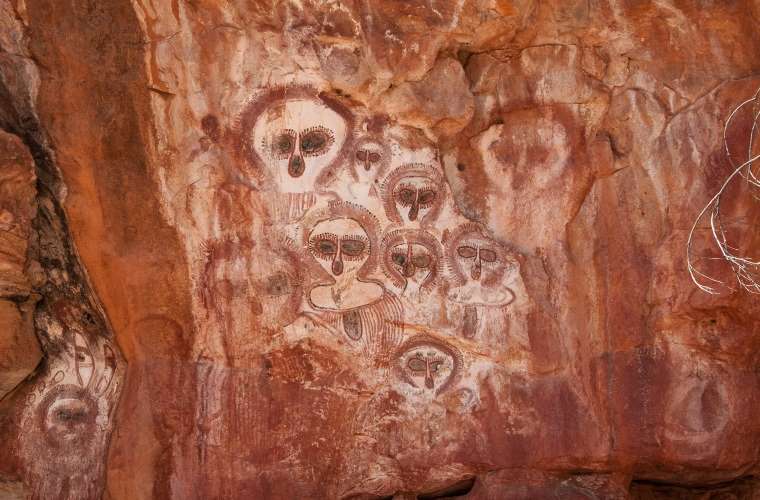 Four thousand years ago, the First Peoples of Australia looked to the burnt and fiery landscape of the Kimberley in Western Australia set out to create a vibrant land where they could thrive. As the rains abated and the heat scorched the barren setting, their crops dried up, forcing the First Peoples to search for answers. The Earth’s climate was changing, and these ancient people mapped their weather systems by weaving together anecdotal climate data and their mythologies.

The First Peoples looked to the cosmos and began to pray for reprieve from the intolerable conditions. Wandjina, the Rain Maker spirit, replied by bathing them in long-awaited rainfall. Their crops prospered, their cattle thrived, and they rejoiced, forever making Wandjina a permanent fixture of their landscape. While gods will do what gods will do, the fact of the matter is that these drawings seem to indicate a rich understanding of ancient Australia’s climate.

Wandjina, the Rain Maker spirit, is prominent in early Australian cave art and is considered sacred to the Aboriginal people of the Kimberley who make up the Wanjina Wunggurr Community. The drawings featured heavily in the 2000 Sydney Olympic games bringing attention to the importance of the art and its preservation. Comparisons can be drawn to similar artworks found worldwide that depict the era’s violence and what the local people battled.

In this case, it is thought that perhaps the Wandjina drawings may be relaying the story of the rising seas. Due to the cyclonic nature in the Kimberley region, the wet seasons can be tumultuous and terrifying for people who’d never witnessed similar conditions. It’s possible that the Wandjina drawings representing the sacred spirit of creation, thought to come about during these events, are depicted in the area for those reasons. In the true fashion of the futurist art movement, the storytellers of the time depicted what they faced through artwork. Some researchers have speculated that the detail found in each drawing tells of the understanding of nature and climate change that the First Australians had.

For example, David Roth of the Japingka Gallery explains how thunderstorms were represented through the Wandjina’s black eyes and lightning in the line between the orbs. The figures have often been depicted with dots painted in light brushstrokes, which may represent the Wandjina covered in raindrops. This attention to detail leads researchers to believe that the Aboriginal people of the Kimberley region knew what climatic changes the barren region of Australia faced and, because of it, were equipped to deal with the floods and polarising droughts.

These drawings, however, aren’t localized to the Kimberley region alone and have often been discovered in numerous locations around the country, sometimes alongside much older images of Gwion Gwion that have been thought to date back more than 15,000 years when in 1891 lost Australian farmer, Joseph Bradshaw accidentally stumbled across the dancing, mulberry toned drawings. Upon further inspection by archaeologists today, it was thought to be almost impossible to say who drew the exquisitely crafted characters and why. It has been speculated that due to the Gwion Gwion’s close proximity to locations that harbor the Wandjina drawings, they might belong to an even earlier people. Dating, though, has been difficult. Having being preserved by millennial climate changes, the Gwion Gwion drawings will likely last for centuries to come. In contrast, the Wandjina drawings seem to be temperate and at risk of rapid deterioration when subjected to fires, floods, and human contact. Thus, preserving the historic drawings is critical, as is the education around the heritage of the art as Australians spearhead reconciliation with the First Peoples.

Australian author Mike Donaldson has written extensively on the rock art found in the Kimberley region and notes that the early British explorers believed that the Aboriginal people couldn’t have created the figures. “They were totally unlike anything that people had reported from Aboriginal rock art in Australia before,” Donaldson said in an interview with ABC News, fuelling the mystery of the findings. Feeding further into the theory that these creations didn’t come from the First Peoples, Erich von Daniken, Swiss author of Chariot’s of the Gods, charged the mystery of the art by stating that he believed ‘extra-terrestrials had visited the red terrain of the Kimberley and left their mark. Daniken’s insinuations, much like those of the early explorers that Aboriginal people of the era weren’t skilled or educated enough to create and understand such complex weather systems and climate changes, adds to the systematic problem the First Peoples have faced in Australia since white settlers arrived on their shores in the 1700s and earlier.

A push to clarify the origin of the art to restore respect to the First Peoples has seen countless researchers and archaeologists flock to the region. However, the usual process used to date this kind of art has proven difficult. While the Wandjina drawings stylistically encompass charcoal to draw the large, all-seeing eyes, the Gwion Gwion drawings do not, making radiocarbon dating almost impossible. However, in 2019, Ph.D. Candidate Damien Finch wrote in his study that expunging sources of carbon from ash deposited by nearby fires would help date the archaeological finds giving us the reliable bracket of dating to the Gwion style, having survived in the region for less than 1000 years. The finding coincides with the rapid end of the ice age when rising waters from melting seas (as depicted in the Wandjina drawings) decimated the surrounding land.

For many researchers who study the unique cave art that has been shrouded in mystery, one thing remains clear—the First Peoples deserve the respect they earned thousands of years ago when they first roamed the red dirt and the barren, scorched lands when they searched for answers and left us art depicting the future. And we, as a people now, owe the Rain Maker and the First Peoples the freedom to move between sea and land and beyond the traditional Kimberley backdrop into a land that is and always has been rightfully theirs. By closing this education gap and rightfully returning the rights of the Wandjina cave drawings and the Gwion Gwion to the artists who created them, we are working with the First Peoples to reconcile the injustices they have experienced and educating those who come after us.

Violeta Bagia is an Australian based paranormal and fantasy novelist. She is the author of the Hart of Darkness series, and several other works. You can follow Violeta on Twitter @vmb_author.