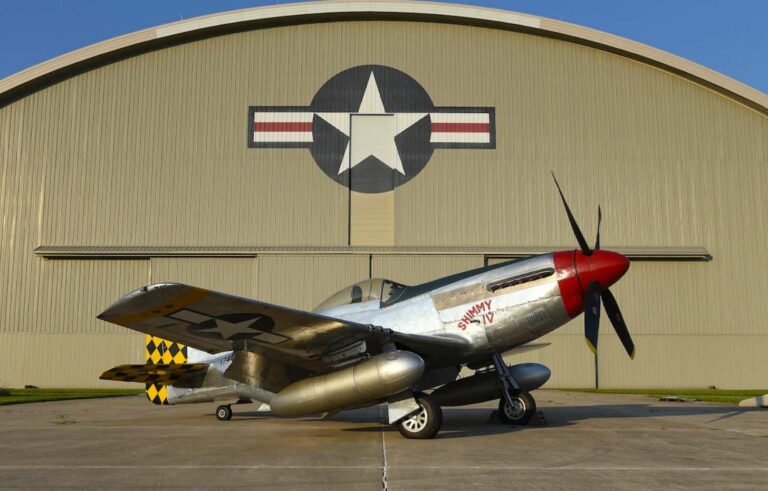 An P-51D Mustang, similar to the one flown by Mantell in 1948 (Photo credit: National Museum of the Air Force).

In the process of researching the history of the 1948 Thomas Mantell crash of 1948 in Kentucky, The Debrief reviewed numerous government documents from the era, most of which were recorded as part of Project Sign. As you may recall, Mantell was leading a squadron of P-51 Mustangs when he was diverted to investigate a reported sighting of a UFO over an airfield at Fort Knox. The pilot went on to lose his life when his plane crashed under unusual circumstances. While most of the related material originated in the period between 1948 and 1950 as part of the Project Sign investigation, a few documents were rather unique in terms of the time frame of their origin and included some tantalizing hints suggesting other potentially unreported incidents of a similar nature.

There were several letters written in 1964, a full sixteen years after the Mantell crash, to and from a Dr. Richard G. Snyder who, at the time, was serving as the Acting Chief of the Protection and Survival Branch of the Federal Aviation Agency Aeronautical Center in Oklahoma City, Oklahoma. (A portion of one of the letters is provided for your review at the link, as will be other documents referenced here.) The Federal Aviation Agency was the forerunner of today’s FAA. Dr. Snyder was keenly interested in the Mantell incident and requested every available record of the event, including crash scene photographs, coroner’s reports, autopsy details, and witness testimony.

The intriguing hint that we noticed in this correspondence was found in the reason that he offered for needing the information. He said that he was investigating a “recent” crash (that is, “recent” in 1964) of another P-51 which he described as being “almost identical in circumstances” to the Mantell crash.

As you might imagine, anyone with even a scintilla of interest in the UAP topic couldn’t read something like that and not immediately perk up their ears. Were the similarities that Snyder seemed to perceive strictly related to mechanical issues with the aircraft or medical issues faced by the pilot? Or did this 1964 crash also involve something exotic and unidentified? Those few letters served as the starting point for an investigation that would stretch on for months and take several surprising turns.

THE SEARCH BEGINS… AND NEARLY ENDS

Multiple FOIA requests were sent to the Air Force based on the assumption that if one of their planes had gone down and they had lost a pilot, they would clearly have taken an interest. At the same time, a search of the archives of all newspapers from the period was undertaken. Any time a plane goes down it is a newsworthy item, with military planes frequently drawing plenty of attention. But curiously, a search for a single-fatality P-51 military crash in 1963 and 1964 in Oregon turned up nothing. (The P-51 Mustang is a single-seat fighter plane.)

Had Dr. Snyder confused the location or the dates? The more conspiratorially minded among us might have begun to wonder if there was a massive cover-up in play.

At the same time, despite multiple FOIA appeals, the Air Force found no responsive records aside from the few letters we had already seen from the Blue Book files. The search appeared to be running into a brick wall. But then The Debrief located a trove of Dr. Snyder’s personal papers that had been donated to a university library in Arizona over the years, including his documents from his time with the FAA. With the aid of a helpful librarian and research associate, more than 100 pages of documents pertaining to the crash in Oregon were discovered.

The mystery of why there didn’t seem to be any records of the crash was quickly resolved. Snyder had indeed been deeply involved in an investigation and the crash was very real. It took place on June 15, 1964, in a rural area outside of Canyonville, Oregon. And it had indeed been reported in multiple newspapers at the time. There was even an NTSB record of the loss of the plane. The reason initial searches for information with both the Air Force and public media records were not fruitful is that some understandable initial assumptions were totally incorrect.

Though Dr. Snyder frequently referred to the aircraft as a P-51 Mustang, it was actually registered as an F-51D. That’s the designation given to former military aircraft of that type when they are sold off to the civilian market. The plane had been in the Canadian Air Force, not the United States military. At the end of its service, it was put up for auction and sold to a private civilian pilot in Washington state. Also, it was not a “single-fatality crash.” The plane had been modified to carry passengers and the pilot, along with his wife and all three of his children, tragically perished in the crash. Thus, the United States Air Force was never really involved in the incident.

ANSWERS ABOUT THE PILOT AND THE CRASH ONLY RAISED MORE QUESTIONS

Dr. Snyder identified the pilot as Mr. John Frederick Spach, age 43, of Edmunds, Washington. Also tragically lost in the crash was his wife, Virginia Rose Spach, 41, their daughters Kathryn Marie, 7, Jana Lee, 5, and their son Robert John, who had just turned three years old on the day of the crash. Spach’s plane had been modified by removing the large fuselage fuel tank behind the pilot’s seat and replacing it with a narrow wooden platform with a single safety belt installed on it. The wisdom of making such a modification, to say nothing of packing the entire family in there with none of the children even having a safety restraint of any sort is clearly up for debate, but it explains how five people perished in a crash of an ostensibly single-seat aircraft.

The resemblances between Spach’s crash and that of Thomas Mantell seemed to be few, but understandably so given Dr. Snyder’s specific area of study. The official explanation of the Mantell crash was that the pilot had flown to too great of an altitude without proper oxygen equipment, succumbed to hypoxia, and either passed out or died. Spach had been flying into seriously bad weather and reportedly planned to fly above the thunderstorms, an approach that would have likely taken him to an altitude of nearly 19,000 feet where there is much less oxygen. The plane was not equipped with oxygen and Spach had no record of being trained in the use of cabin oxygen equipment.

This is a detail that Snyder focused on. He gave multiple presentations over the years and The Debrief obtained a copy of his presentation text amended with Snyder’s personal notes and observations. He wrote that “the aircraft was found to have disintegrated prior to ground impact at an angle of about 85 degrees, and evidence indicates that it may have been transonic in a vertical dive.”

The evidence in question involves the autopsy report which showed that none of the victims had any clothing on when what remained of the bodies was recovered. The report suggested that winds in excess of 520 miles per hour would be required to strip all of the clothing off of crash victims and Spach’s plane would have needed to plunge from more than 20,000 feet to achieve such speeds.  But that analysis doesn’t fit with the official Civil Aeronautics Board report or the accounts of the witnesses.

HOW DID THE CRASH actually play out?

Dr. Snyder’s analysis described the crash of the F-51D as being essentially identical to that of Thomas Mantell’s crash in 1948. The pilot supposedly lost consciousness and the plane went into a steep nosedive, reaching speeds greater than the airframe could sustain and breaking up, scattering wreckage over a wide area. But there were five witnesses who saw Spach’s plane go down who were interviewed as part of the investigation. Each one of them reported seeing the plane flying straight and level below the clouds at an altitude of approximately 300 feet before hearing a loud “bang” sound. One witness recounted seeing the plane’s wheels in the lowered position as if it had been preparing to attempt a landing.

The storm clouds at the time of the accident reached up to 19,000 feet. In order for all of the claims that were made about the crash to be true, Spach would have had to climb to an altitude of nearly 20,000 feet to get above the weather. He would then have presumably passed out from hypoxia and allowed the plane to go into a steep dive through the storm. He would then have had to awaken while still plunging toward the earth and level out his flight before the plane came apart. This scenario leaves us with many questions.

If the plane was structurally sound enough to recover from a steep dive, level out at 300 feet, and deploy its landing gear, why would it then simply break apart? And then there is the question of the condition of the bodies. The official analysis concluded that the passengers must have been exposed to tremendous wind forces for their clothing to be blown off, implying that the windows of the plane must have blown out during the nosedive. Would anyone have been able to recover from such forces sufficiently to regain control of the aircraft? Also, all of the bodies were literally in pieces, sustaining far more damage than would be expected if the plane simply hit the ground from an altitude of 300 feet flying at normal speeds as the witnesses reported. So did the plane actually explode? And if so, why?

Despite Dr. Snyder’s keen interest in the crash of Thomas Mantell, there is nothing in the official records to suggest that any sort of UFO or other anomalous activity was involved in Spach’s crash. The tragic event seems to have been the result of poor decisions made by the pilot. Most of the media coverage of the event described Spach as “an experienced pilot with nearly 2,000 hours of flight time.” That’s technically true, but the vast majority of those hours were logged in a Cessna 170 that he had owned for many years. He had only purchased the F-51D the previous winter and had logged just 14 hours of flight in it prior to the crash. And yet the disparities between the various reports of how the crash took place make this event very curious indeed.

There is no question as to how the story ended, however. We were unable to locate an obituary for the Spach family in any of the local newspapers, but there is no legal requirement for families to publish one. The remains of the victims were taken to Mountain View Memorial Chapel in Myrtle Creek, Oregon. The Debrief contacted the current proprietors of the funeral home and confirmed that they were then transferred to Lynnwood, Washinton where they were interred at Floral Hills Cemetary. A photograph of the gravesite can be seen at Find A Grave. Rest in peace.