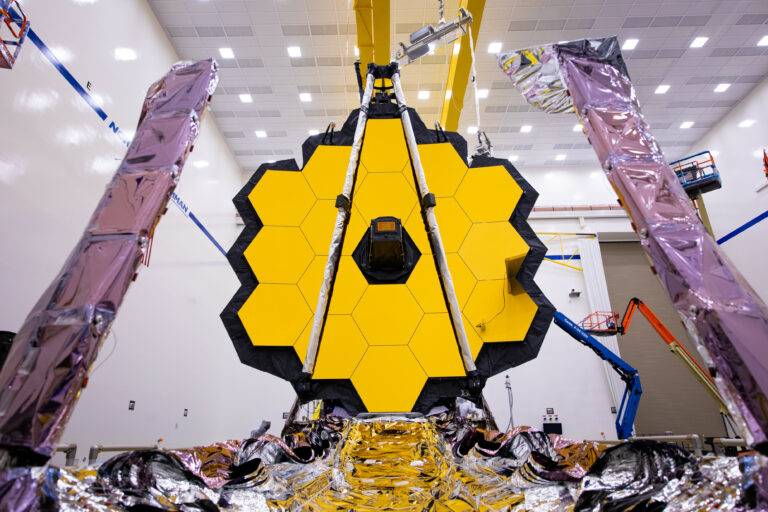 In many ways, the history of astronomy is the history of ever-improving telescopes. From Galileo to the Hubble Space Telescope, every technological leap has taught us more about our Universe, and has pushed back the boundaries of ignorance a little further. We stand on the verge of another big leap: in just a few short weeks, the James Webb Space Telescope will launch from the Guiana Space Centre. I will be watching, alongside millions of others. And for good reason: if all goes to plan, JWST is set to re-write everything we know about our place in the Universe.

Webb has been a long time coming. Back in 1996, the ”Next Generation Space Telescope” (as it was then called) was planned to launch in 2007, and was budgeted at $500 million. The launch date and the cost have grown over time, and the (now) 10 billion dollar mission will launch on December 22th, 2021.

The good news is that the delays and the cost will be well worth it. Webb is set to reveal parts of the Universe that were completely out of reach until now: it will explore the first galaxies that lit up the cosmos, and search for life on distant exoplanets. The Hubble Space Telescope has been doing this kind of thing for decades, but Webb, at around a hundred times more powerful, is going to leave Hubble in the shade.

Webb is designed to ‘see’ invisible light in the infrared, spanning a wavelength range from 0.6 micrometers (around the reddest light we can see with our eyes) all the way out to 30 microns. This spectral span is nearly thirty times wider than the range Hubble’s cameras are capable of seeing. Combine this spectral range with a huge mirror that has more than 6 times the collecting area of Hubble (which means 6 times more light being gathered), and Webb starts to look like a truly remarkable telescope.

So what will Webb do with all that power? The short answer is that it will change astronomy forever.

One of the primary science goals of the James Webb Space Telescope is to study the atmospheres of ‘exoplanets’ – planets orbiting stars other than the Sun. Planets like the Earth tend to be warm (rather than hot–like stars–or cold like interstellar gas). And warm things glow in infrared light – Webb’s specialty. In addition, there are several important biological molecules that leave their chemical fingerprints in infrared light: by studying the atmospheres of exoplanets, Webb will be able to detect things like water, carbon dioxide, and methane. All ‘biosignatures’, which might hint at the possibility of living things inside those atmospheres. If there are any to find, of course.

Webb will also come into its own when looking much further afield. The most distant galaxies in the Universe have proved elusive and difficult for Hubble to spot. This is, in part, because of ‘redshift’: the way the light from these galaxies is stretched as it travels through our ever-expanding Universe. By the time it reaches us, light from ordinary stars can be reddened far beyond the visible part of the spectrum. The only way to see these incredibly distant objects is to look in the infrared.

Across the entire span of cosmic time, there aren’t many areas of astronomy that Webb won’t revolutionize. From the earliest times, watching the first stars coalesce out of the primal darkness, to the formation of stars, planets, and (maybe!) life, Webb will see it all.

This is, of course, if Webb survives its perilous journey. Webb’s final home will be a point which astronomers call ‘L2’ – a ‘Lagrange point’, a rare island of stability in our dynamic solar system. It is located directly away from the Sun, around a million miles out from Earth. Sitting at L2, Webb’s annual orbit around the Sun will be in sync with Earth’s. From Webb’s point of view, the Earth and Sun will stay fixed in the sky: this will make shielding and calibration much easier. It will also make Webb impossible to service. Hubble’s low-Earth orbit is a challenging environment for a telescope (it is constantly being heated and cooled as it swings around our planet), but when Hubble breaks we can fix it. Webb is on its own.

“On its own”, is, fortunately, exactly where an infrared telescope needs to be. Over a million miles from the infrared-bright Earth, the James Webb Space Telescope will have the darkness and the space it needs to give us the best ever views of our Universe.

Dr. Matt Bothwell is a Public Astronomer at the University of Cambridge and a science communicator who gives astronomy talks and lectures on almost any area of astronomy and makes regular media appearances (including local and national TV and radio). When he is not doing outreach, Matt is an observational astronomer, who uses a range of state-of-the-art observing facilities to study the evolution of galaxies across cosmic time. His first book The Invisible Universe: Why There’s More to Reality That Meets the Eye is out on December 7th from Oneworld Publications.