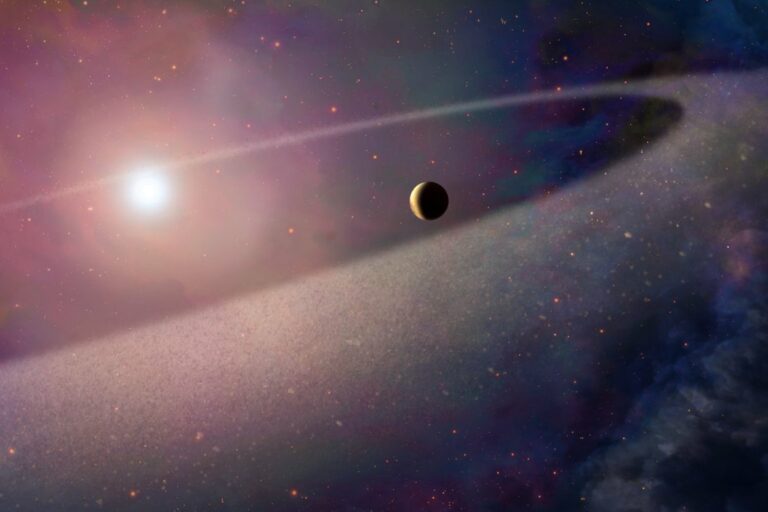 From SETI to NASA, as well as governments and universities around the globe, astrobiologists and astronomers are furiously searching for signs of life on planets outside our solar system. However, according to newly published research from the University of Warwick, if those E.T. hunters hope to find life on a planet orbiting a white dwarf star, a common type of depleted star found throughout the Milky Way galaxy, then that life almost certainly would have had to evolve after the star’s violent, radiation spewing death.

“The research provides new insight for astronomers searching for signs of life around these dead stars by examining the impact that their winds will have on orbiting planets during the star’s transition to the white dwarf stage,” reads the press release announcing the new research. “The study concludes that it is nearly impossible for life to survive cataclysmic stellar evolution unless the planet has an intensely strong magnetic field–or magnetosphere–that can shield it from the worst effects.”

Background: Origins of the White Dwarf

A white dwarf star is essentially a main sequence star that has finally exhausted its fuel supply and is no longer generating fusion energy. Astronomers calculate that this fate awaits up to 97% of observed stars because they lack the overall energy to transition to a black hole or neutron star after their death.

Following its conversion, a white dwarf star becomes very dim, as it is only radiating light and heat that is left over from its furious demise.  This, according to researchers, means that any planets orbiting these stars may make for tempting candidates in the search for life, as long as that life evolved after the transition when they are no longer being constantly bombarded with solar radiation.

On Earth, for example, where our host star regularly churns out dangerous, ultraviolet stellar winds, a magnetic field generated by a rotating iron core serves to protect life from these potentially deadly radiation blasts. However, astronomers believe that not all terrestrial exoplanets will have this advantage, meaning that the waves of stellar radiation bombarding these planets may simply be too intense for life to evolve, much less survive.

With this in mind, the Warwick University team set out to determine if a robust magnetic field would be sufficient to protect earthlike life forms from the violent waves of radiation spewed out during that star’s death, or if any life found on planets orbiting white dwarfs would likely have to have evolved afterward.

Analysis: A New Hypothesis is Tested

To test their hypothesis, the team first started by modeling our own planetary system and its host star, the sun. This model confirmed the conventional belief that whenever our star runs out of usable hydrogen, the core will contract and heat up, driving an enormous expansion of the outer atmosphere that temporarily turns it into a ‘red giant’.

This not only means that the Sun itself will expand to a diameter of tens of millions of kilometres, effectively swallowing the inner planet, (including possibly the Earth) but its resultant loss of mass will lower its gravity significantly. In short, even if our planet is not consumed by the event horizon of the expanding red giant, and even if some of our planet’s life survives the extreme radiation belched out during this transition, Earth itself is unlikely to remain in the star’s habitable zone.

“In our solar system, the habitable zone would move from about 150 million km from the Sun – where Earth is currently positioned – up to 6 billion km, or beyond Neptune,” the release explains.

Using this model of our home planet’s inevitable demise as a baseline, Vidotto and fellow study co-author Dr. Dmitri Veras next modelled the winds from 11 different types of stars, with masses ranging from one to seven times the mass of our Sun. And what they found confirmed their initial suspicions.

“[Our] model demonstrated how the density and speed of the stellar wind, combined with an expanding planetary orbit, conspires to alternatively shrink and expand the magnetosphere of a planet over time,” the press release explains. “For any planet to maintain its magnetosphere throughout all stages of stellar evolution, its magnetic field needs to be at least one hundred times stronger than Jupiter’s current magnetic field.”

According to Veras, this result demonstrates the difficulty a planet would face in trying to maintain its protective magnetosphere throughout the star’s conversion stages.

“One conclusion is that life on a planet in the habitable zone around a white dwarf would almost certainly develop during the white dwarf phase,” he said, “unless that life was able to withstand multiple extreme and sudden changes in its environment.”

Outlook: The Search for Life

At present, no terrestrial style planet capable of supporting life (as we know it) has been found orbiting a white dwarf. But, the study notes, two extrasolar gas giants have been spotted close enough to their white dwarf host’s habitable zone that an earthlike planet could, at least theoretically, exist in that range as well.

In their conclusion, the team points out that future observation platforms like the James Webb Telescope which is scheduled to launch this November, should be capable of revealing a significant amount of new information about white dwarfs and the planets that orbit them, including whether or not those planets display biosignatures indicating the presence of life. And, said Veras, if the team’s models are correct, it will likely be life that evolved after the original star’s explosive demise.

“White dwarfs are also very steady stars as they have no winds,” said Veras. “A planet that’s parked in the white dwarf habitable zone could remain there for billions of years, allowing time for life to develop, provided that the conditions are suitable.”