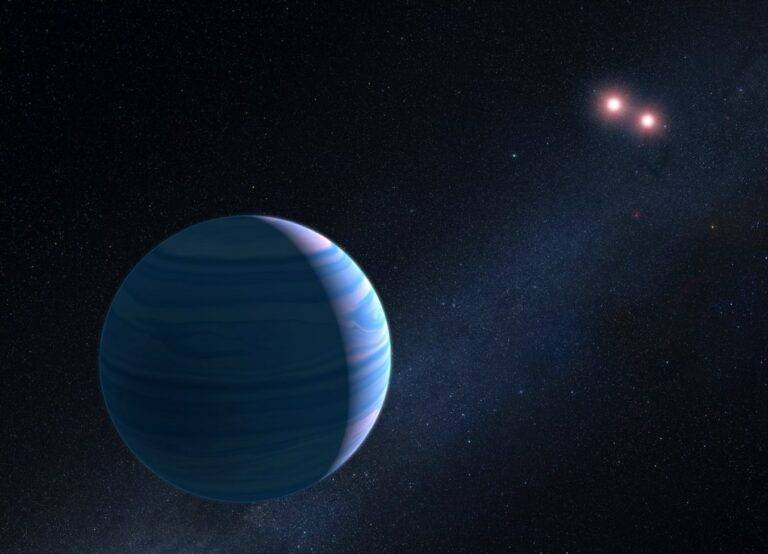 When scouring the cosmos for signs of life that may exist elsewhere, most scientists are searching for a host planet very much like our own; a “cosmic twin” that could mirror Earth in a variety of different ways.

A planet’s distance from its host star has often been used to search for what astronomers refer to as the “goldilocks” zone, an orbit where the radiation from its star is at the right level to potentially allow for liquid water on the planet’s surface.

Some tempting candidates have been found using this method, but one researcher at the University of British Columbia, Okanagan (UBC) Campus has recently shown that there may be an even better way to determine the potential habitability of some exoplanets: their geology.

“While a planet’s orbit may lie within the habitable zone, its early formation history might ultimately render it inhabitable,” said Dr. Brendan Dyck, assistant professor of geology in the Irving K. Barber Faculty of Science and lead author on the study in a press release announcing the results. “The good news is that with a foundation in geology, we can work out whether a planet will support surface water before planning future space missions.”

Background: Exoplanets and Their Discovery

The first exoplanet was discovered in the 1990s, and since then over 4,000 confirmed planets have been identified. A number of methods have been used to search for signs of life on these identified planets, intelligent or otherwise. Some look for technosignatures originating from a targeted world, while others are looking for those same signs on the Moon or Mars. However, regardless of the method, all researchers have focused those efforts on planets that lie in their host star’s habitable zone.

“We typically hope to find these planets in the so-called ‘goldilocks’ or habitable zone, where they are the right distance from their stars to support liquid water on their surfaces,” said Dyck. However, he notes, according to his research, this may not be the best method.

“Just because a rocky planet can have liquid water doesn’t mean it does,” Dyck explains in the release. “Take a look right in our own solar system. Mars is also within the habitable zone and although it once supported liquid water, it has long since dried up.” This realization led the UBC researcher to focus on the geology of a target planet as opposed to its orbit, with hopes of fine tuning the process of identifying habitability.

With results published in the Journal Astrophysical Letters, Dyck first noted how the smaller rocky planets within any given system all have one thing in common, they contain the same proportion of iron as their host star. However, the researcher explains, what differentiates these rocky worlds from each other is the actual volume of iron that resides in the planet’s mantle versus within its core.

“As the planet forms, those with a larger core will form thinner crusts,” Dyck says, “whereas those with smaller cores form thicker, iron-rich crusts like Mars.”

This proportion of iron in the mantle versus the crust, he explains, can help astronomers to better determine the thickness of the planet’s crust. This measurement, his research reveals, may be a key component in determining if liquid water can exist in the planet’s surface.

“Our findings show that if we know the amount of iron present in a planet’s mantle, we can predict how thick its crust will be and, in turn, whether liquid water and an atmosphere may be present,” said Dyck, before noting the value of these findings to his fellow researchers over the traditional method. “It’s a more precise way of identifying potential, new Earth-like worlds than relying on their position in the habitable zone alone.”

Outlook: The James Webb Telescope and the Hunt for Exoplanets

Although this new process has yet to be put to the test, Dyck sees an excellent opportunity for the discovery of new exoplanets–as well as the potential for discovering alien life–just over the horizon: the launch of the James Webb Telescope (JWT).

“One of the goals of the JWST is to investigate the chemical properties of extra-solar planetary systems,” said Dyck. “It will be able to measure the amount of iron present in these alien worlds and give us a good idea of what their surfaces may look like and may even offer a hint as to whether they’re home to life.”

One mission already approved for the JWT will search for technosignatures on a series of possible exoplanets in the Trappist-1 system, but Dyck believes the space based observatory may also offer a unique opportunity to identify numerous other target planets before any future searches are underway.

As for what he and his team will do next, Dyck believes that many exciting research efforts in his field are an indicator of great things to come.

“We’re on the brink of making huge strides in better understanding the countless planets around us and in discovering how unique the Earth may or may not be,” he said. “It may still be some time before we know whether any of these strange new worlds contain new life or even new civilizations, but it’s an exciting time to be part of that exploration.”