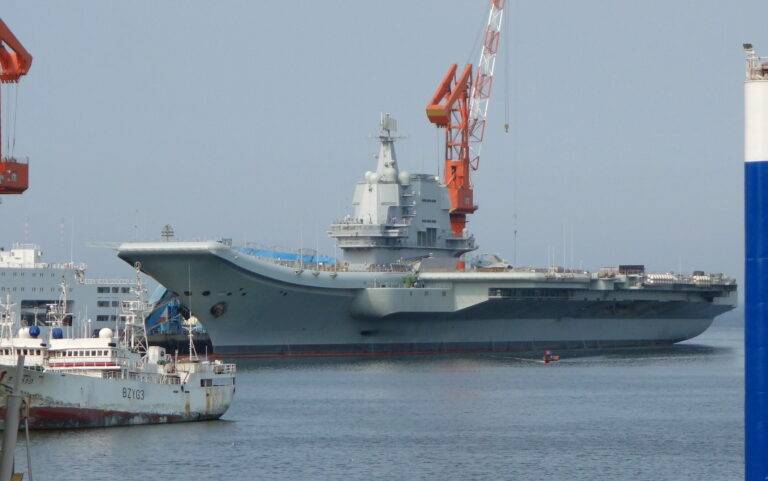 American military intelligence agencies have been keeping a very close eye on Chinese naval capabilities for some time now and with good reason. For well over a decade, the Chinese have been expanding their military presence on the disputed Spratly Islands, a collection of tiny, virtually uninhabitable rocks in the South China Sea. Now those islands are bristling with landing strips, missile systems, and ports. Adding to an already tense and complicated situation have been a series of demands from China that other nations “respect their sovereign waters,” though the United States and most of the world consider the area to be international waters.

Having military installations on small islands is not quite as useful without having adequate naval forces to support them. With that in mind, China has been expanding its navy and growing increasingly aggressive in the South China Sea channels. This situation has come further into focus this winter, with the third modern aircraft carrier in China’s fleet nearing completion.

In addition to that, the Chinese are expanding their Jiangnan shipyard (where the carrier is under construction) and fitting it to handle significantly larger and more modern naval vessels. Adding all of this together, it’s worth asking precisely how much of a naval power China is becoming and whether their new aircraft carrier capabilities represent an increasing threat.

China has boasted a navy with operational fighting vessels for most of recorded history, starting with its earliest ocean-going junks in 722 BC. The Imperial Chinese Navy was established in the 1860s, and the current Republic of China Navy has been around since the early 20th century, but it’s only been in the past few decades that they’ve worked to exponentially expand their naval warfare capabilities for the People’s Liberation Army Navy (PLAN) through the addition of carriers.

China’s first foray into carrier construction came with the Type 001 Liaoning, built from the unfinished hull of a Ukrainian carrier in the mid-1980s, supposedly intended to be a training vessel. They later produced the Type 001A Shandong. China is now constructing a third Shangdong class aircraft carrier, designated as the Type 002, outside of Shanghai with greater launch and retrieval capabilities than the previous two. A fourth carrier of the same class has reportedly already begun construction.

Janes Defense confirms that the new J-15 carrier-borne multirole fighter is back in production and can be flown off of the Shangdong class carriers. Adding all of these facts together, combined with some recent naval exercises, presents the picture of a country with some serious ambitions in terms of projecting power on the high seas.

ANALYSIS: A Waste of Time and Money?

Questions remain about the effectiveness of the original Chinese aircraft carrier Shangdong. The “ski jump” ramp design at the ship’s prow is fine (and required) for the J-15 fighters. But larger, heavier aircraft such as the KJ-600 (the Chinese equivalent of the American E-2C Hawkeye early warning system plane) can’t launch off of that slope, limiting the carrier’s capability. The new Shangdong carrier appears to have a second, angled flight deck similar to the designs traditionally seen on American carriers, allowing them to launch more types of planes, which represents a definite advancement.

Merely having an advanced aircraft carrier and some planes does not make one a master of naval aviation. As one U.S. Admiral said recently, he welcomes the challenge of the Chinese moving into this sphere. It has taken the United States a very long time to reach its current state of dominance in this arena, with many expensive lessons learned along the way. The number of supporting vessels, personnel, and equipment required to field a fully functional carrier battle group is daunting. China very likely still has a long learning curve in front of them, though they will doubtless benefit from intelligence gleaned from observing our military.

BUT DO AIRCRAFT CARRIERS EVEN HAVE A FUTURE?

Rather than questioning whether China’s naval aviation capabilities are advanced enough to threaten American naval forces, perhaps we should be asking if aircraft carriers of any sort still have a place in our naval warfare strategy. The Debrief checked in on some of the research done by David Wise, writing for The National Interest. Wise has been studying (and writing about) the evolution of aircraft carrier technology for quite a while. As to his opinion of where we need to be heading, the title of his most recent article on the subject sums it up nicely. “The Navy Must Accept That The Aircraft Carrier Age is Ending.”

American carriers have remained in vogue for a long time based on their ability to operate close to our adversaries’ coasts with impunity. Nobody has sunk an American carrier since 1942 (The Hornet). But the actual reason for that is that nobody has tried. The United States hasn’t engaged in a major sea battle since 1945.

The ability to fight a carrier battle at sea, close to the adversary’s shore, is no longer something we can assume. The days of an enemy needing to defeat our fighters in aerial dogfights and make it past the guns and missiles of the carrier task force ships that encircle our “bird farms” to damage a carrier have largely passed. Technology is quickly rendering that model of naval engagement obsolete.

Inspector General Launching Evaluation into The Pentagon’s Actions With UFOs

Multiple nations are currently developing and testing hypersonic missiles. The United States is getting into the game, as are the Russians. Even North Korea claims to have some in development. These missiles are likely too fast to be intercepted and destroyed by our jets or the weapons of the smaller carrier battle group ships.

Another thing to remember is that you don’t need to sink an aircraft carrier to take it out of action. If you can get even a small weapon through and blow a few holes in the flight deck and spread around some debris, no planes will be launched. Other new technologies, including drones, could conceivably be deployed to damage the flight deck of a carrier. Back in the day, I had to participate in “FOD walk downs” (Foreign Object Debris) on our carrier’s flight deck. It doesn’t take anything larger than a nut or bolt to be sucked into a jet intake to disable the engine. And a carrier that can’t launch fighters is really nothing but a massive target.

For many reasons, the recent developments on the naval aviation front by the Chinese bear watching. But two carriers with the capability to launch multiple types of aircraft without the support of a full, experienced battle group surrounding them wouldn’t make them as much of a threat in a naval battle as we might imagine. That could change in the future, of course, as China continues to pour massive amounts of resources into their development efforts, but they don’t appear to be there yet.

Further, China’s likelihood of attempting a first strike against an American carrier battle group in the South China Sea is largely considered minimal. Neither China nor the United States wants to light the fuse on an ocean battle that could escalate to the use of tactical weapons. China is far more comfortable portraying strength while conducting its actual attacks through espionage and technology theft. And those are the areas we should likely be focusing on in terms of monitoring any potential threats to the United States by the Chinese Communist Party.

Archaeologists Have Found Ancient Friendship Bracelets, Revealing the Roots of this Tradition