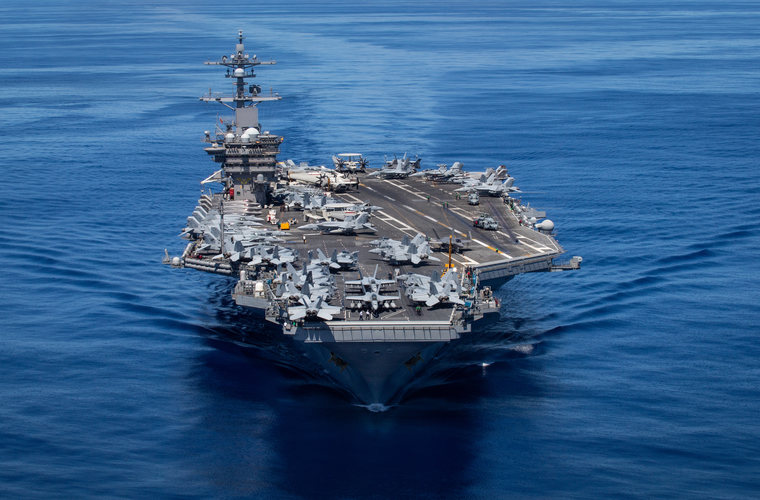 Multiple U.S. Defense officials speaking on background told The Debrief that sailors assigned to the Carl Vinson Carrier Group found out at the end of May they would be leaving for an unscheduled deployment within the next 11 days. Reportedly, the carrier group had been previously scheduled to deploy at the end of the summer.

Officials say the reason for the rapid deployment was large-scale movements by Russian naval forces seen heading towards the vicinity of Hawaii.

“Deployment cycles are typically very routine, highly coordinated, and scheduled well in advance,” said one current Navy official who was not cleared to speak on the record. “To pull ahead of a previously scheduled deployment for a classified mission set is extremely rare.”

So far, the Navy and Department of Defense have not acknowledged the Carl Vinson Carrier Group’s sudden quiet deployment. Instead, on June 17, U.S. Pacific Command released an article simply announcing the group was currently in the Hawaiian Islands Operating Area. Framing its sudden appearance as “integrated training operations with the U.S. Army, Marine Corps, Air Force, and Coast Guard.”

“Operating in Hawaii provides unique opportunities for Vinson to train jointly while positioned to respond if called,” Commander of the U.S. 3rd Fleet, Vice Adm. Steve Koehler, said cryptically, while avoiding mention of there being any real-world element to the group’s activities. “They train to a variety of missions, from long-range strikes to anti-submarine warfare, and can move anywhere on the globe on short notice.”

According to Russian news outlet TASS, exercises include all of Russia’s “Primorye Flotilla” (Pacific Fleet), auxiliary vessels, and up to 20 aircraft, including long-range bombers. “The drills involve up to 20 surface combatants, submarines, and support vessels,” specified the Russian Defense Ministry.

CBS News reports that Russian officials call the maneuvers the “largest exercise in the Pacific Ocean since the end of the Cold War.”

On Sunday, June 13, Three F-22 Raptors and a KC-135 refueling tanker were scrambled from Joint Base Pearl Harbor-Hickam in Hawaii. Initially, Air Force officials only said the scramble was an “irregular patrol” in response to a request by the Federal Aviation Administration (FAA). The FAA released a short message about the incident through Public Affairs spokesperson Ian Gregor, saying only, “The F.A.A. has a close working relationship with the military.”

Citing U.S. defense officials, CBS News reports the scrambling of the three stealth fighters and refueling aircraft were in response to Russian bombers that were picked up flying in the vicinity of the Hawaiian Islands. Reportedly, Russian bombers never entered the U.S.’s Air Defense Identification Zone, and the F-22s did not intercept the aircraft.

On May 26, several news outlets revealed that a Russian Navy surveillance ship was seen lingering off the western coast of Hawaii. Believed to be the Vishnya-class signals intelligence ship the Kareliya (SSV-535), the spy vessel was reportedly set up 13 miles from the Hawaiian island of Kauai, roughly one nautical mile outside U.S. territorial waters.

From its vantage point, the Russian spy vessel had a front-row seat to a failed air defense test by the U.S. Missile Defense Agency near Hawaii on May 27. According to reports, a pair of Standard Missile 6 Dual II (SM-6) air defense missiles failed to intercept a simulated ballistic missile attack during the test.

Popular Mechanics Defense reporter, Kyle Mizokami, theorized Russia might have been tipped off about the classified missile tests from Notice to Airmen (NOTAM) and Notice to Mariners (NOMAR/HYDROPAC) warning aircraft or ships to avoid the area.

Conversely, observation of the failed missile test may have been simply a bonus. The Kareliya- which specializes in intercepting and deciphering an adversary’s transmissions – may have actually been trying to measure the U.S.’s response to Russia’s Pacific Fleet, which was currently heading towards the area.

On Tuesday, CBS News reported that the U.S.S. Carl Vinson Carrier Group was “operating about 200 miles east of Hawaii, conducting a strike group certification exercise.” According to CBS, the certification exercise had been pre-planned but was moved closer to Hawaii in response to Russia’s presence.

Multiple defense officials tell The Debrief that planned exercises or deployment for the Carl Vinson Carrier Group had been previously scheduled for around September. These same officials said that in the last week of May, sailors were notified that plans to go underway had been moved up from months away to less than two weeks.

Defense officials tell The Debrief that sailors assigned to Carrier Strike Group One reported to their ships on June 6. Live web cameras of San Diego Harbor show the U.S.S. Carl Vinson left port around 10:30 am local time on June 7. Absent from its departure appears to be the usual fanfare. Namely “manning the rail” or having the crew “at quarters,” with sailors lining up at regular intervals along the weather deck rails in ceremony as the ship enters or leaves port.

Instead of replying to media requests, on June 17, U.S. Pacific Fleet Command released a short article and two images saying Carrier Strike Group One had arrived in the Hawaiian Islands Operating Area.

Rather than acknowledging the atypical nature of the carrier group’s arrival near Hawaii, Pacific Fleet Command’s article seemed to be a veiled notice to Russian forces operating nearby that the U.S. Navy was prepared to respond to any aggression towards U.S. interests in the Pacific.

NASA is Playing with Fire. In Space. Literally.

“With its recent modifications, no other weapons platform has the responsiveness, endurance, multi-dimensional capacity, inherent battlespace awareness or command and control capabilities of CSG-1,” reads the release by Pacific Fleet Command.

CSG-1 isn’t the only U.S. naval force that rapidly deployed to the Pacific in early June.

As part of a training drill dubbed Exercise Agile Dagger, one-third of the Pacific Submarine Force deployed from Joint Base Pearl Harbor-Hickam on June 3. According to the Navy, submarines from Pearl Harbor, Hawaii; Bremerton, Washington; and San Diego, California; are participating in Exercise Agile Dagger to “deploy on short notice to demonstrate their readiness, agility, and lethality.”

There have been evident tensions between the United States and Russia in recent months. Russia has been accused of committing numerous cyber attacks against the U.S., and several months ago, Russia amassed 100,000 troops on the border with Western-allied Ukraine.

However, there are no indications that any discussions regarding naval maneuvers in the Pacific came up during a meeting between U.S. President Joe Biden and Russia’s Vladimir Putin in Geneva on June 17.

Ultimately, why the Navy and DoD are so cagey about the Carl Vinson Carrier Group’s sudden deployment or what is going on in the Pacific isn’t entirely clear. It is, however, doubtful that things would ever escalate to the U.S. and Russia coming to blows.

Nevertheless, with so many American and Russian naval forces currently operating in the vicinity of Hawaii, one defense official told The Debrief, “Things could get pretty tense.”