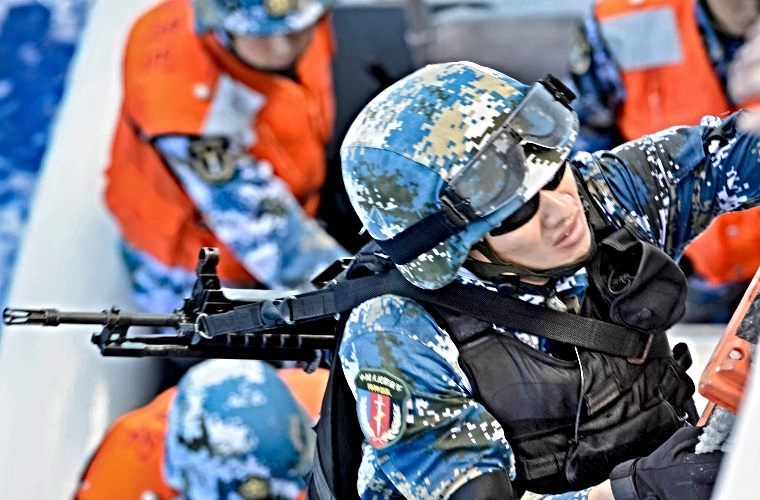 China May Just Be Sabre-Rattling, But Its Closest Neighbors Are Preparing for the Worst

As an emboldened China continues to develop its military capacity, make territorial claims, and generally assert itself, fellow Pacific nation-states are reevaluating their own military needs. Predictably, China’s neighbors have begun funding deterrence and defense programs in reaction to China’s rise (and U.S. encouragement). Without question, the Pacific will be the most consequential geopolitical hotspot of the 21st century. The decisions and commitments being made now will have far-reaching ramifications. Let’s take a look at how China’s ambitions are influencing some of her Pacific neighbors.

For almost seventy years, Japan’s USA-made constitution restricted Japanese military development to self-defense purposes. In 2015, recognizing China’s rise, the Japanese amended their constitution to allow the support of allies in conflict (in other words, help the U.S. in a conflict with China). The constitutional amendment was controversial domestically and internationally (given the transgressions Japan committed the last time they wielded an active military), but technically, Japan is still restricted from waging offensive operations.

Concerning relations with China, Japan is not merely a subsidiary of the U.S. Japan and China have their own complicated history. And the two nations have an ongoing, simmering territorial dispute over the Senkaku Islands– a strategically vital string of land in the East China Sea, south of Japan.

During the Trump administration, South Korea was concerned that U.S. troops would be withdrawn from the Korean Peninsula. But South Korea’s recent agreement to pay more for a U.S. troop presence will keep U.S. troops in South Korea for the foreseeable future. The U.S. presence will continue to irritate China, but otherwise upholds the status quo; South Korea’s primary objectives will remain unchanged: deterring North Korean aggression and maintaining stable relations with China.

Taiwan has a unique and unenviable relationship with China. China believes they rightfully possess Taiwan. So, cross-strait relations are inherently fraught on account of Taiwan’s proclaimed independence. And tensions appear to be escalating. In April, Taiwan reported that a “record number” of Chinese military jets violated Taiwanese airspace. The Chinese sortie included 18 fighter jets, four bombers, two anti-submarine aircraft, and an early warning aircraft. China’s intentions are unclear. But analysts agree that China is becoming “increasingly concerned that Taiwan’s government is moving the island towards a formal declaration of independence and wants to warn President Tsai Ing-wen against taking steps in that direction,” BBC China correspondent Stephen McDonell writes.

China’s posturing has Taiwan increasingly wary of an invasion. So, Taiwan is mobilizing to improve its military. “I have to be honest: Taiwan’s military needs to improve a lot,” Wang Ting-yu, a member of Parliament’s foreign affairs and defense committee, said in a telephone interview with the New York Times.

In August 2020, Taiwan’s government announced it would boost defense spending by 10 percent (in addition to the 5 percent raise from 2019). Taiwan’s defense spending now exceeds 2 percent GDP. The new funding will be used to bolster Taiwan’s reserve forces–which would be used to defend against a Chinese amphibious assault. Taiwan has also agreed to purchase 66 F-16 fighters (with a price tag of $8 billion) from America over the next decade.

Of course, “Taiwan cannot afford to compete plane for plane, ship for ship, tank for tank against the far larger People’s Liberation Army,” Steven Lee Myers and Javier C. Hernandez write in the New York Times. Fortunately for Taiwan, the U.S. is legally required to provide the island nation with defense support. But questions remain regarding whether the U.S. would undertake a direct confrontation with China on Taiwan’s behalf.

“To put it simply, Hanoi’s South China Sea strategy long has been based on four key components. These include “internationalizing the dispute,” handling the matter in a “multilateral framework” (primarily ASEAN), “deterring” China militarily insofar as possible, and keeping diplomatic channels with Beijing itself open,” Huong Le Thu, senior analyst at the Australian Strategic Policy Institute, writes for the Carnegie Endowment for International Peace.

Australia’s relationship with China is deteriorating, too. In response, the Australian government announced plans to increase defense spending to $212 billion over the next decade. Australia already spends 2.1 percent of its GDP on defense spending, making them the fifth-largest defense spender in Asia. But China’s militarization efforts–and behavior in the South China Sea–have inspired concern amongst Australian defense planners. “We…need to be prepared for a world that is less stable and more contested,” Treasurer Josh Frydenberg told Parliament.

With the spending boost, Australia intends to upgrade four military bases in their Northern Territory. And, in collaboration with the United States, Australia wants to produce its own guided missiles for the first time since the 1960s. Additionally, the government will upgrade its primary intelligence agency, the Australian Security Intelligence Organization.


China dominates the drone market, both from a commercial and militairy perspective.

The Royal Australian Air Force also plans to double its F-35 fleet (from 33 to 72) by 2023 while also working to develop an unmanned fighter. Meanwhile, the Royal Australian Navy hopes to add nine new Hunter-class frigates and 12 new Attack-class diesel-electric submarines.

Australia is working to augment its offensive capabilities, too. Currently under development: long-range anti-ship and air-defense missiles and hypersonic missiles. Isolated as Australia is, in a quiet geopolitical neighborhood, the only feasible target for such long-range weaponry would be China.

War with China would be devastating, but as the country continues to build up its forces and spread them out in South Asia, its closest neighbors are beginning to galvanize to the potential threat it may pose.