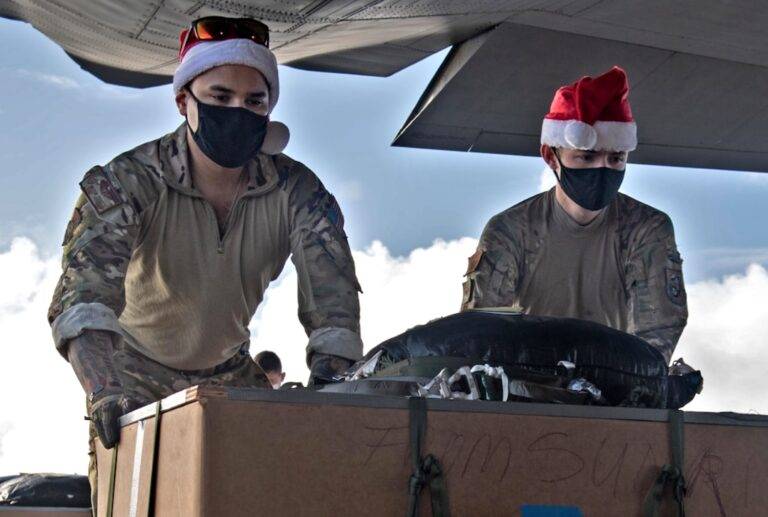 The Holiday Edition: Yuletide with the DoD

Welcome to this festive holiday edition of THE INTELLIGENCE BRIEF newsletter. Here are a few things we’ll be covering (with wreaths and eggnog) in this installment: 1) The DoD’s Christmas plans, 2) why a former government employee who studied UAP for the DoD is parting ways with the media company he helped make famous, and 3) how science is playing a role in holiday celebrations. Let’s dive in.

Everyone has their holiday traditions, and the United States Air Force is no exception. This year’s Operation Christmas Drop marks the 69th consecutive year of festive cargo being delivered to remote corners of the world, according to a statement at the DoD’s website. 2020’s haul included more than 3,200 pounds of cargo, mostly delivered to out of the way islands and other inaccessible areas.

Like so many other operations carried out by the U.S. military in 2020, ensuring care and precaution in light of the current pandemic introduced a different dynamic for the USAF, as it approaches seven decades in service making such Christmas deliveries.

“To come here and show that we can still do this mission, which we are accustomed to doing but, moreover, ensure that it takes care of people, is at the heart of it all,” said Air Force Tech. Sgt. Lou Splichal, senior enlisted leader of Operation Christmas Drop 2020, who called this year’s operation, and 2020 in general “a story of hope.”

A bit of offbeat history comes to mind here as an addendum to this story, which involves the curious “cargo cults” of the South Pacific. These religious beliefs were first observed in Melanesia decades ago, following contact between the indigenous residents and allied military forces during World War II. More specifically, it had been the cargo left behind by such military operations, around which anthropologists later discovered that religious worship had been carried out.

According to the South Pacific islanders who practiced such rituals, they believed that if they paid tribute to the cargo remnants left behind by Allied Forces in the wake of the conflict, more riches would eventually follow. Maybe several years from now, there will be all new holiday traditions that were inspired by the USAF’s 2020 Christmas deliveries… who knows.

Meanwhile back in Washington, the Trump Administration has granted extra time off to federal agency employees, which the president announced would be closed on Christmas Eve. The announcement was made via an executive order released last Friday. There are a few exceptions though: the order states that heads of individual executive departments and agencies may remain open at their discretion, and with regard “for reasons of national security, defense, or other public need,” according to the order.

While many federal employees will be getting time off, the same might be said for travel among members of the armed forces, as the Pentagon has updated a list of base locations with travel restrictions.

“I would suspect you’re going to see an increase of facilities going to Health Protection Condition Charlie,” said Pentagon spokesman Jonathan Hoffman during a recent press conference at the Pentagon, who noted that the Navy has already led the charge in doing so, and that other closures are likely to occur, based on “local communities and the operational needs of the services.” According to the current COVID-19 Travel Restrictions Installation guide, issued on November 16, 2020, restrictions on travel had been lifted at 141 of 231 installations (61%), while six locations had reinstated travel restrictions, and none had lifted those restrictions.

Like so much of the world, the U.S. military has been impacted by recent increases in COVID-19 cases in recent days, with more than 87,000 total cases among military members, according to statistics from December 10, 2020. Despite this, many significant achievements were made possible, which included the military’s newest branch, the Space Force, celebrating its first anniversary and on its way to tripling in size over the next year. Also related to the “final frontier,” NASA saw many advances in cooperation with its commercial partners SpaceX.

In recent days, it has also come to public attention that Luis Elizondo, a former DoD employee and star of History’s Unidentified: Inside America’s UFO Investigation, of which two seasons have aired, says he and two others plan to leave the To The Stars Academy. The news came in response to a question posed by reporter George Knapp, during a live airing of the late-night radio program Coast to Coast AM, which Knapp periodically guest-hosts.

“I think after three years… I can look back and I think we’ve achieved much of what we’ve set out to do,” Elizondo told Knapp. “TTSA, it’s no secret, also focuses on its entertainment division and, you know, let’s face it; guys like Chris Mellon and Steve Justice and myself, we’re not entertainers.”

Citing successes with projects that include the group’s participation on Unidentified, Elizondo told Knapp that “we have accomplished our mission,” saying the team had “done more in three years collectively than anybody I think really expected us to achieve.”

Elizondo first came to public attention with relation to the UFO subject in October 2017, in a Huffington Post article by investigative journalist Leslie Kean. “I was especially curious to meet Luis Elizondo because he ran a program at the DOD involving the study of anomalous aerial threats,” Kean wrote at the time.

“Luis had resigned this position literally the day before we met,” she said. “I was able to verify who he was and what his tasks were at the Pentagon.” One day after Kean’s Huffington Post article appeared online, the To The Stars Academy of Arts & Science (TTSA), a hybrid entertainment and science company spearheaded by musician Tom DeLonge, announced its official launch. According to a press release, the company would aspire “to explore exotic science and technologies with the infrastructure and resources to rapidly transition innovative ideas into world-changing products and services.”

On December 16, 2017, Kean went on to co-author a more extensive piece about Elizondo that was published in the New York Times, which presented further details about a DoD program called the Advanced Aerospace Threat and Identification Program, or AATIP.

Elizondo, whose official title with TTSA had been Chief of Security and Special Programs, plans to depart along with Christopher Mellon, who served as National Security Affairs Advisor at TTSA and also co-stars with Elizondo on Unidentified. Steve Justice, a former head of Advanced Systems at Lockheed Martin’s Skunk Works, was also named by Elizondo as being among those who would be leaving TTSA.

“We have enough momentum, enough inertia where we can shift gears and continue moving forward,” Elizondo told Knapp during the December 20 interview. “And to do that guys like me are looking at new and exciting ways to expand that conversation to an even larger audience while still staying true to our core mission of disclosure.”

On a final holiday-themed note, many people around the world are celebrating this holiday season in ways very different from how they might have done in years past. With public health and travel advisories warning against putting our loved ones at risks in order to spend the holidays together amidst the threat of COVID-19, there are still many things to be thankful for right now, and which set the current pandemic apart from its predecessors throughout history.

“This is not the pandemic of 1918,” writes political columnist Murray Mandryk for the Regina Leader-Post. “We carry around in our pockets access to everyone in the world … and access to all the world’s knowledge.” After sharing statistics comparing the 1918 pandemic to the one currently affecting people around the world, Mandryk notes that “as bad as things have seemed, communication, technology and science has kept us safe.”

Similar efforts have been underway elsewhere around the world this holiday season. In the United Kingdom, the staff of Imperial College’s Invention Rooms have aimed to incorporate science and technology into its holiday programs, which have included creating “science activity packs for local groups and clubs, phone tech support for the elderly and socially distanced family science workshops.”

In summary, we have much to be thankful for this year with the arrival of the holidays. Despite the challenges that so many of us have faced over the last several months, as well as those we have yet to face in the months to come, science and technology are helping us confront the current pandemic in ways that would have seemed inconceivable to past generations.

Here’s wishing a very happy holidays to all of you out there from us here at The Debrief, and may your season keep you safe, warm, and comforted by the good and prosperous times which lay ahead. Lastly, if you came across this over at our website and would prefer to have this newsletter sent directly to your inbox, you can subscribe and get email updates from us here, and read past editions of The Intelligence Brief here.