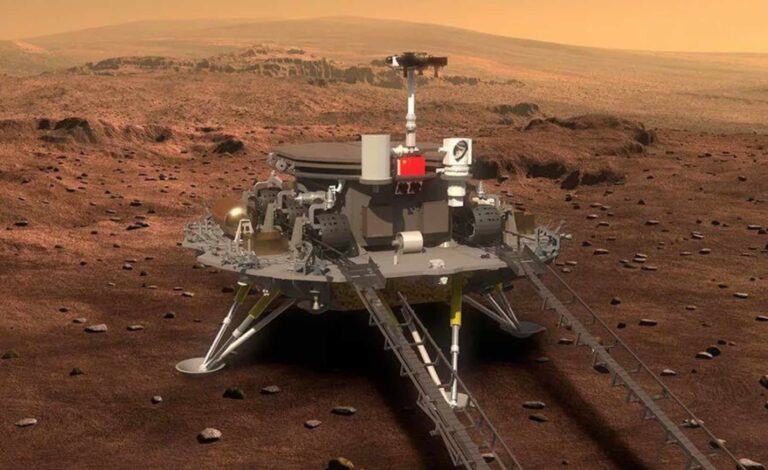 China has succeeded in placing one of its spacecraft on Martian soil in recent days, marking a new step in a series of significant advances toward its long-term space aspirations.

On Saturday, China’s Tianwen-1 mission landed its Zhurong rover within Utopia Planitia, an expansive plain within the largest recognized impact basin both on the Red Planet, and in the Solar System. Decades ago, this region had also been served as the landing site for the Viking 2 mission, which placed a lander there on September 3, 1976.

A statement that appeared in English on the website of the Chinese National Space Administration called the successful landing “a historic accomplishment in China’s space endeavors and making it the second country in the world to achieve the feat.”

Successfully placing a rover on Mars is no small technical feat. More challenging than a moon landing, it requires careful control and guidance systems that can help the landing craft to carefully navigate safely to the Martian surface, all of which requires years of planning in advance of the final “nine minutes of terror” where the craft descends more quickly through the planet’s atmosphere than information about its status can be relayed back to Earth.

According to the Tianwen-1 mission’s plans, the rover will remain at its landing site for several days as a series of diagnostic tests are undertaken before it commences exploration of the Utopia Planitia plain.

The successful landing of the Zhurong rover on Mars is not China’s only recent achievement in space. Last month, Tianhe-1, the main section of a permanent space station the country plans to build was carried into space. Next year, a series of missions will carry additional components into space that will complete the station’s construction phase.

Notably, China has remained excluded from operations aboard the International Space Station (ISS), which was constructed and operated primarily by the United States. In the past, astronauts from 15 other countries have been invited aboard, while China has remained officially excluded since 2011. The decision stems from a law passed by Congress which forbids engaging in operations with China in space for reasons related to national security.

The launch of Tianhe-1 last month is also not China’s first effort as far as space stations go; the country has launched two in the past, although its current effort will most closely resemble the International Space Station.

In recent weeks, Russia also announced it would be withdrawing from operations with the U.S. aboard the International Space Station, with plans to construct its own orbital station by 2025. Russian space agency Roscosmos has also said that it plans to collaborate with China on the construction of a lunar base, “guided by the principles of parity distribution of rights and obligations,” in a joint effort that will “promote cooperation in the creation of an open access missile system…aiming to strengthen research cooperation and promote the exploration and use of outer space for peaceful purposes for the interests of all mankind.”

Although China’s aims with Tiangong are not explicitly aimed at competing with the ISS, it seems evident that national pride, aided by political tensions on the ground, are bolstering the push by China and Russia to separate themselves from the space activities of other nations.

Following China’s successful landing of its Zhurong rover on Mars, the Xinhua News Agency said in an announcement that “China has left a footprint on Mars for the first time, an important step for our country’s space exploration.” Similarly, Chinese President Xi Jinping announced that it represented “an important step in our country’s interplanetary exploration journey, realizing the leap from Earth-moon to the planetary system and leaving the mark of the Chinese on Mars for the first time.”

China also received congratulatory messages from the international community. Notably, NASA’s Associate Administrator Thomas Zurbuchen said in a Tweet that he looks forward “to the important contributions this mission will make to humanity’s understanding of the Red Planet.”

While China is certainly making progress as a nation with its spacefaring aspirations, it has moved at a notably slower pace than the United States. However, with its plans to collaborate with Russia on a lunar base by as early as 2025, along with other plans it has for space missions, the country’s achievements in recent months do indicate that China is emerging as an increasingly formidable player in the future of space operations.