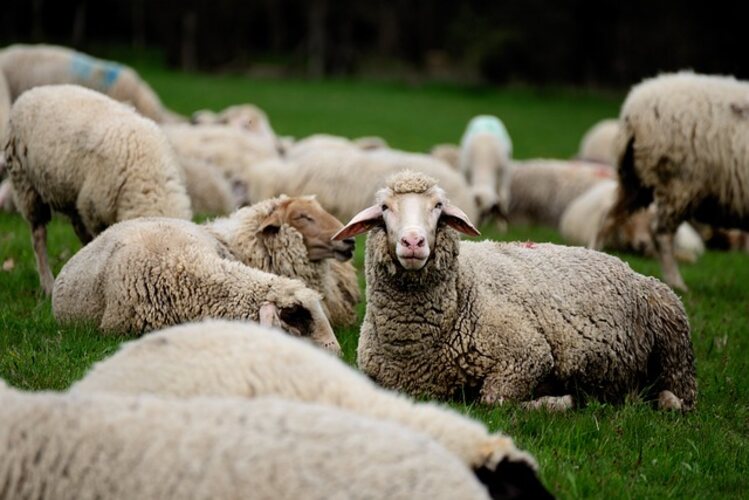 Next time you see someone using the term “sheep” to describe people who naively side with popular sentiment, it might be a good time to break out the famous quote by Inigo Montoya in The Princess Bride and popular internet meme: “You keep using that word. I do not think it means what you think it means.”

By examining the collective behavior of small flocks of sheep, researchers say they found that rather than blindly following a single master, sheep alternate the role of leader and follower, ultimately allowing the herd to achieve a form of “collective intelligence.”

“We wondered if there is a temporal leader at every moment, how does the group share and process information that each individual member of the group may have? Can the group perform information pooling to improve its ability to accurately navigate to a distant place?” said Dr. Fernando Peruani, a theoretical physics professor at CY Cergy Paris University and co-author of the recent study.

“We proved that by regularly changing the temporal leader, the group is able to exhibit information pooling and collective intelligence.”

The researcher’s findings were published in the journal Nature Physics.

The study of collective animal behavior has proven relevant to various disciplines, such as engineering, sociology, neuroscience, and economics. In its “Persistent Aquatic Living Sensors” (PALS) program, the U.S. Defense Advanced Research Projects Agency, DARPA, seeks to use the collective motion of marine life to monitor strategic waters for enemy submarines.

(For More on DARPA’s PALS Program: DARPA WILL USE MARINE LIFE TO SPY ON ENEMY SUBS)

In the wild, the collective decision-making process for many herd animals involves a hierarchical social structure, with a designated leader or leaders deciding when or where a group migrates, feeds, or avoids predators.

In an elephant herd, the oldest female takes on the role of the matriarch, passing on wisdom and making all critical decisions for the younger group members.

The benefit of a rigid hierarchical structure, with so few individuals involved in the decision-making process, is it allows an animal herd to respond to dynamic situations, such as the appearance of a predator, rapidly and as a collective.

Of course, the downside to having a single decision-maker is that a herd’s success is entirely dependent on the abilities of its leader.

One of the critical facets of collective animal motion that remains to be discovered is whether animals operating in hierarchical networks can engage in information pooling or collective intelligence to help a leader make decisions.

For example, when a flock would stop in a single location to graze, this was considered one phase, with a new phase beginning once the group resumed collective movement.

“From this perspective, questions on the mechanisms of information sharing and consensus decision-making adopt a new dimension,” explained Dr. Peruani.

Closely studying the instinctive sheep behavior as a collective of phases, researchers said they discovered that none of the existing flocking models were consistent with their observations.

Building a new mathematical model for collective animal motion based on their observations, researchers found that the sheep used a highly hierarchical process, with a single leader exercising complete control over the group. However, a flock leader’s reign was only temporary, with the sheep alternating the leader and follower role at each new movement phase.

“Importantly, each collective motion phase possesses a temporal leader,” explained Dr. Peruani. “The animals, by using a hierarchical interaction network to move together for a while, give full control of the group to the temporal leader, but there is also a rapid turnover of temporal leaders.”

By continuously rotating leaders, the sheep can pool information and achieve a form of collective intelligence amongst the flock.

“If a temporal leader has knowledge relevant to the group (e.g., the way out of a maze or the location of a food source), then the temporal leader will be able to efficiently guide the group. In this way, all group members take advantage of that knowledge.”

Researchers note that the random selection policy observed in their experiments, where all members of the flock had the same probability of acting as temporal leaders, is akin to the social science principle of democratic leadership.

Ultimately, the recent findings demonstrate that by using a temporal leadership strategy, small flocks of sheep can take advantage of both hierarchical and democratic schemes to achieve collective intelligence.

Similar experiments on larger herds and different animals are still needed to determine the extent to which the findings can be generalized. However, researchers say that many other herd animals likely use similar collective strategies.

“We believe that the unveiled intermittent collective strategy may be at work in a large number of gregarious animal systems, including, among many others, ungulates, elephants, baboons, wolves, and ducks, and can serve to design bio-inspired group navigation algorithms.”

Researchers say investigations are currently underway to examine the process of intermittent collective strategy in other animals and in more complex scenarios.

“We are comparing the spontaneous behavior of groups of lambs, young sheep, and adult sheep to investigate whether sheep learn to follow temporal leaders and to act as one over time,” said Dr. Peruani. “We are also investigating how groups behave in complex environments such as mazes or arenas with different food patches that can trigger a conflict of interests within group members.”