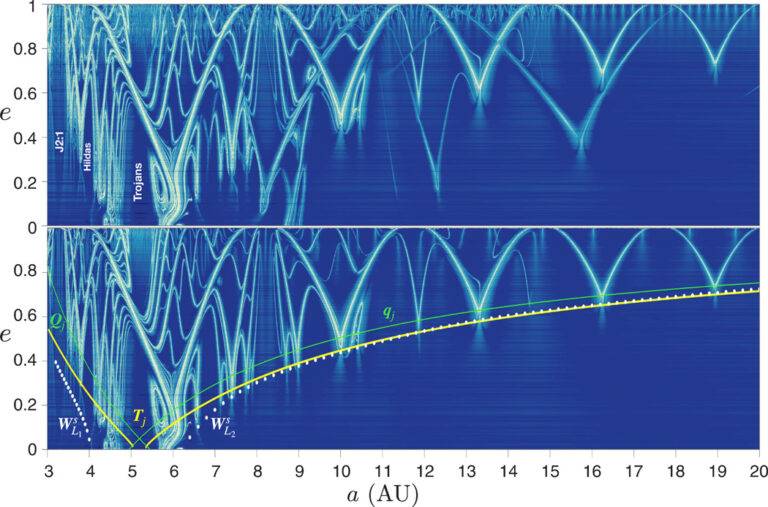 The Space Manifold, A Cosmic ‘Superhighway’ That May Speed Up Future Space Travel

Astronomers have discovered that invisible structures created by gravitational interactions within our solar system have created a “space superhighway” network, according to a study in Science Advances. These cosmic channels apparently permit rapid travel of celestial bodies through space, and there is speculation that this discovery could aid in our own exploration of the cosmos.

BACKGROUND: What is a Space Manifold?

A team of scientists—led by Nataša Todorović of Belgrade Astronomical Observatory in Serbia—reportedly observed that these superhighways are made up of a series of connected arches called space manifolds. Each planet was found to make its own manifolds, and when each planet’s manifolds are combined, they form what has been termed “a true celestial autobahn.”

Objects that travel along this network of manifolds can zip from Jupiter to Neptune (a distance of 1,301,969,708 miles) in just a matter of decades, rather than the alternative, which could take anywhere from thousands of years to millions. Space manifolds form channels between gravitational objects in space, and these connections enable fast transportation of various objects in the solar system.

ANALYSIS: How Does a Space Manifold Work?

It is known that regions of gravitational stability are fertile conditions for manifolds. This is what motivated Todorović and her team to set about investigating the details of these manifolds.

The team utilized a tool known as the fast Lyapunov indicator (FLI), often used to detect chaos in the cosmos. Since chaos in the Solar System is typically linked to the presence of stable and unstable manifolds, on short timescales, the FLI proved useful for locating these manifolds.

The team made the discovery when they analyzed numerical data of millions of orbits in the solar system. These orbits were contained to the known space manifolds. The researchers noted in the paper they used “the FLI to detect the presence and global structure of space manifolds, and capture instabilities that act on orbital time scales; that is, we use this sensitive and well-established numerical tool to more generally define regions of fast transport within the Solar System.”

The researchers then ran simulations to compute how particles would be affected as they approached different planets like Jupiter or Neptune and whether they would be affected by possible collisions and the manifolds themselves. The results indicate that these particles traveled much more quickly, reaching as far as Pluto in less than a century.

OUTLOOK: The Future of Space Travel?

This newfound discovery may very well help us better understand how comets and asteroids move around the Solar System, as well as their potential threat to Earth.

“More detailed quantitative studies of the discovered phase-space structures … could provide deeper insight into the transport between the two belts of minor bodies and the terrestrial planet region,” the researchers reported.

This information could also prove helpful for future space travel missions, where humans could explore the reaches of space that were never before thought possible.