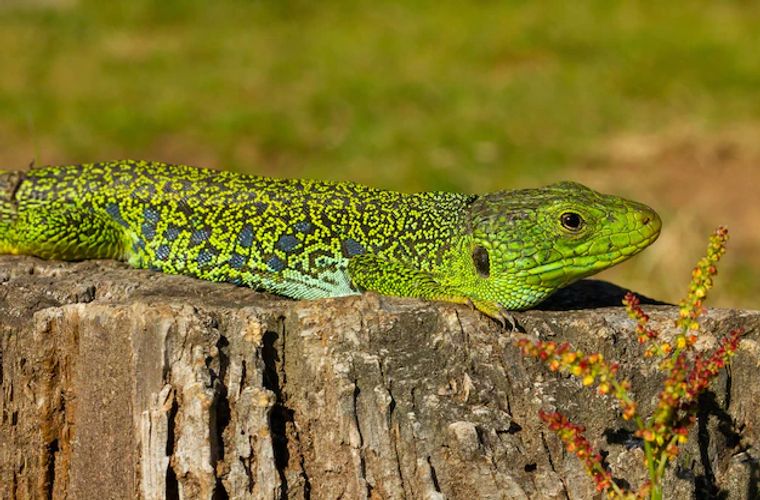 The science of animal camouflage has fascinated humans since antiquity. From resembling leaves and vegetation, to possessing colors that blend in with a variety of natural backgrounds, animals use many different types of camouflage to avoid predators.

Over the centuries, humans have also tried their hand at employing the camouflage process with some success. Still, the processes behind some types of camouflage remain elusive to scientists. While there are many different types of camouflage, a new study from the University of Geneva suggests that one thing they may have in common involves how camouflage patterns may all be inherently mathematical.

In order to better understand camouflage patterns, the researchers at the University of Geneva used ocellated lizards as their test subjects. These spiny green lizards are endemic to southwestern Europe. They can change their scale colors from green to black as they age, creating a labyrinthine pattern. Ocellated lizards mainly feed on larger insects, like beetles, and snails. They’ve most often been seen in Spain.

Analysis: The Math of Color Change

Published in Physical Review Letters, the researchers reported that the color change on the ocellated lizards’ scales varied depending on the colors of neighboring lizards. Because of this, the researchers wondered if there was a simple mathematical model that caused this camouflage pattern. In digging around, the scientists found the Lenz-Ising mathematical model to properly describe the lizards’ camouflage pattern.

This mathematical model, developed in the 1920s, was created to describe the behavior of magnetic ions. The ions can be in either a +1 or-1 state and interact with their closest neighbors. The model is usually organized in a square lattice of ions, but the researchers shifted it to a hexagonal pattern to fit the lizard’s scale shape. Within the Lenz-Ising model, all ions prefer to be in the same state, either +1 or -1. Similarly, the lizards prefer their scales to be either green or black. According to the University of Geneva Professor Michel Milinkowitch: “These labyrinthine patterns, which provide ocellated lizards with an optimal camouflage, have been selected in the course of evolution. These patterns are generated by a complex system that yet can be simplified as a single equation where what matters is not the precise location of the green and black scales, but the general appearance of the final patterns.”

Outlook: Do other Camouflage Patterns have Math?

As studies have shown, quite a few patterns in nature can be described using math. From the perfect swirl of a snail shell to the petal placement of a flower, researchers have shown that nature illustrates perfect mathematical models. These mathematical models may give scientists valuable information about how these patterns occur in different animals. For other scientists, these patterns, like the camouflage patterns, are also important as they can help predict animal genetics and behavior, especially if the species moves locations. Understanding camouflage can help make more accurate prediction models for several species that may be threatened by climate change, helping researchers to better understand how to help the species better survive.