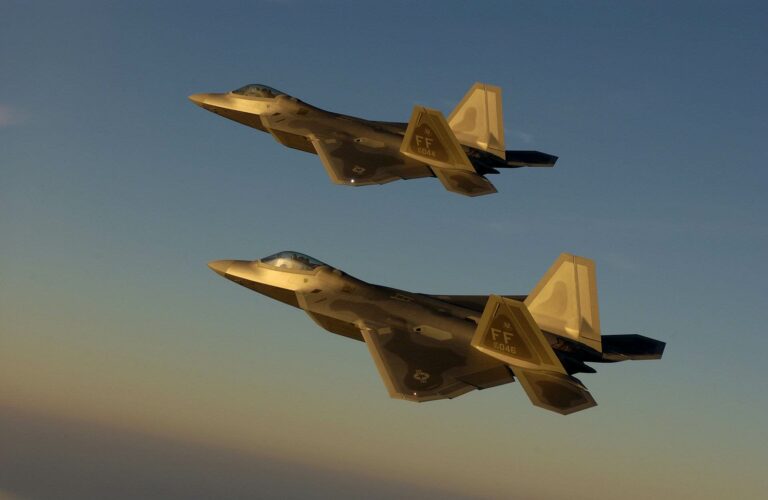 The F-22 Raptor is the world’s most advanced aircraft, featuring cutting-edge stealth technology and sophisticated sensor systems designed to secure air dominance. The aircraft is so formidable that, last week, the U.S. Air Force sent more than two dozen F-22 raptors to join Operation Pacific Iron, a complex exercise orchestrated to deter China from military conflict with the U.S.

Still, even the best of the best can’t escape retirement. Despite being the premier fighter jet and the second newest to the roster, the USAF is planning on taking the F-22 raptor out of its lineup by 2030. Replacing the F-22 is a secret new fighter jet from the Next Generation Air Dominance (NGAD) program, a secretive, fairly new technology program. Did we mention that this is all new and secretive?

Background: Rise and Fall of the F-22

While the Lockheed Martin F-22 Raptor is the second newest addition to the USAF, its origins can be traced back to the Advanced Tactical Fighter program from the early 1980s. The F-22 was envisioned as the successor to the F-15 and a fierce competitor to the foreign fighter jets being developed in the Soviet Union—both of which it succeeded in doing.

As one of the world’s only fifth-generation fighters (alongside the F-35), the F-22 has air-to-ground capabilities, including a high degree of stealth, supercruise, thrust-vectoring for high maneuverability, and integrated on-board and off-board sensor systems to provide fast information. The arrival of the F-22 was “game-changing” and the jet has been anointed the “crown jewel” of the nation’s military arsenal.

Of course, all that prestige comes with a price. In the early days of the F-22 program, the USAF wanted 750 of the fighter jets. In the mid-2000s, after disputes with the Department of Defense, it ended up settling for the production of 195 aircrafts for a total cost of $67 billion, a sum that doesn’t include ongoing maintenance. The question the DoD posed back then was: why pay for the best aircraft when air combat is dead?

A bizarre question given the geopolitics of the moment, but in the early 2000s, in the wake of the U.S. invasion of Iraq and Afghanistan, the primary concern for the Pentagon was that of small guerilla groups and poorly-armed militias. The F-22 seemed like “overkill” at a time when unmanned aircraft sufficed and both Russia and China lagged behind in the development of similar technology. Air superiority was deemed easily achievable because there was no viable competition.

In 2009, Defense Secretary Robert Gates said, “The F-22, to be blunt, does not make much sense anyplace else in the spectrum of conflict.”

“If this was a requirement, it would’ve been used,” Air Force spokesperson Maj. Chad Steffey told ABC News.

Analysis: “It’s just not going to be the right tool for the job”

A surprise to nobody reading this: China and Russia have seriously upped their game. With their own fifth-generation fighter jets—China is thought to possess between 20 to 24—and their inventory only expanding, the U.S. is taking their threat to air dominance very seriously.

So why retire the best fighter jet there is? Unfortunately for the F-22, it just never seems to be the right time. The acclaimed fifth-generation raptor will be replaced by a younger and savvier sixth-generation fighter jet.

In an interview with Defense News, Lt. Gen. Clinton Hinote, the service’s deputy chief of staff for strategy, integration and requirements, said, “By about the 2030 timeframe, you’re talking about a 40-year-old platform [in the F-22], and it’s just not going to be the right tool for the job, especially when we’re talking about defending our friends like Taiwan and Japan and the Philippines against a Chinese threat that grows and grows.”

This past May, USAF Chief of Staff Gen. Charles Q. Brown Jr. announced plans to whittle down the Air Force’s fighter inventory from seven to four. The goal isn’t to have the “right mix” of fighters for the future, but rather to assemble a range of options that can shift and evolve as the threat does.

“I’m really looking for a window of options,” Brown said at a defense program conference, because “the facts and assumptions based on the threat will change over time.”

Outlook: Legacy of the F-22

Even though it’s being called into retirement early, the F-22 Raptor is still a treasured member of the USAF fighter arsenal. With so few fighter jets left that are actually operational, the care and proper usage of the remaining F-22s will be at the forefront of USAF priorities until its replacement is ready.

The F-22’s successor, the secret new fighter jet, came from the Next Generation Air Dominance program (NGAD) and its prototype is already up and running after only one year of design and development.  The modestly funded NGAD program—costing the USAF $9 billion, a steal compared to the F-22s—hopes to have a functional replacement by 2030.

What’s coming with the NGAD you ask? Well, from what we know so far, this program will examine five major technologies that are likely to appear in the next-generation aircraft, with the goal of enhancements in “survivability, lethality, and persistence.” So yeah, it’s a big secret.