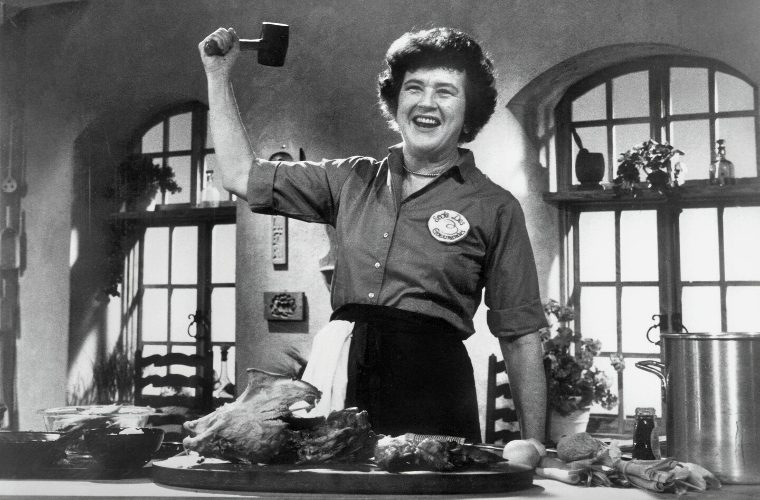 Celebrated chef Julia Child is best remembered for introducing French cuisine to American audiences. But she didn’t always cook Vichyssoise or Quiche Lorraine. “My first big recipe was shark repellent that I mixed in a bathtub for the Navy, for the men who might get caught in the water,” Child said years later.

Child was born in 1912, in Pasadena, California. She studied history at Smith College, graduating in 1934. Standing six feet two inches,  Child played tennis, golf, and basketball. Yet, when the Second World War began, Child was rejected from the Women’s Army Corps and the US Navy’s WAVES on account of her height. Undeterred, she joined the CIA’s predecessor, the Office of Strategic Services (OSS), in 1942.

At OSS, Child was promoted from file secretary to executive assistant before “she found herself assigned to an experimental research project called the Emergency Sea Rescue Equipment Section (ERE),” Jennet Conant, author of A Covert Affair: Julia Child and Paul Child in the OSS, said. One of the ERE’s main projects “was developing a shark repellent that could be rubbed on pilots who had been down at sea.”

Russ Parsons, an LA Times food editor, wrote a 2008 blog post that mentioned speaking with Child about her time working on shark repellent:

“I’ll always remember her telling me about her office’s frustration with the Navy’s refusal to help develop a shark repellent “because we couldn’t get the Navy to admit that sharks ate Navy men. They didn’t like to say, ‘Dear Mrs. So-and-So, your son was eaten by a shark.’ They’d much rather say: ‘Your gallant son was lost at sea.’ Then one day, a shark was caught, and they opened him up and found he had some undigested parts of people in his stomach. One of them still had fingerprints, and it turned out to be a Navy man. There was such glee in our office that they had finally proven a Navy man could be eaten by a shark.”

Indeed, sharks were a problem. Fear of shark attack was a leading cause of low morale amongst service members in the Pacific theater. General George Kenney fully supported the use of the P-38 fighter plane in the Pacific because the plane’s twin engines and long-range reduced the likelihood of engine failure or fuel shortage plunking a pilot in the Pacific.

“You look down from the cockpit, and you see schools of sharks swimming around. They never look healthy to a man flying over them,” Kenney said.

“American servicemen became so squeamish about the specter of being eaten during long oceanic campaigns that U.S. Army and Navy intelligence operations engaged in a publicity campaign to combat fear of sharks,” Professor Janet M. Davis writes in The Conversation. Developing a shark repellent became a priority. The Navy began coordinating with Child’s OSS office to develop something that would keep opportunistic sharks away from downed service members.

“Copper acetate was mixed with black dye, which was then formed into a little disk-shaped “cake” that smelled like a dead shark when released into the water. These cakes could be stored in small 3-inch boxes with metal screens that allowed the repellent to be spread either manually or automatically when submerged in the water. The box could be attached to a life jacket or belt, or strapped to a person’s leg or arm, and was said to keep sharks away for 6 to 7 hours.”

Lingering concerns aside, the media discovered and then promoted the shark repellent.

“Requests for the OSS shark repellent began to pour in from the Army Air Corps and the Coast Guard,” Steve Balestrieri writes in SOFREP. “And while the actual value of the repellent may have been dubious, the effect on morale was huge.”

The Navy used Child’s shark repellent until the 1970s. And rumor has it that NASA used the repellent to keep sharks away from astronauts and equipment after splashdown. Child, of course, went on to become a transcendent culinary star, achieving success in print and television. Her debut book, Mastering the Art of French Cooking, is still considered a seminal culinary work. Her television shows, especially the Emmy-winning, The French Chef, made her a household name. In 1996, she was voted one of TV’s top 50 stars. In 2009, Meryl Streep won a Golden Globe for portraying Child in Nora Ephron’s  Julie & Julia.

And it all started with clandestine shark repellent.