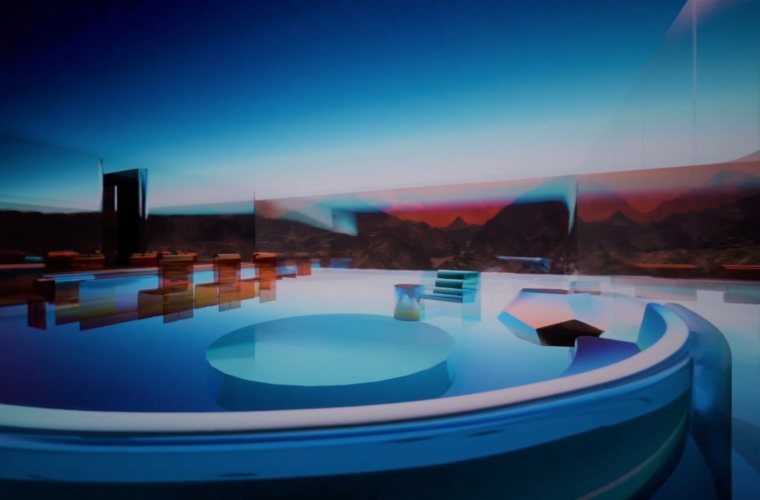 This “Virtual Real Estate” NFT Sold For Half a Million Dollars

NFTs are specialized, encrypted digital tokens that can verify authenticity and ownership. Any digital file, be it an image, text document, or a 3D rendering, can be duplicated. However, when “minted” as an NFT, that file becomes secured in a digital infrastructure called a “blockchain.” Even though copies can be made, the owner of the NFT can owns the original version of that file.

NFTs have been around for several years now; however, buyers seem to be purchasing virtual real estate, which makes up the “Metaverse,” a sort of digital landscape that expands out from our daily geographical world. A simple way to picture it is as if “The Sims” and “Minecraft” became a virtual world where one could own things and show a deed to their ownership. You (well, the digital you) could live in a “virtual house.”

Kim sold the virtual property, and through avatars, users can “live” and sell property in this virtual world. Microsoft Mesh just debuted its virtual-avatar-based platform that expands the opportunities for more virtual worlds like the “Metaverse.” Kim, a self-referred “Techism artist,” worked with Jeff Schroeder of The Smashing Pumpkins to add a musical ambiance to the home.

“Mars House represents the next generation of NFTs,” Kim told CNN. “It is a sign of things to come, as we enter an AR (augmented reality) interfaced future, with the launch of Apple AR glasses and AR contact lenses. Art, NFTs, cryptocurrencies…these sweeping changes and ideas of how we will live with digital assets is becoming a reality and will create a global paradigm shift.”

ANALYSIS: How does an NFT “Virtual Real Estate” Sell for Half a Million Bucks?

NFTs have been in the news recently, as Twitter CEO Jack Dorsey sold the first-ever published tweet as an NFT for $2.9 million. The tweet from March 21st, 2016, simply said, “just setting up my twttr.” On March 11th, NFT artist Beeple became one of the most expensive artists to date, with a record-breaking artwork that sold at auction for $69 million.

“The NFT market is all about what people agree on as having value, including things that exist only virtually or digitally,” Timothy Boucher, an NFT artist who goes by ‘NFT Trillionaire, World-Famous Crypto Artist’ online, told The Debrief. “Almost anything can become valuable as an NFT under the right circumstances. It just depends on the people, the moment, and the asset.”

The market for high-end virtual housing isn’t the only real estate seeing record-growth. According to market data, the current housing market in America is a seller’s market; as the past 30 weeks, houses have shown double-digit price growth. Maybe the only homes some can afford will be in the “Metaverse.”

Several critics believe that the NFT craze is a bubble that will eventually pop and even double down, calling the entire affair a “get rich quick scheme.” NFTs, much like cryptocurrency blockchains and the actual currencies themselves, are unregulated. At any moment, the whole ‘virtual house of cards’ could simply collapse.

“NFTs are growing because crypto is becoming mainstream, and people are seeing the value finally,” Boucher explained. “NFTs are not a bubble. They’re a sea change, both technologically and culturally.”

For those used to being stuck inside during the pandemic, purchasing virtual real estate could be a viable option for entertainment value, peace of mind, and maybe, in some weird way, an actual investment.

“Virtual land has been selling for some time at all price points, so this is no surprise. As AR and VR consumer tech takes off, and collides with gaming, these kinds of sales of virtual objects and spaces are going to explode,” Boucher believes.

OUTLOOK: You Probably Don’t Need Virtual Real Estate But The Future is Weird…

Gaming, augmented reality, and advanced artificial intelligence are all coming together to help people escape from physical reality. During the pandemic, while many were trapped inside and glued to their computers, it makes sense that some found refuge in virtual worlds where they can “go outside” and interact with others. With a growing virtual housing market, NFT artists, and forms of cryptocurrency gaining popularity, it is easier to “live” online.

NFTs are not brand new, and their popularity may wane in time. However, technology that certain NFTs play a role in, like “virtual houses” for VR and AR applications, may have a long future as our desire for more immersive entertainment experiences continues to grow. Boucher expressed that our entire framework of ownership changes in the NFT landscape, which isn’t difficult to grasp today. Imagine explaining to someone in 1999 that people would pay money for a digital version of a movie but never actually own a physical copy of it.

“[NFTs] enable creators to get paid directly by audiences instantly. They also create secondary markets and all kinds of other weird, exciting cross-over opportunities with crypto and blockchain technology,” Boucher concluded. “This is just the beginning.”

The Debrief’s MJ Banias aided in the reporting for this article.

Have you purchased an NFT? We’d love to know more. Follow us on Twitter, Facebook, and Instagram to weigh in and share your thoughts. You can also get all the latest news and exciting feature content from The Debrief on Flipboard and Pinterest. And subscribe to The Debrief YouTube Channel to check out all of The Debrief’s exciting original shows: The Official Debrief Podcast with Michael Mataluni, DEBRIEFED: Digging Deeper with Cristina Gomez, and  Rebelliously Curious with Chrissy Newton.