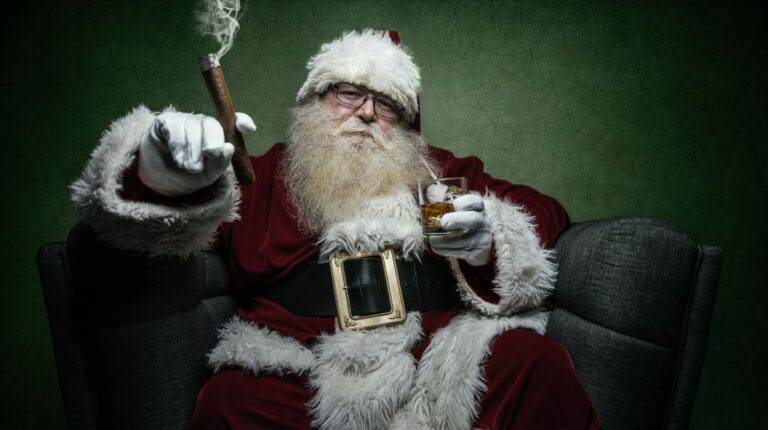 Is Santa Claus a Myth or a 5th Dimensional Time Traveler?

Whether you are a five-year-old child or a Ph.D. level physicist, you have, at one time or another, asked yourself, “How does Santa Claus deliver all of those gifts in just one night?” It’s a riddle that has plagued both parents and mathematicians for ages, but one that quantum physics and time travel may finally be able to answer.

Therefore, we at The Debrief ask, if Santa Claus is, in fact, real (and as anyone who has awakened to find carefully wrapped goodies, an empty plate of cookies, and half a glass of milk will attest, he most definitely is), then how on Earth does he do it?

First, the numbers, as broken down by the 2 Minute Classroom on YouTube.

(Note: like the embedded video, we are calculating based on North America. If other countries want to figure out how Santa delivers gifts to the whole world as Forbes magazine did in 2018, let them do their own math.)

Polls indicate that 90% of North Americans celebrate Christmas. Dividing that figure by the total population of the continent, which is 580 million, we find that Santa must deliver gifts to 522 million people. We’re not numbers guys, but that sounds like a lot.

Fortunately, our beloved Mr. Claus, or Santa as his friends call him, visits households, not people. So, once you know the average number of people per household in the U.S., Canada, and Mexico, and after adjusting for each population, you find that there are about 182 million households in North America. Not as bad, but still a lot.

Based on a 6 hour night, which allows Santa to start at the wee hour of 1:00 AM Eastern and travel west, before finishing at 3:00 AM Pacific, placing the entire journey within the “almost everyone is asleep” safe-zone, our jolly old elf only has about 118 milliseconds per household to do his deed. Or more plainly, he has to visit 8,425 houses per second. That’s barely one ten-thousandth of a second per domicile to land on the roof, descend the chimney, deposit gifts, drink milk, eat cookies, climb back up the chimney and fly to the next house. And all in the dark! Yikes!

Even traveling at near-light speeds to take advantage of Einsteinian Space/time dilation, the mere physics of this type of rapid acceleration and deceleration would inevitably turn Kris Kringle and his eight tiny reindeer into a pile of mush before they even reached the first house. As explained in more detail by the Forbes article:

“Going from 0-to-60 miles-per-hour in a tenth of a second is a disaster for most people; you’d pass out (or worse) from the acceleration. That’s assuming you experience only 27 gs of force, where 1 g is the acceleration due to Earth. But Santa, to reach just his average speed traveling house-to-house, requires 1.5 billion gs.”

So does that mean Santa’s yearly gift-giving bonanza is a myth, stymied before it even starts by the universe’s immutable laws of Newtonian physics? Maybe not.

“Children shouldn’t put too much credence in the opinions of those who say it’s not possible to deliver presents all over the world in one night,” said NC State’s Doctor Larry Silverberg back in 2011 when addressing the seemingly impossible task. That’s because, according to his theory, our jelly-bellied holiday hero is taking advantage of a construct of theoretical physics called a “relativity cloud.”

“Based on his advanced knowledge of the theory of relativity, Santa recognizes that time can be stretched like a rubber band, space can be squeezed like an orange, and light can be bent,” the doctor posits. “Relativity clouds are controllable domains – rips in time – that allow him months to deliver presents while only a few minutes pass on Earth. The presents are truly delivered in a wink of an eye.”

In a previous post on the subject, Dr. Silverberg initially guessed how Santa might have used jetpacks, extreme speeds, and other advanced technologies at a time when human populations were much smaller. But in the last few decades, Saint Nick has had to change his approach. Or, as the doctor states, “by the early 1950s, [Santa] had found a way to take advantage of relativity clouds.”

The good doctor also muses about such scientifically viable wonders as genetically enhanced reindeer (glowing red noses, anyone?), a technologically advanced sleigh, and a nano-toymaker gift bag that lets Santa fabricate toys while inside the children’s homes. Still, it is the use of theoretical physics and these “relativity clouds” that genuinely allows St. Nick to manage his whirlwind gift-giving tour.

So that’s it! Santa is real, and quantum physics proves it! Hooray for Christmas! Now, if we could only figure out how he eats over 300 million cookies in one night, we’d really be on to something.