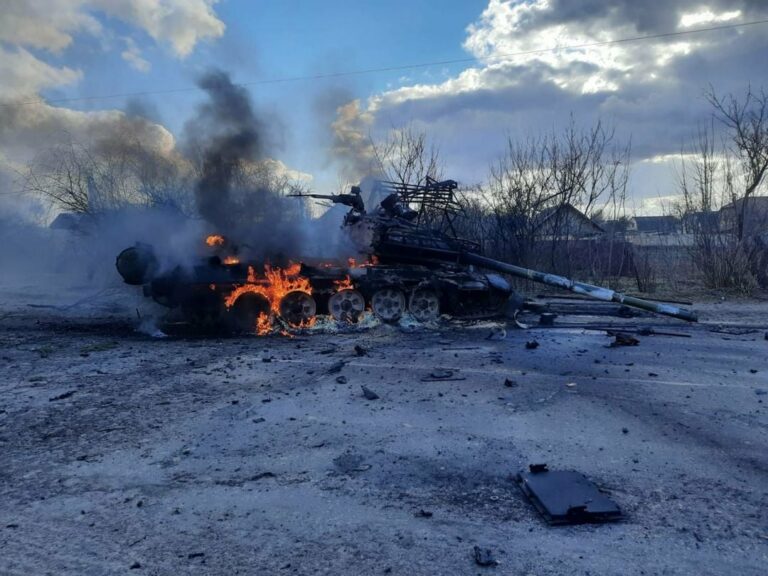 On Thursday, February 24, Russia launched a full-scale invasion of its southwestern neighbor Ukraine in the early morning hours. The action marked a significant escalation between the countries, which have been in a state of conflict since 2014 when Russia first supported an invasion of the eastern Donbas region and annexed the coastal peninsula of Crimea.

Here is The Debrief’s update of the conflict as of the morning of February 28.

War plans leaked in late 2021 suggested Russia’s initial invasion plans were to conduct an expanded version of the U.S. military’s “thunder run” into Iraq in 2003. These plans included the seizure of major population centers while forgoing the rural countryside.

Since Russian President Vladimir Putin announced the start of a “special military operation” on February 24, it appears that Russia has indeed tried to implement these plans to force Ukraine into capitulation and force a regime change.

Within the first 100 hours of the conflict, it appears that Russia has failed to achieve these initial strategic goals. Senior U.S. defense officials have said Russia has been increasingly frustrated by a very determined Ukrainian defense, which has bogged down the progress of its troops along the northern axes towards the capital city of Kyiv.

Reports on the ground suggest Russian forces in northeast Ukraine are suffering from morale and supply issues; indicative of poor planning and ad hoc command structures.

Several videos released by Ukrainian officials have shown captured Russian troops claiming to have been unaware they were being sent into an active warzone. Many have said they thought they were participating in a military exercise or going in to be welcomed by Ukrainians as “liberators.” The Debrief cannot independently confirm the veracity of the videos or comments by Russian POWs.

Other indications, however, support the claims of poor Russian morale and logistics.

The Ukrainian General Staff reports Russian forces are “experiencing an acute shortage of fuel and food and are increasingly using Belarusian rail networks to supply Russian forces in Ukraine.”

From February 26 through the morning of February 28, Russian ground forces primarily conducted an operational pause along the northern and eastern axes. The break is likely to allow the Russian military to move additional combat reserves and supplies to support what has become a more significant and more complex conflict than Russia initially expected.

According to the Ukrainian Armed Forces, throughout February 26 and the morning of February 28, Russia has continued air and missile strikes against military and civilian airports, military control points, air defense systems, critical infrastructure, fuel, and munitions depots.

Additionally, numerous instances of civilian buildings and residential areas being struck by Russian missiles and in-direct artillery fire have been reported. Multiple videos, images, and statements by eye-witnesses and journalists on the ground have backed up reports of non-military, civilian areas being targeted by Russian fire.

On February 28, The Ukrainian General Staff claimed missile strikes had explicitly been launched against residential buildings in the cities of Zhytomyr and Chernihiv.

The Debrief cannot independently verify these figures and so far the Russian Federation has not provided any casualty reports.

There continue to be threats of small bands of Russian saboteurs operating within Kyiv. Additionally, The Times reported Monday morning that more than 400 mercenaries from Russia’s infamous Wagner Group are reportedly in Kyiv with orders from the Kremlin to assassinate Ukrainian President Volodymyr Zelensky. These reports have not been independently verified by The Debrief. However, U.S. intelligence reports say that the decapitation of Ukraine’s elected government is Russia’s primary goal.

As of late morning on February 28, Kyiv remained firmly in the control of Ukrainian forces.

Later in the daylight hours of February 27, light infantry troops, believed to be either Spetsnaz (special forces) or VDV (airborne), entered Kharkiv for the first time. Videos posted online showed dismounted troops confusingly walking through Kharkiv. The ground forces lacked armored support and were only complemented by GAZ Tigr vehicles (Russian Army equivalent to the ubiquitous U.S. military HUMVEE). The troops didn’t appear to have any discernible objective, further raising questions about the status of Russia’s strategic thinking on the ground.

Within an hour of forces seen in Kharkiv, the Ukrainian Armed Forces said the troops had been neutralized. Videos posted online showed destroyed GAZ Tigr vehicles and dead Russian soldiers lying in the streets.

Overnight, large explosions were reported in Kharkiv. On February 28, around 10:30 a.m., airstrikes were reportedly carried out by Russian Su-34 fighter/bomber jets.

As of February 28, Kharkiv remains under Ukrainian control. Russian forces in northeast Ukraine have been halted along a parallel line following the P67 highway.

Additional Russian forces continued to advance north towards Zaporizhia. They will likely seek to take the city in the coming days.

Ukrainian and Russian officials have agreed to sit down for peace talks at the Ukraine-Belarus border. The discussions are supposed to kick off at 6 a.m. on February 28. Ukrainian officials have expressed little optimism that negotiations will result in an end to Russia’s attack.

Could Sound Waves be a Viable Cancer Treatment Option?

On February 27, Russian ally Belarus adopted a new constitution that would pave the way for hosting Russian nuclear weapons and allow Belarus to enter the war against Ukraine. U.S. intelligence officials say they expect Belarus to throw its roughly 50,000-strong army into the conflict at any time now.

So far, Belarus has only allowed Russia to stage equipment and launch attacks from its borders. However, its full involvement could open up another line of conflict. Belarusian forces could be used to reinforce the siege on Kyiv or to push towards Ukraine’s western regions to attempt to cut off ground supplies coming from NATO and the West.

Also, on February 27, Putin ordered Russia’s nuclear and strategic missile forces on their highest alert status in response to “aggressive statements in the West.”

“President Putin is continuing to escalate this war in a manner that is totally unacceptable, and we have to continue to condemn his actions in the strongest possible way,” said U.S. Ambassador Linda Thomas-Greenfield.

Russia is likely to resume major offensive operations in the evening hours of February 28 or early morning of March 1.

Russia still maintains an overwhelming advantage in net combat strength. It has sufficient conventional military resources to reinforce its axes of advance. Provided commanders have recalibrated the offensive strategy and overcome logistic failings, the tide of war could rapidly change in Russia’s favor in the coming days.

100 hours into the conflict, Ukraine’s air defense capabilities and air forces remain active. It’s assumed that Russia has refrained from using its full complement of air and missile capabilities. By sheer attrition, Russia should eventually wear down Ukrainian air defense and air force out of the fight.

Russian success along the Crimea axis represents Ukraine’s most dangerous immediate situation. If unchecked, Russian advances in the south threaten to unhinge its successful defense of Kyiv and the northeast.

That said, some commentators have suggested that hidden corruption, misreporting, and propaganda, have caused Western defense analysts to misinterpret the overall capabilities of the Russian armed forces. According to some, indications are that after months of troop and equipment build-ups along its border, Russia is reaching its logistical limits, given Ukraine has put up such a staunch defense.

So far, Ukrainian combat effectiveness and morale have remained extremely high. A reported 70% of Ukrainians believe their armed forces will defeat Russia, and 91% support the actions of President Volodymyr Zelensky.

Should Russian forces achieve a successful breakthrough into any of Ukraine’s major cities, like Kyiv or Kharkiv, it is highly likely they will then be confronted with intense and violent urban warfare by a very determined defender.