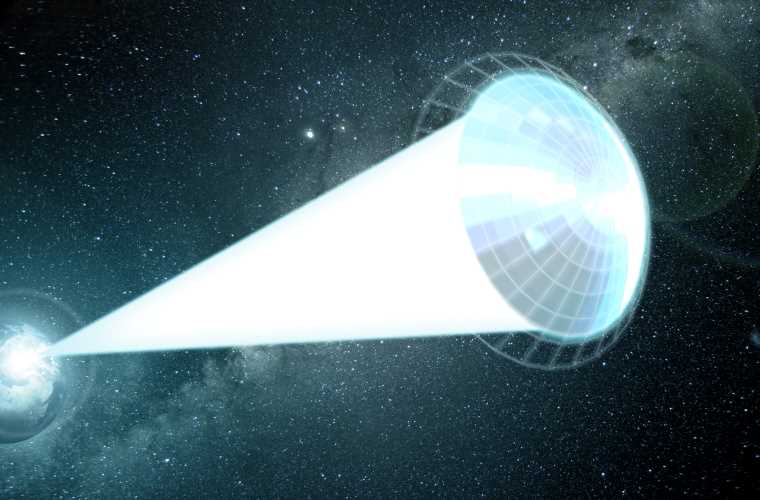 Researchers have proposed a light sail design that should be able to survive the stresses of an interstellar voyage. As part of NASA’s Breakthrough Starshot Initiative, the engineers behind the new light sail design say that their proposed structure could withstand the immense laser light pressures (and heat) needed to accelerate them to 20% the speed of light.

Space is big. Even flying to the moon takes days, and hopping a rocket ship to Mars takes months. Rockets are wholly impractical for trips to other star systems, with proposed travel times extending into the tens of thousands of years. Theoretical propulsion concepts like WARP drives might be able to make the trip to another star in the distant future. But at present, the technological capabilities needed to design and build such science-fiction-inspired spacecraft are unavailable.

Now, a group of researchers working on a directed energy propulsion concept that employs a light sail say they have figured out how to manage the heat and stress that lasers powering their craft will experience.

To address the heat and pressure issues a laser-powered light sail is expected to experience, a team led by Igor Bargatin, an Associate Professor in the Department of Mechanical Engineering and Applied Mechanics at the University of Pennsylvania, zeroed in on the materials and design specifications that they believe can do the job.

“Reaching another star within our lifetimes is going to require relativistic speed or something approaching the speed of light,” said Bargatin in a press release announcing the proposed sail design. “The idea of a light sail has been around for some time, but we’re just now figuring out how to make sure those designs survive the trip.”

The team’s primary concern is the extreme heat and pressure from the lasers that will power the light sail across the void of space. In a solar sail, where the sun’s light provides propulsion, much like the wind in a conventional sailboat, pressure is a minimal concern. However, if future Breakthrough Starshot mission planners are correct, an array of powerful lasers will be needed to propel their microchip-sized probe up to 20% light speed. Furthermore, according to the press release, those lasers will have to focus their collective energy on “a three-meter-wide structure a thousand times thinner than a sheet of paper.”

In the first of two papers on the subject, the research team determined that their target light sail should not be flat as a drum but instead should be allowed to billow out like a spinnaker on a sailing ship. This shape should enable it to share the tension load of the light pressure more evenly, reducing the risk of ripping or tearing.

“The intuition here is that a very tight sail, whether it’s on a sailboat or in space, is much more prone to tears,” explained Bargatin. “It’s a relatively easy concept to grasp, but we needed to do some very complex math actually to show how these materials would behave at this scale.”

“Laser photons will fill the sail much like air inflates a beach ball,” added postdoctoral researcher Matthew Campbell, a member of Bargatin’s group and lead author on the first paper. “And we know that lightweight, pressurized containers should be spherical or cylindrical to avoid tears and cracks. Think of propane tanks or even fuel tanks on rockets.”

The team also determined that engineers could make the sail from ultrathin sheets of aluminum oxide and molybdenum disulfide, both of which are available materials.

In the second paper, the team looked at the issue of heat dissipation, which is a serious concern since the laser energy hitting the sail will be millions of times more potent than the solar wind that would strike a conventional solar sail. Under this type of intense heat, even the most robust of materials can melt away.

“If the sails absorb even a tiny fraction of the incident laser light, they’ll heat up to very high temperatures,” explained Aaswath Raman, an Assistant Professor in the Department of Materials Science and Engineering at the UCLA Samueli School of Engineering and the lead author on the second paper. “To make sure they don’t just disintegrate, we need to maximize their ability to radiate their heat away, which is the only mode of heat transfer available in space.”

The St. Clair Triangle UFO Incident of 2000: A Fresh Look

The solution Raman and his team came up with is a “photonic crystal design,” where holes are spaced evenly throughout the fabric matching the wavelength of the incoming light. The sail should also be constructed using individual swatches of fabric, with the spacing of the swatches matching the emission of the thermal wavelength. By combining these two design elements, the authors believe their sail will radiate enough heat into space to avoid melting and disintegration.

DESIGN GROUNDED IN REAL MATERIALS AVAILABLE IN THE LAB TODAY

As for the next steps, Deep Jariwala, an Assistant Professor in the Department of Electrical and Systems Engineering, and another team member said, “Our plan for the future would be to make such structures at small scales and test them with high-power lasers.”

Of course, any practical application of the Breakthrough Starshot teams’ sail design is still likely decades away. But given the recent discoveries of planets around Proxima Centauri, our closest stellar neighbor, including hints of an exoplanet in that star’s habitable zone (where liquid water could theoretically exist on its surface), it is probably time to start planning for such a mission.

“A few years ago, even thinking or doing theoretical work on this type of concept was considered far-fetched,” concluded Jariwala. “Now, we not only have a design, but the design is grounded in real materials available in our labs.”