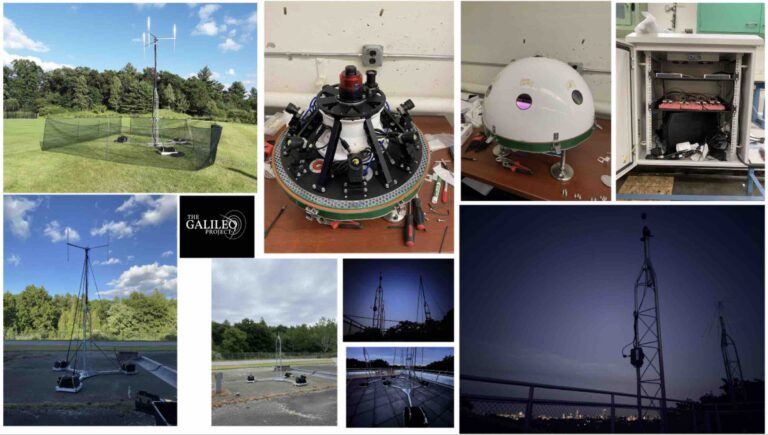 Looking to the Skies, Astronomers Assemble the New Eyes and Brain of the Galileo Project

Over the past few weeks, team members of the Galileo Project engaged in a truly heroic effort to assemble the first telescope system at Harvard University.

The Galileo Project is a scientific search program for extraterrestrial equipment near Earth. The Project was publicly announced one month after the ODNI report to the US Congress about Unidentified Aerial Phenomena (UAP) in June 2021. The Project’s name was inspired by Galileo Galilei’s legacy of finding answers to fundamental questions, in this case the nature of UAP, by looking through new telescopes.

The search is agnostic regarding its potential outcome. It represents a fishing expedition that could result in a mixed bag, containing primarily (after the elimination of instrumental artifacts):

Assembling high-quality data on the first category would be of interest to zoologists or atmospheric scientists. The second category could be of interest to national security agencies in government. But anything else would be of great scientific interest to the Galileo Project. This third category includes objects that appear to be of artificial origin, for example – showing screws or bolts in high-resolution images of their surface, but moving or interacting in ways that cannot be reproduced by current human-made devices.

The Galileo Project is a new research initiative. Its novel cameras will monitor the entire sky in the optical, infrared and radio bands, as well as in audio, magnetic field and energetic particle signals. The data will be analyzed by artificial intelligence (AI) algorithms that will aim to catalog objects within the above-mentioned categories.

As Arthur Conan Doyle’s fictional detective Sherlock Holmes noted: “When you have eliminated all which is impossible, then whatever remains, however improbable, must be the truth.”

The Galileo Project is a new research initiative. Existing astronomical observatories target objects at great distances and have a limited field of view of the sky, whereas the Galileo Project aims to monitor the entire sky continuously and study fast-moving objects in the vicinity of the Earth. It is an astronomy project since it analyzes data obtained by telescopes and searches for interstellar objects that originate outside the Solar system. Its novel observing strategy employs state-of-the-art cameras and computers.

Government agencies aim to protect the safety of military personnel and national security interests. From their perspective, UAP reports by military staff members, such as those discussed during congressional hearings, are of primary importance for the first task, and data from military patrol sites are linked to the second objective. Government agencies must know what the vast majority of UAP are, and for that purpose they must attend to data of compromised quality including blurry videos.

However, the goal of scientists is complementary to that. They do not need to explain most of the reports. Even if only one object is of extraterrestrial technological origin among the clutter of natural or human-made objects, it would represent the most consequential discovery in human history. To figure this out, scientists must have access to the highest quality data, such as a high-resolution image of an object showing a label “Made on Exo-Planet X”, or a maneuver at a fraction of the speed of light or a set of buttons on a futuristic gadget.

Moreover, scientists are concerned with all possible geographical locations even if they do not host military or national assets. Extraterrestrial equipment might not adhere to national borders in much the same way that a biker navigating down the sidewalk does not care which of the pavement cracks is occupied by a specific colony of ants.

The innovative new telescope system of the Galileo Project represents a brand-new observatory design with unprecedented capabilities. As its “Lego pieces” were put together seamlessly over the past few weeks, my heart filled with respect and appreciation for the professional quality of the Galileo team members. In the years to come, we will harvest new knowledge from copies of the first observatory template they constructed.

These telescopes are the new eyes and the computer system attached to them is the new brain of the Galileo Project. Watching the sky through new observatories is our best way to find out whether we have neighbors.  What we do with the answer depends on the details it entails.