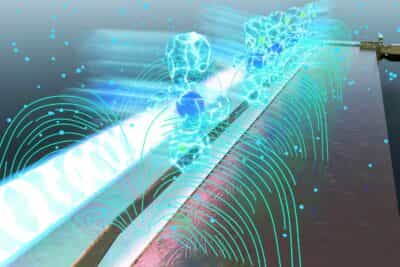 Scientists with the U.S. Army Research Laboratory say they recently made a significant breakthrough in quantum electronic warfare.

Using laser beams to create highly-excited Rydberg atoms, Army researchers say they built a quantum sensor to detect the complete radio spectrum. The findings published in the Physical Review Applied show the Rydberg sensor can pick up Bluetooth, Wi-Fi, AM and FM radio, and other communication signals on frequencies up to 20GHz.

In a statement, Dr. Kevin Cox, a researcher at the U.S. Army Combat Capabilities Development Command, said, “All previous demonstrations of Rydberg atomic sensors have only been able to sense small and specific regions of the RF spectrum, but our sensor now operates continuously over a wide frequency range for the first time.”

Background: What is Quantum Technology

Classical physics deals with everyday conditions and the interactions between objects, motion, energy, and force at the macroscopic scale. Comparatively, quantum science examines the confusing and often strange physics world at atomic and subatomic levels. The term “modern physics” is often used to describe the current scientific paradigm that accounts for classical mechanics, special and general relativity, quantum mechanics, and quantum field theory.

The fundamental principle of quantum mechanics is quantum superposition or the phenomena in which objects at the atomic level can take on two (or more) distinct states simultaneously. To put it simply: classical computing is a binary system where information is stored in bits, represented logically by either a 0 (off) or a 1 (on). Conversely, by using the principle of superposition, quantum computing uses “qubits,” which can be both on and off at the same time.

Since the late 1990s, quantum technology has become a burgeoning field in science and engineering. Not long ago, The Debrief reported on a team of leading scientists who achieved the first-ever successful demonstration of sustained, long-range, high-fidelity quantum teleportation. The accomplishment is one of many examples of nascent technologies making use of the Byzantine disciplines of quantum entanglement, quantum superposition, and quantum tunneling.

States of quantum superposition can be highly susceptible to many external effects such as electronic, magnetic, and gravitational waves. As quantum science continues to advance, there’s been a significant push to develop quantum sensing devices, which will have numerous commercial applications. Once fully developed, these quantum sensors will become cheaper, easier to use, more portable, and extremely accurate.

According to Army researchers, the novel quantum electronic warfare device they designed has two main parts: lasers and a small glass cell containing atoms above a microwave circuit.

Using the lasers, rubidium atoms are excited into desired Rydberg states, allowing researchers to measure atoms’ response to an electric field and hone in on a portion of the spectrum they wanted to measure. Because Rydberg atoms are extremely sensitive to the circuit’s electric fields, the device can expose the wide-range of faint signals in the RF spectrum.

Ultimately, researchers say a fully developed Rydberg sensor will lead to a powerful new form of quantum electronic warfare, whereby instruments for the first time would be able to detect the entire radio spectrum.

“Quantum sensors in general, including the one demonstrated here, offer unparalleled sensitivity and accuracy to detect a wide range of mission-critical signals,” said Army researcher and co-author on the Rydberg sensor study, Dr. David Meyer.

In a report published in the scientific journal Nature in 2019, Google claimed their supercomputer, “Sycamore,” had achieved “quantum supremacy” by proving itself to be the world’s first quantum computer. Technology giant, IBM, pushed back on Google’s claim, saying the term “quantum supremacy” describes the point where a quantum computer can do things that classical computers can’t. Using their Summit supercomputer, IBM said they could perform the same tasks as Sycamore in roughly 2.5 days.

In December 2020, a Chinese team of researchers staked the claim they had built the world’s first dedicated quantum computer and achieved quantum supremacy. Similarly, not everyone in the quantum computer science community is convinced, and some dispute China’s claim.

One thing that is all but certain, military quantum technology will be a game-changer and completely alter the defense world overnight. Quantum communication and cryptography systems would be inherently secure and uncrackable. Equally, quantum radar could easily see through stealth, while quantum metrology would offer unjammable navigation platforms.

Army Research Lab’s Rydberg spectrum analyzer has the potential to surpass all current limitations in sensitivity, bandwidth, and frequency range, to achieve real quantum electronic warfare. The breakthrough would unlock an entirely new frontier in military sensors for spectrum awareness and communications. However, researchers acknowledge a lot of work still needs to be done before the U.S. Army can claim quantum electronic warfare supremacy.

“Significant physics and engineering effort is still necessary before the Rydberg analyzer can integrate into a field-testable device,” said Dr. Cox. “One of the first steps will be understanding how to retain and improve the device’s performance as the sensor size is decreased.”

In the future, researchers say they plan on improving the Rydberg spectrum analyzer’s signal sensitivity and reducing the device’s power consumption and size.

“Devices that are based on quantum constituents are one of the Army’s top priorities to enable technical surprise in the competitive future battlespace,” said Army researcher Dr. David Meyer. “This is a really important step toward proving that quantum sensors can provide a new, and dominant, set of capabilities for our Soldiers, who are operating in an increasingly complex electro-magnetic battlespace,” added Dr. Cox.