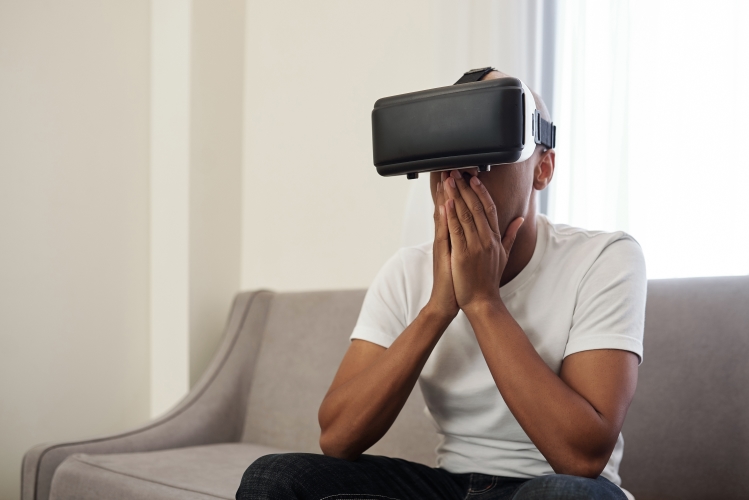 Is the idea of openly speaking in front of a therapist too intimidating for you? New research says that you’re not alone in this… and that many people feel more comfortable speaking to an avatar than being in person with a therapist.

In a recent study by Edith Cowan University (ECU), researchers found that 30 percent of people much rather talk about their negative experiences with a virtual reality character, instead of a real person.

Over the years, virtual reality (VR) tech has grown tremendously and become more popular recently due to the Covid-19 pandemic and the rise of the metaverse. The VR industry is adapting and nowadays, more than being a computer-mediated mode of social interaction, this technology is being used in several other sectors.

The automotive industry, retail, learning and personal development, recruitment, law enforcement and military, and healthcare are only a few of the industries that have experienced and adopted VR as an essential tool.

In a blog post titled “Virtual reality gave me my brain back“, celebrity “shark” Mark Cuban explains how he suddenly became afflicted with a vestibular disorder, suffering dizziness and brain fog, and how VR-mediated therapy helped him overcome it. The Dizziland therapy worked so well that Mark now only needs it every couple of weeks for maintenance. Since then, Mark Cuban has become a high investor in VR tech.

VR has also been used as a treatment for mental health issues for a while now. This tech has been used as an alternative to treating Post-Traumatic Stress Disorders (PTSD) since the 1990s with programs like the Bravemind VR Package that was designed to treat US soldiers with PTSD after serving in Afghanistan. Other applications for VR tech in aiding with mental health issues include packages for treating alcohol addiction, claustrophobia, teenage depression (Limbix), eating disorders (Psious), and more.

Today’s VR mental care packages are more geared towards exposure therapy. This type of treatment for anxiety disorders is based on exposing patients to stimuli that induce anxiety in a controlled environment, in order for them to learn that what they perceive as “threatening” is not necessarily that dangerous.

People who are afraid of heights can be exposed to continuously higher buildings, someone with PTSD might revisit traumatic situations during the therapy session, while still being completely safe inside a VR headset. Compared with having to create controlled, real-life scenarios, this type of therapy can be much safer, quicker, and cheaper.

But what about the classic one-on-one therapy sessions? Would anyone benefit from having them replaced by VR tech?

Analysis: VR-mediated therapy could be better than one-on-one sessions

They tried to create a realistic motion avatar that closely mimicked the therapist’s body, hands, and face movements, as well as their overall look, using full face and body motion capture technology. Each participant experienced an in-person conversation with a real-life therapist and a VR-mediated conversation with the avatar. In both settings, patients had to talk about positive and negative personal experiences.

In the end, the participants were asked to rate their experience on specific points like enjoyment, perceived understanding, comfort, awkwardness, and others. The leader of this study, psychology and communication researcher, Dr. Shane Rogers reported that “overall people rated VR social interaction as similar to face-to-face interaction, with the exception of closeness, where people tended to feel a little closer with each other when face-to-face.”

30 percent of the participants, however, felt more comfortable in disclosing negative experiences to the avatar. When questioned about the reason why some people would prefer a virtual therapist over a real one, Dr. Rogers told The Debrief:

“It is most likely linked to the sense of interpersonal distance. In VR, you are speaking to an avatar, and even though that avatar is another in-real-life person you are communicating with, there seems to be an added element of interpersonal distance experienced when they are an avatar compared to if they are with you face-to-face in the real world. This can make some people feel more comfortable. There might also be an element of experienced distance from one’s own thoughts, as you are transported to a different world, which might also make a person feel more comfortable disclosing negative thoughts and feelings. This latter idea needs further research.”

Outlook: therapy for everyone

The development of VR tech and the sophistication of motion capture systems lead Dr. Rogers to believe that VR will be catapulted into our everyday lives and VR-mediated interactions will become common in casual conversations, business, tourism, education, and therapy, over the next five years.

“More powerful computers are becoming more affordable, VR headsets and peripherals are continuing to develop, and more user-friendly VR interaction software platforms are becoming available and being updated,” he said.

Dr. Rogers also thinks that VR-mediated therapy will one day be affordable and easily available to the general population. “A lot of money is currently being invested into the ongoing development of VR. I believe we will start seeing VR systems that include full face and body motion capture integrated into the system to become more affordable in the not-too-distant future. This will create opportunities for therapy clinics to offer therapy in VR as part of their service delivery,” he told The Debrief.

The next steps in this research would involve investigating how the fidelity of the avatar impacts the experience of users and a few other important aspects. “We need further development of the hardware and software required, and we also need to conduct further study into how to best set up the virtual therapy setting. What should the graphics parameters be? How should the avatars look? How should the environment look?” Rogers told The Debrief.

The integral paper called “Realistic motion avatars are the future for social interaction in virtual reality” is publicly available in the Frontiers in Virtual Reality journal.