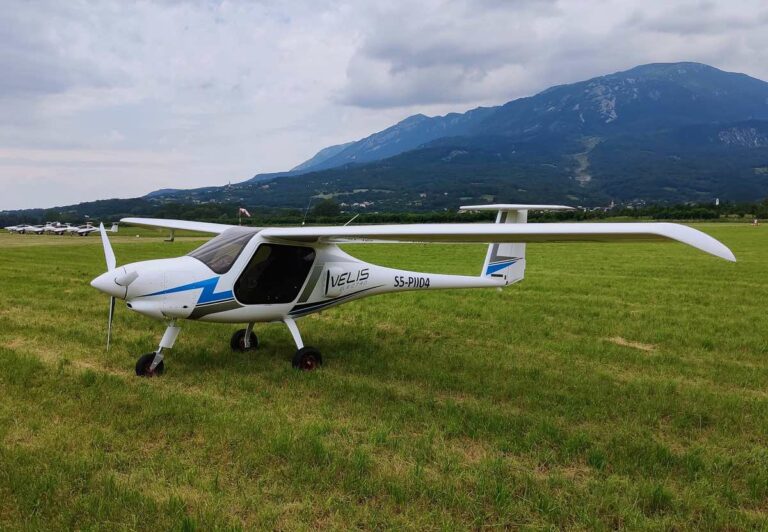 In the skies above England, a military aircraft with a different propulsion system to the turbofan and turboprop engines fitted to present-generation Royal Air Force (RAF) types is currently being evaluated. If successful, these trials may end up heralding a completely new method of powering Britain’s basic military pilot training machines, and the newest type of powerplant used in operational RAF service since the arrival of the Gloster Meteor jet fighter in July 1944.

The aircraft in question is the Slovenian-built Pipistrel Velis Electro, the first and currently only type-certified electric aircraft in the world. Powered by a liquid-cooled Pipistrel E-811 electric motor which is capable of generating 57.6 KW (the equivalent of 77 hp) at 2,500 rpm for take-off and then 49.2 KW (66 hp) at 2,350 rpm for continuous flight operations, the aircraft is deemed capable of safely covering about 100 miles before the power runs dangerously low. Recharging from 30% to 100% takes anywhere between two to three hours.

A high-winged two-seater with side-by-side seat configuration, the Velis Electro has already entered evaluation with both the Slovenian and Danish Air Forces as a basic pilot training aircraft, the former eventually with five and the latter leasing two from Pipistrel for the purpose.

The commander of the Slovenian 15th Military Aviation Regiment, Colonel Janez Gaube, explained that the aircraft use new standards and environmentally-friendly technology.

“Certainly, aviation is one of the major polluters,” said Defense Minister Matej Tonin, who confirmed the benefits of using electrically-powered military aircraft. “I am very pleased that the Slovenian Air Force will be the first in the world to use electric planes to train military pilots.”

The Danes began to trial the Velis Electro in September 2020 at Karup and plan to integrate the pair of electric-powered aircraft into their pilot training program after the initial two-year-long trial ends, the electric machines working alongside the existing SAAB T-17 piston-engined trainers.

“Everyone has a responsibility to contribute to climate change prevention,” said Danish Minister of Defense Trine Bramsen, who also confirmed her country’s use of electric-powered military aircraft.

“This also applies to the area of defense,” Bramsen says. “Therefore, we have decided to procure electric aircraft for our air military.”

It is not clear whether the Pipistrel aircraft can cover the entire range of pilot training tasks currently performed by the Danish air force. However, Lieutenant Colonel Casper Børge Nielsen of the Danish Ministry of Defense’s Material & Procurement Agency stated that the goal was to gain experience in electric flight so that the country would be ready to use the new technology as it evolves during subsequent years.

The RAF is the third air force to look at the type for its ab initio training requirements. A team from the Air & Space Warfare Centre at RAF Waddington in Lincolnshire is currently analyzing the results of flight trials being performed by a civilian pilot from a private airfield in Essex. 50 aircraft have already been made available for rental by UK civilian flying schools through an initiative known as Green Airside, a collaboration between Pipistrel’s UK distributor and an investment fund. The type received its certification for daylight, visual flight rules operation by the EU Aviation Safety Agency (EASA) in 2019 and the UK’s Civil Aviation Authority in February 2021, the first electric-powered aircraft to achieve this.

Senior RAF officials are keen to see the introduction of electric aircraft, not only due to environmental reasons but also because engine heat emissions are non-existent. They do not generate exhaust heat as a turbofan or turboprop powerplant would so would be less vulnerable to infra-red homing (“heat-seeking”) air defense missiles.

Whilst the RAF has kept something of a low profile in terms of its involvement with electric aircraft in recent years, Air Chief Marshal Sir Mike Wigston confirmed the force’s interest in such machines at a meeting held in July 2021.

“I am determined we will have our first zero-emission aircraft operational by the end of this decade”, Wigston stated.

The aircraft is also said to be 70% quieter than conventionally-powered types, which it is hoped will reduce the number of noise complaints by residents living close to RAF basic pilot training bases. In addition, the engines used in such electric-powered aircraft also require less maintenance, and recharging their batteries costs just a tenth of the fuel which would be required for conventional powerplants.

It is not envisaged that electric power will replace jet engines fitted to high-performance interceptor types anytime soon since the former cannot yet generate the power and speed necessary for modern combat duties. Currently, the world airspeed record set by an aircraft fitted with an electric engine is just 212 mph, although the technology apparently exists to build batteries capable of powering one up to at least 300 mph. Such incremental increases in capability will one day allow fighter aircraft to be powered by electric motors that can trace their lineage back to the E-811 installed in the Pipistrel Velis Electro.