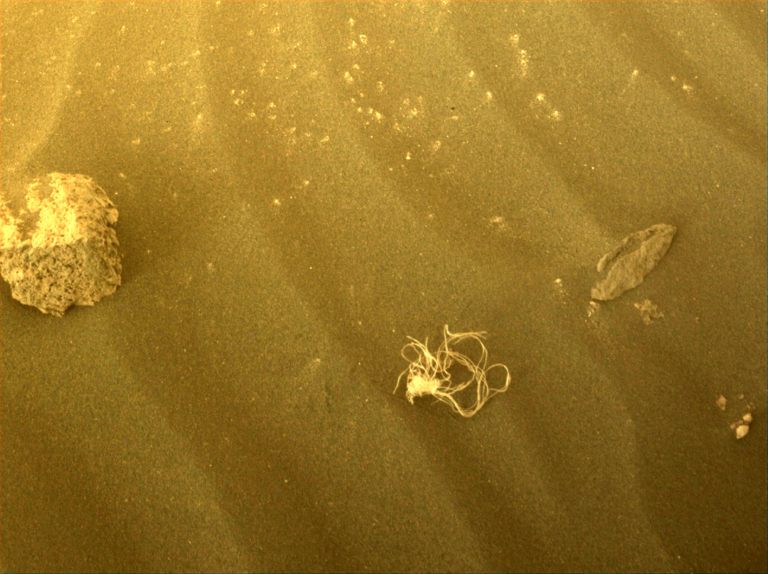 A piece of string-like material photographed on Mars by the Perseverance Rover just last week has suddenly disappeared, according to recent NASA photos obtained by its rover on the Red Planet.

The wiry-looking substance many likened to a piece of string or thin pasta first appeared in photographs taken by the rover on July 12th, photos that were shared by NASA earlier this week. However, a photo taken four days later shows the string has somehow disappeared.

Since landing on the red planet, humanity’s various rovers have made a habit of taking odd, unusual, often perplexing photos. In some cases, like the “flower” or recently discussed “door” on Mars, the photos ultimately proved to be natural formations instead of foreign objects.

Of course, Martian rovers bring their own junk with them. And many of the more infamous photos sent back from those rovers are of their own pieces of human-made debris.

NASA’s experts told the media the recent photograph is likely something artificial and not a natural formation masquerading as a manufactured object. However, rather than a remnant of a kite flown by E.T. on his Martian holiday, the same experts say this string was also probably a piece of material from the rover’s landing rocket.

“The string could be from the rover or its descent stage, a component similar to a rocket-powered jet pack used to lower the rover to the planet’s surface safely,” a Perseverance mission spokesperson at NASA’s Jet Propulsion Laboratory told CNN.

The same spokesperson concedes that the string was photographed in an area not previously visited by Perseverance but guessed that the string likely blew there on its own.

Either that. Or it has a completely different origin.

Adding more mystery to the mystery, when the rover passed over the same spot on July 16th, the string had magically disappeared. Once again, most suggest that the string left the same way it arrived, on a gust of wind.

Still, given the incredibly thin Martian atmosphere and the great lengths designers had to go through just to get the Ingenuity helicopter to grasp that atmosphere and take flight, it would take some mighty gusts of wind to send that string into and out of the same spot within a four day period. So, for now, at least, the mystery of the Martian string remains.