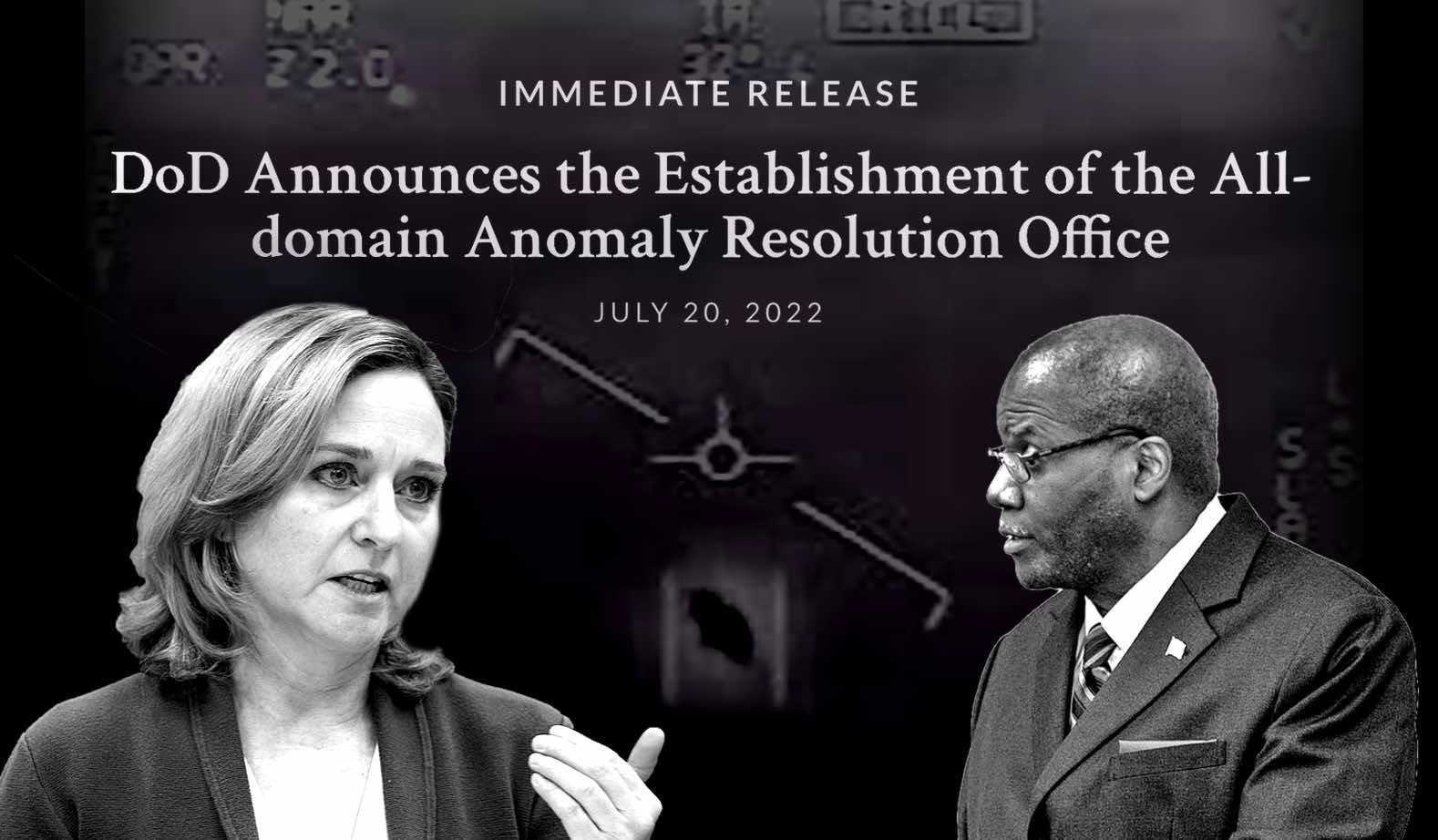 On Wednesday, the Department of Defense announced the establishment of the All-domain Anomaly Resolution Office, the latest iteration of the Pentagon’s official efforts to collect and analyze reports of military encounters with unidentified aerial phenomena (UAP).

The Pentagon’s announcement updates a previous statement issued last November, in which the DoD revealed that its official UAP investigative component would be called the Airborne Object Identification and Management Group (AOIMSG), set to become the successor to the Unidentified Aerial Phenomena Task Force (UAPTF) that has officially been in operation since 2020.

“On July 15, 2022, Deputy Secretary of Defense Kathleen Hicks, in coordination with the Director of National Intelligence (DNI), amended her original direction to the Under Secretary of Defense for Intelligence & Security by renaming and expanding the scope of the Airborne Object Identification and Management Group (AOIMSG) to the All-domain Anomaly Resolution Office (AARO),” read a Pentagon release.

“The AARO will serve as the authoritative office of the Unidentified Aerial Phenomena (UAP) and UAP-related activities for the DoD,” Hicks wrote in a memorandum on July 15, 2022.

“Any DoD Component acting on behalf of the UAPTF, or who has data, analysis, contracts, or other material related to UAP, will immediately synchronize their efforts with the AARO,” Hicks added.

Citing the enactment of the National Defense Authorization Act (NDAA) for fiscal 2022, “which included a provision to establish an office, in coordination with DNI, with responsibilities that were broader than those originally assigned to the AOIMSG,” the newly rechristened AARO will incorporate functions outlined in a widely-discussed amendment to the FY2022 NDAA presented by U.S. Senators Kirsten Gillibrand (D-NY) and Marco Rubio (R-FL), along with similar legislation introduced by Representative Ruben Gallego (D-AZ) in the House version of the bill.

The DoD’s establishment of the AOIMSG last year roughly coincided with the initial draft of the amendment put forward by Senator Gillibrand, which included “Anomaly Surveillance and Resolution Office” or ASRO, as a proposed title for the DoD’s UAP office, causing confusion and speculation about the possible existence of more than one UAP investigative element within the DoD.

In May, Pentagon spokesperson Susan Gough told The Debrief that only one office would exist, then still called the AOIMSG, and that the Pentagon was “currently coordinating implementing guidance for the AOIMSG across the department and with interagency partners to ensure that the AOIMSG meets congressional intent.”

Gough also emphasized that the relevant text within Sec. 1683 of the FY2022 NDAA included no name for the office in the final legislation that went into law, allowing the DoD’s existing effort to be tailored to meet the requirements outlined in the bill.

According to Wednesday’s Pentagon release, “USD(I&S) Hon. Ronald S. Moultrie informed the department of the establishment of AARO within the Office of the Under Secretary of Defense for Intelligence and Security, and named Dr. Sean M. Kirkpatrick, most recently the chief scientist at the Defense Intelligence Agency’s Missile and Space Intelligence Center, as the director of AARO.”

In May, independent researcher Douglas Dean Johnson was first to reveal that Kirkpatrick would lead the Pentagon’s forthcoming UAP investigations, citing “Multiple Executive Branch branch sources” who spoke on background with knowledge that Kirkpatrick applied for the position and was selected, but that no formal announcement had been made at that time.

“The mission of the AARO will be to synchronize efforts across the Department of Defense, and with other U.S. federal departments and agencies, to detect, identify and attribute objects of interest in, on or near military installations, operating areas, training areas, special use airspace and other areas of interest, and, as necessary, to mitigate any associated threats to safety of operations and national security,” read a portion of Wednesday’s Pentagon release. “This includes anomalous, unidentified space, airborne, submerged and transmedium objects.”

Wednesday’s release also confirmed that Under Secretary of Defense for Intelligence & Security (USD(I&S)) Ronald Moultrie, who participated in recent Congressional hearings on the subject of UAP, will lead the AARO Executive Council (AAROEXEC), which will lend oversight and provide direction to the new AARO regarding several elements, which include:

The DoD’s announcement arrived coinciding with language introduced by the House Permanent Select Committee on Intelligence on Wednesday (H.R. 8367) for its version of the FY2023 Intelligence Authorization Act, which included provisions for the historical study of unidentified aerial phenomena, and called for disclosures related to the recovery of any material related to such phenomena.

According to the bill’s language, “for the period beginning on January 1947, and ending on the date on which the Comptroller General completes activities under this subsection, compile and itemize a complete historical record of the intelligence community’s involvement with unidentified aerospace-undersea phenomena,” a portion reads, making obvious reference to events popularly associated with the alleged crash and subsequent recovery of an exotic aerial vehicle in New Mexico in the summer of 1947.

H.R. 8367 also calls for “including successful or unsuccessful efforts to identify and track unidentified aerospace-undersea phenomena, efforts to recover or transfer related technologies to United States-based industry or National Laboratories, and any intelligence community efforts to obfuscate, manipulate public opinion, hide, or otherwise provide unclassified or classified misinformation about unidentified aerospace-undersea phenomena or related activities,” among other provisions related to the intelligence community’s collection of information about UAP.

The UAP-related provision within the bill was spearheaded by Rep. Mike Gallagher (R-WI), who serves as a member of the House Permanent Select Committee on Intelligence.

“In an increasingly dangerous world, the Intelligence Community (IC) plays a vital role in making sure the country’s leaders have the best information possible to protect the U.S. and its interests,” Gallagher said in a statement on his website.

“This Intelligence Authorization Act not only takes steps to ensure that these men and women have the resources they need to continue their mission, but also takes steps to promote transparency and increase Congressional oversight of the IC in a way that still safeguards sensitive information.”

In a memorandum issued on Wednesday, Moultrie similarly emphasized the significance of the AARO and the collection of data on unidentified aircraft and other phenomena in the furtherance of the DoD’s national security interests.

“It is vital to our national security and the safety of our military personnel that we maintain awareness of anomalous objects in all domains,” Moultrie wrote in a memorandum on Wednesday.

“The establishment of the AARO is a significant step forward in developing the capabilities and processes that are necessary to achieve these goals.”