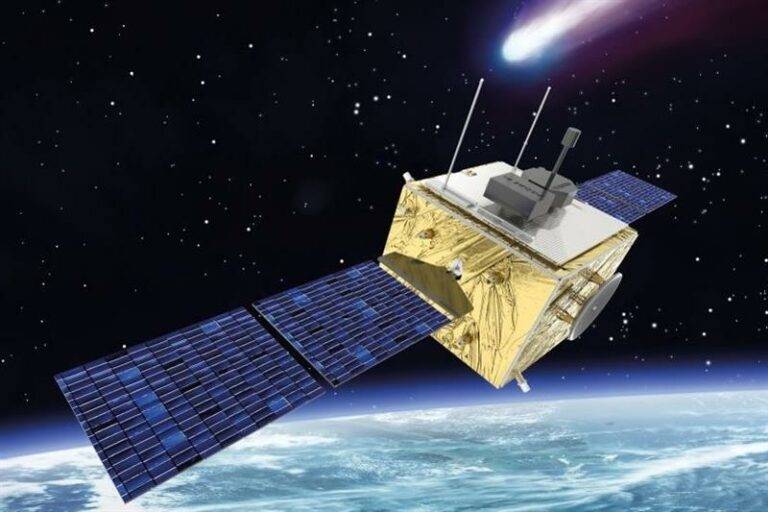 
Part of the European Space Agency’s Comet Intercept mission, the proposed vehicle would lurk in an orbital “dead zone” for years before selecting its target.

Imagine a spacecraft designed to travel to a “dead zone” in space, wait there for years, and then—once a target is in sight—swoop in and deploy probes to surround, analyze, and map that target. Sound like science fiction? Well, an international team led by academics from University College London and the University of Edinburgh devised a plan last year to do exactly that.

And this month, after selecting the Comet Intercept mission from a range of proposals, the European Space Agency (ESA) has chosen French-Italian aerospace contractor Thales Alenia Space to take the first steps toward making this impressive mission a reality. As stated in the company’s announcement:

“Thales Alenia Space in the UK will be responsible for the spacecraft design as well as the preparation for the development phase that encompass the Assembly Integration and Test of the space segment, the support for launch operations and commissioning in orbit.”

Scheduled for launch in 2028, the mission is building on the success of previous man-made space vehicles at rendezvousing with—and even landing on—small objects traveling through space.

As early as 1989, after cruising by Jupiter, NASA’s Galileo mission achieved the first successful flyby of asteroid 951 Gaspra. In 2001, NASA’s NEAR Shoemaker spacecraft actually landed on an asteroid called Eros; four years later, Japan’s Space agency, or JAXA, raised the bar when their Hayabusa mission to asteroid Itokawa became the first to land, collect a sample, and return it to Earth.

JAXA made headlines again this month with their second asteroid material retrieval mission, Hayabusa2, which successfully landed on its target Ryugu, retrieved a sample, and returned to Earth, carrying what scientists are calling “more asteroid specimens than expected.”

Of course, as impressive as these missions to asteroids are, tangling with a comet is a different story altogether. Doing so with a long-period comet, the type the Comet Intercept mission is targeting, is downright unprecedented.

Comets we’ve observed so far in our solar system are known as short-period comets based on their relatively quick trips around the sun—on the order of a few hundred years. The ESA describes them as “objects that have approached the Sun many times, and have thus undergone changes on their surfaces, hiding their original appearance and make-up.”

The type of target being sought by the Comet Intercept mission is, on the other hand, a “true, pristine comet,” one that “has yet to be encountered and explored. Such objects are difficult to target because they can only be discovered when approaching the Sun for the first time, leaving little time to plan and launch a mission to them.”

Unless you’re already waiting nearby, that is. With the Comet Intercept, this problem should be solved.

Building on Thales Alenia Space’s achievement with the Rosetta/Philae mission in 2004, the first to successfully perform a landing on a short-period comet—along with the success of NASA’s Deep Impact mission a year later, which smashed a probe into comet Tempel 1 to observe and record the ejecta for analysis—ESA is now partnering again with the company to take the critical first steps toward approaching and analyzing an ancient long-period comet in 3-D detail.

As explained by the ESA:

“The mission will travel to an as-yet undiscovered comet, making a flyby of the chosen target when it is on the approach to Earth’s orbit. Its three spacecraft will perform simultaneous observations from multiple points around the comet, creating a 3D profile of a ‘dynamically new’ object that contains unprocessed material surviving from the dawn of the Solar System.”

But how will the ESA and its technical team accomplish this goal?

Proposed for a 2028 launch, the mission consists of the main spacecraft, to be provided and operated by the ESA,. and two probes designed to surround, analyze, and map the comet’s surface. One probe will be manufactured and operated by ESA, while the second probe is from JAXA.

Once in space, the craft will loiter in an area of space known as Lagrange point 2, or L2, until its target is spotted.

Named for Italian mathematician and astronomer Joseph Louis-Lagrange, who first discovered these zones, L2 is one of a number of points in our solar system where the opposing forces of gravity create what some astronomers call a “dead zone,” allowing objects to more or less retain their location over extended periods of time. By waiting at L2, a point directly on the other side of the Earth from the sun, the craft can lie dormant, possibly for years, before finally taking the opportunity to strike.

The reason for this approach is simple: Astronomers and mission planners don’t exactly know which interstellar body the mission will target until it enters our solar system.

With the Comet Intercept spacecraft already lying in wait at L2, the mission team will only need to wait for just such a comet to enter our solar system and then command the craft to pounce. This complex set of maneuvers, including the crucial final step, are outlined in more detail by Thales Alenia Space:

“The mission will launch in 2028 and wait in orbit for a suitable target; the composite spacecraft will travel together before the three modules separate a few days prior to intercepting the comet. Each module will be equipped with science instruments, providing different perspectives of the comet’s nucleus and its gas, dust, and plasma environment. Such ‘multi-point’ measurements will greatly improve the 3D information needed to understand the dynamic nature of a pristine comet while it is interacting with the constantly changing solar wind environment.”

Ever since NASA’s ISEE-3 mission flew by comet Giacobini-Zinner in 1985, followed by a flyby of Halley’s Comet in 1986, man-made probes have become increasingly more adept at stalking, intercepting, and now even landing on their targets. It is, of course, still years before the Comet Intercept craft is launched. But if the success of the ESA and Thales Alenia Space on the famous Rosetta/Philae mission is any indicator (not to mention Hayabusa2’s recent return of asteroid samples), then sometime near the end of this decade a first-of-its-kind craft will awake from its deep sleep, close in on its interstellar target, and once again make history.