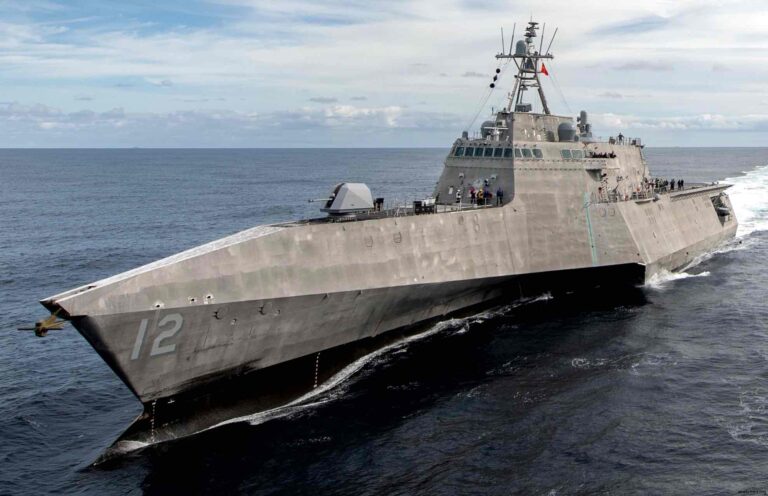 The USS Omaha at sea (US Navy/Public Domain).

The Pentagon has confirmed that newly leaked footage, appearing to show an unidentified aerial object that was filmed as it entered the ocean, was obtained by US Navy personnel and is being examined by the Navy’s UAP Task Force.

The video was obtained by personnel aboard the USS Omaha, a United States Navy Independence-class littoral combat ship, during a 2019 incident that occurred off the California coast.

The footage was posted online on Friday, May 14 by documentary filmmaker Jeremy Corbell on his Instagram account. Corbell previously released footage at his website in recent weeks depicting a series of pyramid-shaped objects filmed by Navy personnel which the Pentagon subsequently confirmed to be authentic. According to Corbell, the newly released video was filmed from within the Combat Information Center (CIC) of the USS Omaha on July 15, 2019, at approximately 11 PM EST.

The Debrief reached out to the Pentagon about the newly leaked video asking whether it could be confirmed as authentic, and whether it was obtained by Navy personnel aboard the USS Omaha.

“I can confirm that the video was taken by Navy personnel, and that the UAPTF included it in their ongoing examinations,” said Pentagon spokesperson Susan Gough in an email response.

The Debrief also inquired as to whether the video was included in reports by the Navy’s UAP Task Force, and whether the object in the video has been classed as “unknown” and possibly representing unidentified aerial phenomena (UAP). However, Gough declined to provide further comments in response to our questions.

On May 7, 2019, USS Omaha (LCS-12) departed from its San Diego homeport for sea trials after serving a 10-month Post Shakedown Availability (PSA), according to records documenting the vessel’s recent history. The following month on June 20, the Omaha (Crew 212), with Cmdr. David W. Walton Jr. in command, made a short stop to unload ammunition at Bravo Pier, and was subsequently moored at Naval Base San Diego again before returning to sea for the majority of the month of July. The warship returned home again on August 1.

During these exercises in the summer of 2019, USS Omaha was one of several Navy vessels that observed unusual aerial objects, while operating in a sensitive training range within 100 miles of the California coast. Following the incidents, inquiries from Naval intelligence officers and investigations by the FBI field office in Los Angeles were conducted. Emails obtained by NBC News further confirmed that inquiries were also made by a special agent with the Naval Criminal Investigative Service, and the director of the Maritime Intelligence Operations Center within the Navy’s 3rd Fleet shortly after the incidents.

According to a transcript of the video published by reporter George Knapp, the dialogue from within the USS Omaha Combat Information Center reads:

In a forthcoming interview with Bill Whitaker for 60 Minutes airing Sunday, Former Navy Lieutenant Ryan Graves said that members of his F/A-18 fighter squadron observed unidentified aerial phenomena in restricted airspace southeast of Virginia Beach almost daily between 2015 and 2017. Graves told Whitaker that he and other Navy pilots had begun to take the presence of the objects for granted on account of their frequent appearances.

Graves told 60 Minutes that he believes the objects are a threat to the security of the United States.

“I am worried, frankly,” Graves said to Whitaker, stating that if tactical aircraft from adversary nations were seen in the same controlled airspace it “would be a massive issue.”

“We’re happy to just ignore the fact that these are out there,” Graves said on account of the fact that the unidentified objects he and other members of his squadron observed don’t resemble any known threatening adversarial technologies.

In recent weeks, the Pentagon also confirmed that a number of photos and videos leaked online, purportedly showing unidentified aerial phenomena, had similarly been obtained by Navy personnel. The images, which appear to have been taken around the same time as a photo originally reported by The Debrief last year, were shared by investigative journalist George Knapp at his website MysteryWire.com.

Nearly coinciding with Knapp’s reporting had been a video posted at ExtraordinaryBeliefs.com by Corbell, which appeared to depict a series of pyramid-shaped drones or other objects said to have been filmed while flying above the USS Russell. The incident detailed in the footage occurred in July 2019, while the Navy warship had been off the coast of San Diego.

The leaked video Corbell posted was also accompanied by a series of photographs, identified as having been taken from the USS Omaha, which appear to document the same incident that the newly-leaked footage conveys.

“USS Omaha observed a possible UAS (Unmanned Aerial System), spherical in shape moving towards the surface of the water and then disappearing,” read a comment from Carrier Strike Group 9 (CSG-9) that accompanied the initial series of photographs released by Corbell.

“OMA assessed the object had sunk,” the comment stated, adding that “Attempts to search the water for wreckage were ineffective.”

The orb-like object in the new video and previously released photographs appears to descend into the water after it was initially spotted moving through the sky. According to Corbell, sources familiar with the incident said that during the ensuing search, a US Navy submarine attempted to locate the object after it was seen entering the ocean, but was unsuccessful.

One day after Corbell posted the video and images online, a spokesperson for the Pentagon confirmed that they were authentic materials obtained by the US Navy.

“I can confirm that the referenced photos and videos were taken by Navy personnel,” said Pentagon spokesperson Susan Gough in a statement provided to John Greenewald at The Black Vault in April.

“The UAPTF has included these incidents in their ongoing examinations,” Gough said. “As we have said before, to maintain operations security and to avoid disclosing information that may be useful to potential adversaries, DOD does not discuss publicly the details of either the observations or the examinations of reported incursions into our training ranges or designated airspace, including those incursions initially designated as UAP.”

Last December, The Debrief reported the opinion of officials we had spoken with that indicated the current efforts of the Navy’s UAP Task Force have partially focused on objects termed as unidentified aerial phenomena which may be capable of operating within Earth’s oceans. According to a widely circulated report which many officials we spoke to were familiar with, a particular concern of the UAP Task Force involves what are termed “transmedium vehicles” which are capable of hybrid performance that allows operation in either air or within water.

Lue Elizondo: What The Government Knows About UFOs


Ep. 2: Debriefed with Cristina Gomez - Cristina interviews Lue Elizondo, asking the probing questions that are currently on the minds of researchers, journalists, and surprisingly, also members of Congress.

“On occasion, there are detections made of non-cavitational, extremely fast-moving objects within the ocean,” one intelligence official speaking on background told The Debrief. The official declined to comment further on the nature of such detections, which have apparently been obtained during underwater reconnaissance activities.

On April 5, 2021, Chief of Naval Operations Admiral Michael Gilday said that the Navy had not identified the objects observed during the 2019 incidents off the California coast.

“I am aware of those sightings,” Gilday said, “and as it’s been reported, there have been other sightings by aviators in the air and by other ships not only of the United States, but other nations — and of course other elements within the U.S. joint force.”

Last month, Pentagon spokesperson Susan Gough also confirmed to The Debrief via email that the images leaked in April were captured by Navy personnel, and that the Navy’s UAP Task Force has examined them. Gough declined to comment further on the images and video, in response to our questions about whether any of the objects they depict have been identified.

“As we have said before,” Gough said in her April statement to The Debrief, “to maintain operations security and to avoid disclosing information that may be useful to potential adversaries, DOD does not discuss publicly the details of either the observations or the examinations of reported incursions into our training ranges or designated airspace, including those incursions initially designated as UAP.”

“This latest video confirms my previous statements regarding the amount of evidence the government has concerning UAP,” former counterintelligence agent Luis Elizondo told The Debrief over the telephone. “We are just beginning to scratch the surface.”

Elizondo was the director of the Pentagon’s UAP investigation portfolio, the Advanced Aerospace Threat Identification Program (AATIP), between 2012 and 2017.

The deadline for the UAP Task Force’s report to the Senate Intelligence Committee will arrive in late June, although it remains to be seen whether the Task Force will request an extension for its deadline. This, in addition to the question of how much information it will contain may remain unclassified and accessible to the public.

The Debrief will update this story as it develops.

Editor in Chief MJ Banias contributed to this report.

Do you have additional information regarding sightings of UAP by military personnel? Were you on active duty during any related incidents? Send us an email tips@thedebrief.org.