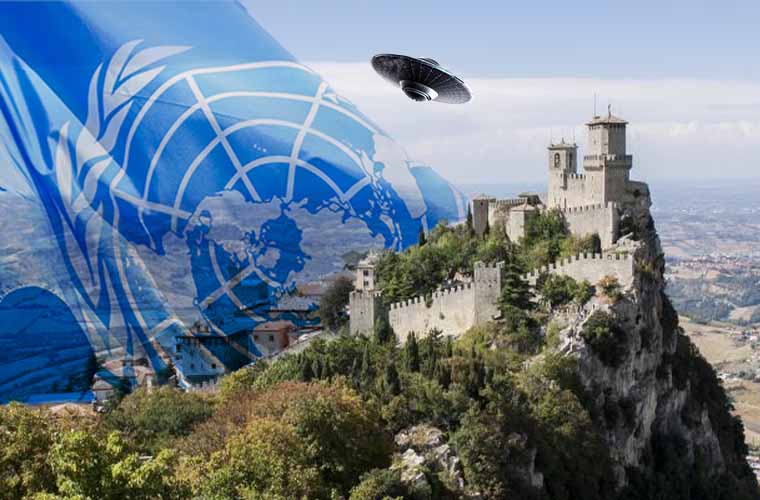 San Marino Could Become the U.N.’s New “Geneva” For UFOs

The subject of “unidentified aerial phenomena” or “UAP,” more commonly known as UFOs, has surprisingly become a topic of serious discussion in the United States.

The Pentagon and Congressional leadership have both taken formal steps not only to acknowledge that encounters with unknown aerial objects are real but that these events deserve legitimate scrutiny by America’s vast national security apparatus. NASA and Harvard University have likewise joined in the fray. Two different prestigious defense and aerospace associations hosted discussions about UAP during their annual conferences recently.

Now, an international consortium wants to try and take the discussion even further by making UAP a topic of global discourse.

Dubbed “Project Titan,” if all goes according to plan, the European enclave of San Marino could become the “Geneva” of UFOs and host nation for a United Nations-backed World Conference dedicated to the study of unidentified aerial phenomena.

“In its contemporary form, the UAP/UFO phenomenon manifests itself for at least 70 years with pretty much the same characteristics all over the world and continues to remain a mystery,” Project Titan manager, Paolo Guizzardi, told The Debrief. “If we really want to advance in the knowledge of the phenomena, an open and collaborative international cooperation is indispensable.”

Last week, representatives from CUN and ICER gave a presentation to officials from the Republic of San Marino, formally requesting as a U.N. member state, San Marino to present the Office of the U.N. Secretary-General with a proposal for the creation of a permanent structure within the United Nations tasked with the organization of a periodic World Conference on UAP.

In presentation documents provided to The Debrief, organizers highlighted four primary reasons it is significantly necessary to have a United Nations-backed initiative on unidentified aerial phenomena.

Likewise, San Marino officials were provided with a rundown of UAP activity by the U.S. government, which has steadily increased since December 2017, when the New York Times revealed elements within the Department of Defense had been secretly studying UAP for nearly a decade.

In fact, as organizers were in San Marino staking their case, The Debrief broke the news that the House Armed Services Committee had submitted legislation to create a permanent UAP Office within the Pentagon. If passed, the UAP Office would replace the DoD’s current temporary UAP Task Force.

Proposers also noted that other nations, such as France and Chile, have been investigating UFO sightings for decades through officially backed government bodies.

Leading the current U.N. initiative, Paolo Guizzardi tells The Debrief that creating a formal way for the international community to take stock of recent UAP research is necessary if there is any hope of ever answering the UFO question.

“The Conference will create a favorable environment for the collegial discussion of items that until now have remained confined within national boundaries, for the sharing and spreading of knowledge until now restricted to national apparatus, and for the presentation and discussion of new ideas in the field,” Guizzardi explained.

Project Titan would not be the first time the subject of UFOs has officially come up at the United Nations.

In the spring of 1978, Prime Minister of the newly independent nation of Grenada, Eric Gairy, proposed creating a U.N.-backed global task force to study the nature and origin of UFOs.

The same panel would later formally submit the proposal before the entire United Nations on November 28, 1978.

Contrary to popular belief, the idea of starting a global UFO investigative group was actually well received by the U.N. General Assembly. So well, in fact, thanks to leaked cables published by Wikileaks, we now know that following the presentation, the U.N. encouraged member states to “take appropriate steps to coordinate on a national level scientific research and investigation into extraterrestrial life, including unidentified flying objects, and to inform the Secretary-General of the observations, research, and evaluation of such activities.”

Discussion on creating an international UFO investigative group was slated to continue when the U.N. General Assembly reconvened in 1979. However, in March 1979, Gairy was ousted from power in a military coup by the communist New Jewel Movement leader, Maurice Bishop. Ironically, Gairy was at the U.N. when his government was overthrown.

Ultimately, the reason the 1978 proposal for a United Nations UFO committee never came to fruition wasn’t that the U.N. failed to take the topic seriously. Instead, no other member nation decided to push the initiative forward following Gairy’s ousting from power and subsequent exile to the United States.

Guizzardi and Project Titan supporters see San Marino as a perfect fit to pick up the torch where Grenada left off 43 years ago by leading the charge to make UAP a topic of international discourse.

“The Republic of San Marino is indeed the most natural choice for this, given that the Republic is not at all unfamiliar with the UAP issue, as for thirty editions it has been hosting the World Symposium on UFOs and related phenomena, organized by the Centro Ufologico Nazionale of Italy,” said Guizzardi. “Its proposal to the U.N. would therefore represent a natural extension of this activity.”

The stigma surrounding the topic of UFOs or UAP has lessened in recent years, thanks mainly to testimony by credible eye-witnesses like former U.S. Navy F/A-18 fighter pilot Ryan Graves and actions taken by the DoD and politicians.

It’s Classified! A Deep Dive Into the Dark World of Keeping Secrets

However, thanks to extraordinary claims that lack concrete evidence or sensationalized affirmations by carnival barkers, public ridicule and caricatures of little green men still often plague efforts to establish any credible examinations of UAP.

That said, aside from one’s preexisting beliefs on the topic, there is precedent suggesting there is merit to Project Titan’s proposal of an international World Conference on UAP. In particular, the potential for scientific and technological breakthroughs.

In a previous interview, Dr. William Culbreth, an engineering professor at the University of Nevada Las Vegas, discussed how his unwitting involvement in one of the Defense Intelligence Agency’s (DIA) UFO-centric carve-outs led to tangible scientific advances.

“We’re looking into these propulsion technologies today, and this area alone led to several of my students pursuing PhDs who I don’t think otherwise would have,” said Dr. Culbreth.

With Project Titan organizers having presented their case, San Marino officials will now internally discuss whether to go forward with a proposal to the United Nations.

Should San Marino choose to move forward, the proposal for a World Conference on UAP will undergo a preliminary examination and discussion at the United Nations before being submitted to a vote by the General Assembly. If passed, the U.N. would then proceed with establishing the structure for the international UAP World Conference.

Guizzardi explained that it may be a month before San Marino officials reach a decision on the proposal. “At present, just a few days have passed since the submission of the proposal. It is difficult to make any forecast but I estimate that a period ranging from a couple of weeks to one full month is the more probable wait,” said Guizzardi.

In the meantime, Project Titan supporters are hopeful that San Marino will decide to move forward, and UAP will become a topic of collaborative, international discussion.

“The neutrality of San Marino makes it an excellent choice for an international forum of this kind,” said Guizzardi. “San Marino City could really become ‘the Geneva of the UFOs’.”