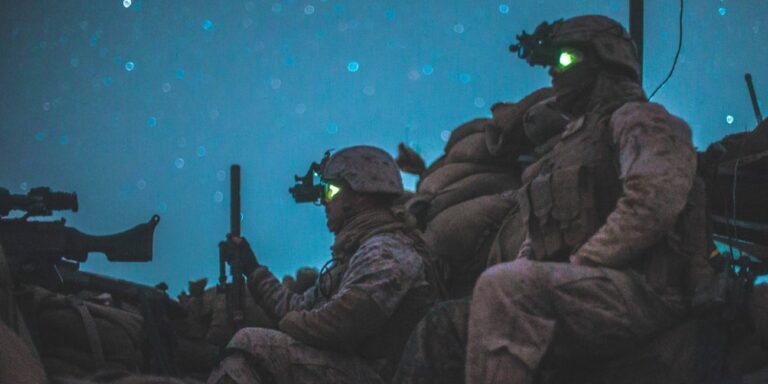 
Science fiction author S.T. Campitelli weighs in on the future of supersoldier technology

The challenge for the future-focused, speculative science-fiction writer is like any other author’s – to create a story that people want to read. But, coming hard behind that with afterburners on, is a second challenge when writing about a close-future scenario – creating a world with science and tech grounded in a believable reality, yet exotic enough to have the escapist factor. That was the challenge I wanted to explore in my work, and making the supersoldiers of tomorrow seem believable is an important part of that.

Set in a post-apocalyptic Melbourne, Australia, of 2052, The Fall is placed in a future close enough to be visualized – at around 30 years away, it’s conceptually accessible – but far enough to have witnessed changes in current tech and so opening new possibilities to progress ideas many of which are a reality right now.

So, what’s on the horizon? While tomorrow’s supersoldiers and the possible technology they may use seem like science fiction, very real technological developments today may prove these ideas are much closer to reality than we might think. Here are five ideas:

Armor has existed almost as long as people have taken up weapons. While the form of the armor is a world away from what it was when Roman legionaries were stalking ancient German forests, the function certainly isn’t. The wearer needs maximum protection in extremely prejudicial situations, and bio-armor provides that defensive functionality and crucial life-preservation elements.

Our 2052 supersoldiers are geared up in the BACC – Bio Armour Combat Chassis – full-bodysuit consisting of an intelligent-systems helmet integrated with soft and hard body armor. But is it all imaginary? Yes and no. Made of fictional ‘smartfybre,’ the material is a lightweight but highly resilient carbon-nanotube mesh of graphene with a reinforcing cross-matrix of goethite thread with super flexible fibre-reinforced hydrogel at the joints.

Graphene is not new. Andrew Geim first discovered it in 2002 at the University of Manchester. Although the ultra-thin carbon sheet is thought to be the most robust material on Earth, a challenge has always been to turn it into a workable material. In 2017, a team of researchers at MIT designed a new material with graphene, modeling it into a sponge-like configuration called a ‘gyroid,’ an incredibly light yet amazingly strong sponge-like configuration. A shape taken from nature, gyroidal graphene is about ten times stronger than steel, and just as importantly, it’s more workable. While it is still prohibitively expensive to produce graphene products, by 2052, we may be there.

Like super-strong goethite, the hydrogel at the joints of the BACC suit is also a real material. A mesh developed by Japanese scientists is thought to be five times stronger than carbon steel, yet flexible and stretchable. A fabric that brings together hydrogels like those found in contact lenses or Jell-O (yes, the kid’s treat) with glass fibres, the result is a super resilient yet elastic material that could have a range of future applications, including use in artificial organs and prosthetics and, according to one of the developers, decent defense against a bullet, making it an ideal material for our BACC suit.

Are you a science or speculative fiction writer? Do you have cool future technology on your brain that you want to pitch to our ‘Ideas’ section? Send story pitches to tips@thedebrief.org.

But the BACC needs to be more than just body armor, it’s also about life preservation, and that’s where medical responses enter the picture.

One of the biggest dangers to combat soldiers, and supersoldiers, is not bullets, but illness. So, with that in mind, the BACC has embedded ‘In Vivo Nanoplatforms’ able to deploy nanobots to treat sickness or even trauma at-site almost as soon as it appears. Sound fanciful? Work began on this in the US more than eight years ago. It needs to be noted that current nano-delivery systems are passive as they’re transported through the body by blood circulation, but again, by 2052, that may well have changed.

Two other critical medical responses to injury are compression and the stemming of blood flow. The BACC suit contains more than twenty thousand embedded muscle sensors expanding and contracting to first assist with movement, crucial in fatigued troops, but also to cover and compress open wounds. Stemming blood flow is perhaps the most critical element of life preservation until the wounded can be transported to a medical facility, and ‘coag-spray’ seeks to perform that function.

The current best practice in medical adhesives is, amazingly, superglue – yep, the stuff you use to glue your mum’s priceless vase back together after you’ve shattered it with an errant basketball. A coagulant ‘bio-inspired’ by, of all things, the humble slug could be the way to seal wounds and save combat lives, and the ‘coag-spray’ is, as much of the tech in The Fall, inspired by actual developments.

What about communications? Our 2052 supersoldiers are equipped with the fictional ‘360’ – a comms and apps system based on microchip tech implants at the back of the neck. Wearable tech? Embedded implants are here now, so I imagined that by 2052, we would no longer be using hand-held devices, but have them in a virtual-space array around us as hovering, movable, tactile apps surrounding the head – hence the 360 – activated with a swipe through the app image in front of the face.

Far-fetched? The microchip debate is already taking place with, at the very least, one Swedish company already into it for employees with subcutaneous chipping. The ‘360’ gives our supersoldier squad-linked comms providing not just communication capability but direct access to mission informatics such as ammunition levels, med vitals like pulse and respiration rates and hydration info, and bio-proximity alerts giving reads on possible enemy movement.

But hang on, we can’t touch the projections and activate them, can we? Haptic technology would suggest we can. Haptic tech is behind what makes your smartphone generate physical feedback when you touch buttons, for instance. However, through ultrasound technology, the much greater possibility of experiencing a tangible result when handling virtual objects is possible right now – our wearable and tangible apps could well be a 2052 reality if UK company Ultrahaptics keeps up its work in this (virtual!) space.

Devices of Unknown Origin Part I: Mystery in the Caribbean

But how can a small projection of a virtual app even occur? It already is. Ostendo Technologies in California has developed an imager chip smaller than a piece of chewing gum that generates crystal clear 2D and 3D imaging from a phone or flat display device, bringing images to life when paired with a miniature projector. The BACC helmet provides precisely all of this tech to our supersoldiers in 2052.

Of course, one of the most visible and not only physically but emotionally confronting challenges facing combat soldiers is the loss of limbs. Giant leaps have been made in this space with bionics and artificially intelligent prosthetics that speak directly with the wearer’s nervous system enabling soldiers in many cases to resume normal and, in some cases, bio-enhanced lives. Given the explosion of tech advancements in this space, it’s not at all a stretch to think that our 2052 soldier may well be the recipient of bio-enhanced eyes, legs, arms, or hands.

But it’s not just in trauma response that bio-enhancements or augmentation might serve our supersoldier; we may soon see prosthetics or implants that look to improve cognitive, psychological, and physical performance or look to enhance pain, stress, or fatigue tolerance.

Sound like a stretch? It isn’t. Our sci-fi supersoldiers may not be as far away as you might think.

Author caveat: I am neither a scientist nor a doctor; I am a fiction writer. Any tech bloopers or outright mistakes in this article and, by extension my books, are totally mine. What I propose may not necessarily be new or perhaps even doable, but it’s my job to imagine it so.

S.T. Campitelli is a long-time educationalist specializing in the university sector in Australia. The Fall (books 1 and 2) are the first two books in his debut post-apocalyptic trilogy set in Melbourne, where he currently lives. Follow him on Twitter and check out The Fall at Amazon or The Fall homepage.