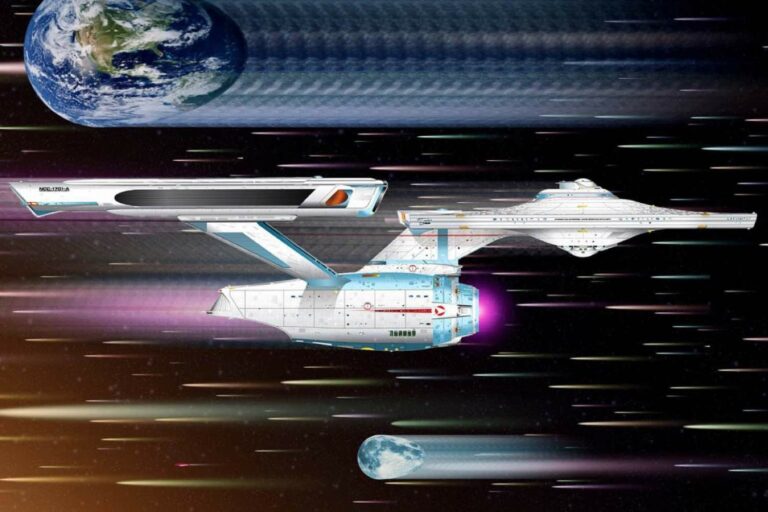 Ever since Captain James T. Kirk first ordered Chief Engineer Montgomery Scott to jump the Starship Enterprise to warp speed, real world scientists and engineers have looked for ways to bring the concept of faster than light travel into reality. A number of solutions have been proposed, but nearly all require a highly theoretical substance called ‘exotic matter’ to operate, or are otherwise limited to sub-luminal travel to avoid having to use exotic matter altogether.

Now, a recent paper by a physicist with over ten years experience in practical applications has proposed a solution that may finally break through those limitations, which has the potential of bringing into existence  the first real-life warp drive.

“The solutions I pursued in my paper are able to travel at arbitrary speed, either below or above the speed of light,” said Dr. Erik Lentz, the author of the new proposed warp drive in an email to The Debrief. “This is the first example of positive energy superluminal solutions in the literature.”

The first real world attempt to move the warp drive concept from science fiction to science fact was made by Mexican mathematician Miguel Alcubierre, who’s 1994 proposal represents the beginning of the official literature. Unfortunately, the “Alcubierre Warp Drive” as it has come to be known, requires a staggering amount of energy, along with that dreaded exotic matter. As previously noted, this highly radioactive stuff is only theoretical in nature and not something researchers have actually observed in nature, much less created.

A handful of variations have been suggested since, including a 2010 update to the Alcubierre Drive’s physical design made by former NASA engineer Dr. Harold G. “Sonny” White. That change was able to reduce the amount of energy needed to a less daunting number, although still well out of the realm of viable application. White’s solutions also still required exotic matter, albeit significantly less than the Alcubierre solution.

Since then, a handful of new solutions have cropped up, with each one seemingly offering its own set of limitations and benefits. One such drive concept covered by The Debrief involved a whole new way of looking at physics, leading the engineer behind that warp drive to apply for an actual patent. As of March, 2021, that patent application was still pending.

Around that same time, a group out of Switzerland known as Applied Physics (APL) put forth their own concept, and unlike previous solutions, their drive required no exotic material to create its warp bubble. Unfortunately for Captain Kirk and his resourceful, if not somewhat culturally inappropriate engineer, (especially for the 23rd century, right?) this shift to conventional materials limited their drive to subluminal speeds. In short, they got rid of the need for exotic matter, but lost the ability to go faster than the speed of light.

In his current proposal, Dr. Lentz not only looked to do away with exotic matter, but also left open the possibility of traveling at and above light speed.

“This is the first example of hyper-fast solitons resulting from known and familiar sources,” says the abstract of the published paper, “reopening the discussion of superluminal mechanisms rooted in conventional physics.”

To explain how his concept is different from those already proposed, Dr. Lentz first pointed The Debrief to the physical structure of the classical Alcubierre Drive, on which nearly all other solutions are more or less based.

It is without a doubt an image that has become inextricably linked with pretty much all scientific literature on warp drives, including those previously covered by The Debrief. However, says Lentz, “this picture is not an essential feature of a warp drive.”

Instead, he says, a solution proposed by physicist Jose Natario back in 2002 showed that the expansion and contraction wasn’t necessary to transport the ship forward. That work, says Lentz, led him to rethink how a warp could be created using only traditional matter and not exotic matter. “[Natario] showed that the expansion could be trivial (zero) everywhere and still perform the same task of transporting a ship.”

This is a significant breakthrough, he says, because it means that exotic matter that warps the space in front of the theoretical passenger as well as behind them in nearly all theoretical warp drive solutions is no longer needed. And, says Lentz, by building on Natario’s theory he has created his own variation that he believes is even more viable because it is rooted in conventional physics. Of course, Lentz does freely admit that his theory is somewhat novel even in this highly theoretical arena. “The expansion factor in my proposal is stranger still [than in Natario or Alcubierre], having regions of large expansion and contraction of space surrounding the central region containing a ship.”

Aside from this key material difference, Lentz indicated that his solution also differs from Alcubierre and most others geometrically, due to how the energy is placed around the warp bubble.

“In the Alcubierre solution, the energy density and curvatures are maximally separated, with the energy being restricted to a small torus between the regions of high contraction and expansion,” he said, once again evoking the classic image of the Alcubierre Warp shown above. “The curvatures and sources in my proposal are instead highly correlated, with the regions of high energy density and high expansion and contraction overlapping almost exactly.”

It is these “geometric” distinctions between his concept and the traditional concepts that Lentz says make it a potentially more viable warp solution than those previously proposed.

Of course, like all of the drive concepts proposed since Alcubierre, the “Lentz Drive” is still completely theoretical. He does, however, see a few steps that can be taken right away to try to move his version closer to reality, which like all previous drive theories includes reducing the amount of energy needed.

“Fortunately, there are a number of very effective energy-saving mechanisms for the Alcubierre drive described in the literature,” he told The Debrief.

Lentz did, however, acknowledge that those techniques for saving energy proposed by White and others also require exotic matter, a substance his warp drive concept has already successfully done away with. Nonetheless, he thinks that the key to reducing the energy needed in his drive may still be found in that previous work, with one hitch. “The challenge would be to either modify these mechanisms to operate using only conventional sources, [like his proposed theory which does not require exotic matter] or to innovate novel energy saving techniques.” In essence, if their energy reduction techniques don’t work on his drive concept due to the lack of exotic matter, then a whole new solution not yet proposed would need to be found.

Fortunately, Lentz says, his drive already accomplishes some of that goal since, “not all the energy needs to come directly from the reactor, as we expect much of the energy sourcing the bubble to come from the particles’ rest masses.”

Those particles, known in physics as solitons, are at the heart of the Lentz solution, and aside from any theoretical attempts to further reduce energy needs, are something he believes represent the most viable area for future, practical testing.

“After the energy requirements are low enough and suitable means of creating such solitons has been found, I would want to have the existence of such solitons confirmed in a laboratory setting for a small (~1m radius), slow (~km/s speed), but detectable soliton,” he said.

Outlook: The Next Generation of Space Technology

As far as the next hurdle to creating a testable, practical version of a full blown warp spacecraft capable of a five year mission to seek out new life and new civilizations, Lentz told The Debrief he sees a handful of reasonable goals going forward, including zeroing in on a viable energy level for a real world, testable drive concept using only current power generation technology.

“The target energy level is where a bubble of radius ten meters moving at 1% of the speed of light could be powered by a modern day fission reactor.”

When asked where his research goes from here, or whether he might try to patent his concept like that Chicago area inventor, Lentz indicated that he was considering all options, including something of that nature.

In the end, Lentz wanted it made clear that his theoretical work is just a part of a larger, rapidly growing body of work in this area, and that the recent increase in new warp drive concepts since Alcubierre’s 1994 proposal gives those in his field hope that a real, testable version may be closer than we think.

“It has been exciting to see how much progress has been made in this field recently,” Lentz said. “and I think there are many more advances ready to be made. I am looking forward to seeing what the next few years bring.”