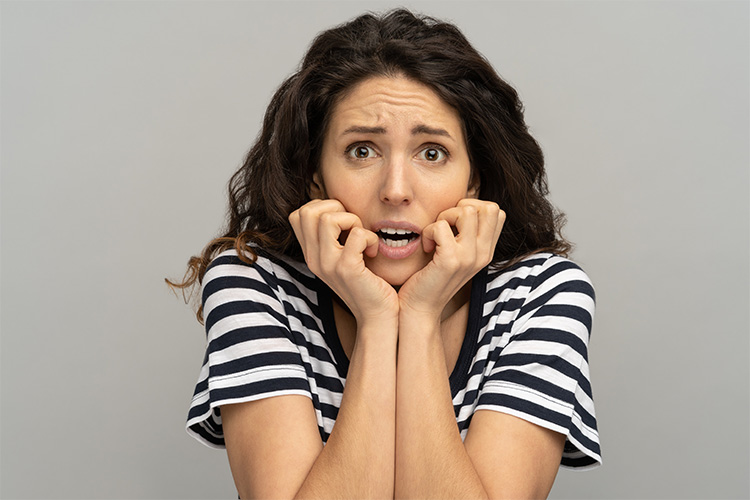 In a recent experimental study, German scientists say they have discovered that electrical stimulation to a specific brain region can prevent fear responses from returning following the desensitization of unpleasant stimuli.

During testing, researchers found that physiological autonomic fear responses, such as increased heart rate and skin conductance, toward previously frightening circumstances, could be eliminated by applying transcranial direct current stimulation (tDCS) to the ventromedial prefrontal cortex region of the brain’s frontal lobe.

The findings for this first-ever test of tDCS to facilitate fear memory extinction were recently published in Translational Psychiatry.

Researchers hope this discovery can be further explored, one day offering a new method for tackling difficult-to-treat anxiety and trauma-related mental disorders.

For its survival, a species needs to be able to recognize and respond whenever a dangerous situation presents itself. For human beings, this survival trait is exhibited in the intensely unpleasant emotion known as fear.

Fear is not merely a psychological phenomenon. The perception or anticipation of a threat is accompanied by a physiological response, commonly known as the “flight-or-fight” response.

Fear occurs whenever a set of cues previously associated with a threat appear before a person is confronted with imminent danger. Experiencing fear toward cues indicative of a legitimately dangerous situation is called “rational fear.”

As important as it is to recognize dangerous situations, it is just as important to distinguish when conditions change and previously threatening cues turn out to be harmless. Scientists call this process of learning which cues are associated with legitimate threats and which are not “fear memory recall.”

By experiencing positive outcomes in previously perceived frightening situations and forming what is known as “fear extinction memories,” one establishes what cues should and shouldn’t be associated with legitimate threats.

One problem with the fear memory recall system is that terror-inducing events are much stronger and more enduring than fear-extinction memories. Consequently, traumatic experiences can often create memories that develop into persistent and excessive fear responses towards otherwise non-threatening objects or situations.

From an evolutionary perspective, this makes sense. For survival’s sake, it is better to misperceive a benign situation as threatening than to view a dangerous encounter as safe.

However, this can also create debilitating “irrational fears,” including phobias or anxiety disorders.

For example, a war veteran who survived a blast from a roadside improvised explosive device (IED) may experience extreme anxiety whenever riding in a car because the act of being in a vehicle cues fear memories of the traumatic event.

In this example, even repeated uneventful car trips may, unfortunately, do little to create new impactful fear extinction memories because the recollection of the previous traumatic event has made such an emotionally intense fear memory.

Medication can be used to help manage symptoms associated with anxiety disorders and irrational fear. Tranquilizers can help avert panic attacks, while antidepressants can help treat other underlying feelings of depression or learned hopelessness. However, medication alone is ineffective in eradicating specific irrational fears.

Through various techniques such as cognitive behavioral therapy (CBT), eye movement desensitization and reprocessing (EMDR), or exposure therapy, a person is exposed to an irrational fear or confronts trauma-induced memories in a safe clinical setting. The effectiveness of these techniques is rooted in a person’s ability to create new extinction memories to overcome previous fear memories.

Systematic desensitization and exposure therapies can often successfully treat irrational fears that lack a specific known cause. Such as anxiety disorders or phobias that are believed to stem from genetics, like the fear of snakes, spiders, heights, social anxiety, or agoraphobia.

However, because fear extinction memories are much more fragile than fear memories, it can be challenging to provide lasting treatment for trauma-induced irrational fears through systematic desensitization therapy.

“Unfortunately, patients with anxiety, stressor- and trauma-related disorders have difficulties in fear extinction, which in turn hampers responding to treatment.”

Examining the physiological mechanisms behind fear, animal research has shown that the ventromedial prefrontal cortex region of the brain plays a significant role in the consolidation of fear memories.

Scientists have theorized that stimulating activity to the ventromedial prefrontal cortex might better consolidate fear extinction memories to help overcome powerful fear memories. However, until now, this theory has never been tested.

To investigate how enhanced neural excitability might foster the eradication of fear memories, researchers conducted a sham-controlled double-blind experiment using 40 student volunteers from the University of Greifswald in Germany.

To incite a fear response, researchers administered an “unpleasant, but not painful” electric shock to participants’ hands whenever they were shown one of two different pictures.

Participants began to quickly demonstrate a fear response towards the image that preceded an electrical shock by measuring autonomic responses such as muscle activity in the eyes, skin conductance and heart rate, and the conscious expectation of receiving an electrical shock.

In a follow-up session, participants were shown both pictures, only this time, no shocks were administered to allow students to form a fear extinction memory.

While all the study subjects were hooked with tDSC electrodes, half of the participants unwittingly went through a sham procedure in which no electrical stimulation was provided. Because one cannot feel tDSC stimulation, the sham group did not know they were not receiving the electrical signals.

Afterward, participants underwent the same procedure as the day before, with shocks administered whenever one of two images was shown. This was followed by another round with no electrical shocks to imprint fear extinction memories.

Unsurprisingly, researchers found that all participants established a fear memory and increased startle reactions to the image associated with the electrical shocks.

However, results also revealed that during the “return of fear test,” physiological fear responses were abolished in participants who received tDSC stimulation.

Conversely, the sham group that did not receive electrical stimulation of the ventromedial prefrontal cortex showed significantly increased autonomic responses, consistent with the fear response expected for someone who has re-experienced an unpleasant event.

“Typically, fear extinction memory consolidation and recall is rather fragile, as fear responses usually rise again after unpleasant events have been re-experienced,” Dr. Szeska explained. “For example, even after patients get rid of their fear of dogs, they might experience a resurgence of this fear if they get bitten again.”

Integrating tDSC stimulation during exposure therapies could help consolidate fear extinction memories. Ultimately, the hope is that this recent discovery can improve the treatment of persons suffering from trauma-induced anxiety or stress disorders.

However, researchers caution that more work must be done before the procedure can be recommended as an effective treatment. Specifically, two major questions still need to be addressed about tDSC stimulation’s ability to impact fear memory extinction.

“First, optimal stimulation parameters (frequency, amperage, timing etc.) that lead to the strongest fear-reducing effects need to be identified,” explained Dr. Szeska. “Second, we need clinical studies that examine whether this type of brain stimulation may, in fact, prevent the return of pathological fear.”