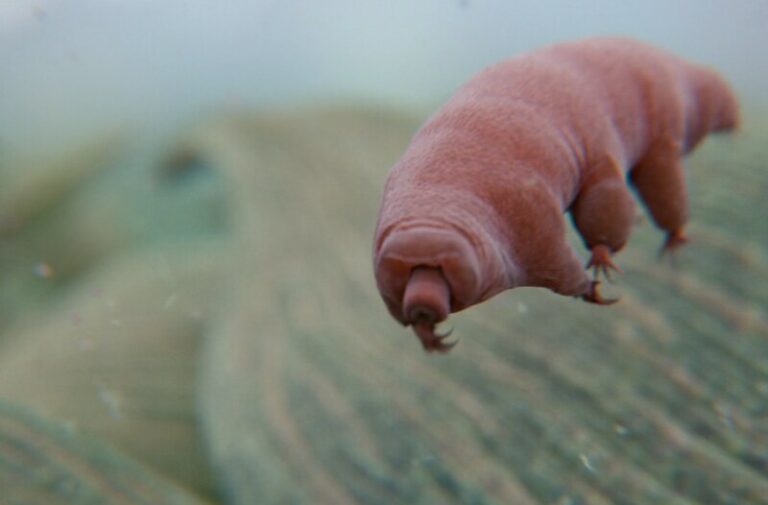 For all our accomplishments as a species, humans are pretty fragile. Tardigrades, on the other hand, are tough as hell.

If our atmosphere was tweaked ever so slightly, we’re goners. If our environment is too hot or too cold, it’s curtains. If a giant asteroid decides to beeline it to Earth again, roll credits. When looking at the technological marvels humans have achieved to overcome our shortcomings, it can be easy to forget that the conditions that allow us the luxury of existing at all are nothing short of a miracle.

This is why it is incredible and humbling that an animal less than a millimeter long has us beat a hundredfold in the survivability department.

Tardigrades look like extremely small and usually translucent bears, often colloquially referred to as “water bears” given the environments they are most commonly found in, and they are nature’s finest doomsday preppers. They only live for about a year, but should that year include living in an underwater volcano, the arctic, a giant meteor strike, or even space- they’ll find a way to endure it.

Their track record is impressive, having survived all five of Earth’s mass extinctions. But unfortunately for some tardigrades, as soon as we found out about their incredible survivability- human curiosity ran hog wild. Here are just a few of the insane things we have subjected the little creatures to.

1. We Dosed Tardigrades With A Stupid Amount of Gamma Rays

On the infinitely long list of world annihilating events in space that could happen but probably won’t, one will eventually come across gamma-ray bursts. While it is uncertain for sure how they are caused, theories suggest that when neutron stars or black holes collide- a tremendous burst of energy in the form of gamma rays is released into space. If Earth were to, unfortunately, be in the way of such an event, humans wouldn’t have to worry about it for very long- since we wouldn’t be around due to the devastating effects it would have on Earth’s ozone layer. Tardigrades, on the other hand, likely would survive the cataclysm.

A 2006 study performed experiments on the water bears in which they were subjected to extremely high doses of radiation in the form of gamma rays and heavy ions. The bears could withstand up to 5000 Gy of gamma rays and over 6000 Gy of heavy-ion radiation. In comparison, a human could die in mere hours of receiving exposure to only 5 to 10 Gy. One species of tardigrade called Ramazzottius varieornatus accomplishes this feat by utilizing a unique “damage suppressor protein” that protects its DNA from radiation damage, while the Paramacrobiotus sp. BLR species produce a UV-resistant and fluorescent material that allows them to survive while glowing in the dark.

Imagine riding a roller coaster that goes 3000 kilometers per hour and is about to crash straight into a desert. Odds are, few would wait in line for such an attraction, but water bears got exclusive seating. A study performed in May of this year featured the little guys being fired out of a two-stage light gas gun (which frankly look more like cannons) at speeds reaching almost 2000 mph into the sand. As tardigrades often do, they survived. However, impacts at higher velocities would prove fatal. The results are fascinating in a vacuum, but they also serve the purpose as to give more understanding to the theory of panspermia, which suggests that life on Earth may have originated from microorganisms stowing away on meteorites that would eventually come into contact with our planet. Given that tardigrades do not survive past the 3000 km/h mark, it is unlikely that the bears would survive the impact.

3. Accidentally Crashed Them into the Moon

Speaking of impacts, in April of 2019, the Israeli Beresheet spacecraft crash-landed into the surface of the Moon. It was supposed to be the first privately funded journey to the Moon, and despite the tragic outcome, there were at least no passengers on the ship. No human ones, anyway. It had not been initially revealed to the public that several thousand tardigrades were present on the ship, only coming out after it had crash-landed.

In the days following the crash, the status of the water bears was unclear and mostly left up to speculation. There were worries that the Moon could potentially become contaminated with the water bears, given their ability to survive in space. NASA has strict regulations concerning contamination of other extraterrestrial bodies and bringing potential contaminants back to Earth. However, the previously mentioned light gas gun study involving tardigrades concludes that they could not have survived the impact on the Moon, as it was significantly above the threshold that they could endure. In addition, current knowledge suggests that the water bears cannot reproduce in space, only survive, leaving any potential contamination of the Moon small.

4. We Purposely Froze Tardigrades for Thirty Years, Then Thawed Them.

So far, tardigrades have gotten a raw deal from humans, but not all of our water bear-related endeavors are harmful to the little guys. In 1983, a sample of Antarctic moss containing tardigrades was frozen. Thirty years later, researchers at Japan’s National Institute of Polar Research attempted to revive them. They succeeded. Of the two tardigrades present within the sample, one did not survive, but the other had fully revived within two weeks. With no idea or care that it had, for all intents and purposes, just time traveled, the water bear went about its business as usual, including laying eggs that also successfully hatched. According to Arizona State University astrobiologist Tessa Fischer, the tardigrades accomplished such a feat by existing in a “state of suspended animation.” In this state, their metabolism ceases, putting them in a “death-like” hibernation. “They’re even more indestructible,” Fischer told The Debrief, “and can survive near absolute zero temperatures, high pressure, vacuum, and even the absence of water, for a hundred years or more.”

Within the frozen sample was also a tardigrade egg, which incredibly was thawed out and hatched into a healthy tardigrade as well.

5. Launched Them Into Space, Again…

Perhaps their most exciting journey yet, over 5000 tardigrades were launched into space aboard SpaceX’s Falcon 9 rocket earlier this June. Their destination this time is the International Space Station. “With the ISS mission, they’re hoping to understand what genes are responsible for making them so hardy, especially in the context of adapting to the weightless environment of space,” Fischer explained.

According to NASA, “The results could advance understanding of the stress factors affecting humans in space and support development of countermeasures.” Fischer sees the future of this research focusing on the water bears’ incredible radiation resistance; something Astronauts could potentially be very vulnerable to in space. She states that it “can then be used as a guide to developing medicine for human astronauts.”

It is easy to read about the creatures and conclude they are invincible, but that isn’t true. They aren’t even considered extremophiles because most of what they do isn’t living but rather surviving. However, none of this is to take away from their incredible ability to survive. As technology continues to progress and our understanding of the creatures and their genome becomes clearer and clearer, perhaps humans could do what we do best and create ways to become a little hardier ourselves. And I’m sure I speak for all tardigrades when I say that they would most likely appreciate not being blasted out of a high-powered gun at 2000 mph anymore. But maybe they will have the last laugh in the end. If humans are crippled by a cataclysmic event that we fail to overcome- the water bears most likely will keep moseying on.