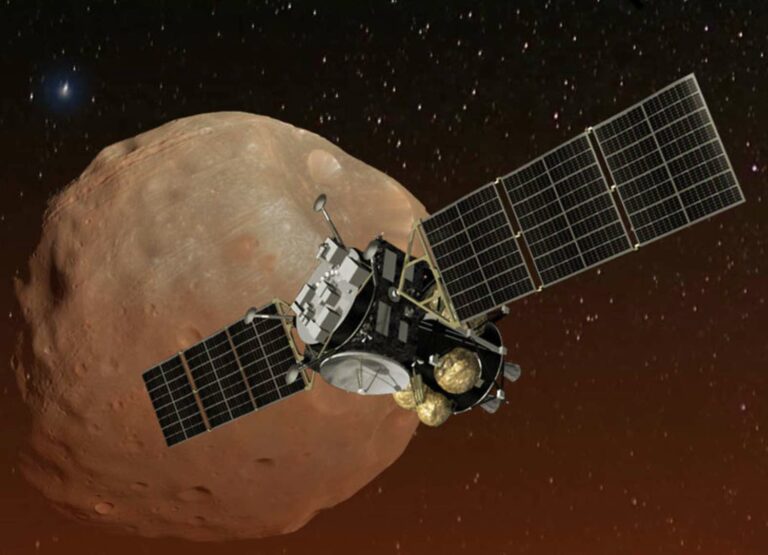 On February 18th, 2020, NASA’s Perseverance rover landed safely on Mars, setting the stage for the first flight by a human made vehicle on another planet, and continuing the search for possible evidence of past or present life on Mars.

Following that impressive feat, Perseverance commenced its science missions, including combing Jezero crater for tantalizing samples of Martian rocks and soil. The most intriguing samples will be cached away for a future mission, with hopes of bringing them back to Earth for more intensive analysis. More commonly known as Mars Sample Return (MSR), that mission is tentatively planned for some time later this decade.

Not to be outdone, Japan’s NASA equivalent, the Japanese Aerospace Exploration Agency (JAXA), has put together a Martian sample return mission of its own.

Dubbed MMX and tentatively scheduled for a 2025 launch, that mission hopes to land on the surface of Phobos, one of the red planet’s two moons, retrieve numerous samples (including possible ejecta from the Martian surface that ended up on the moon’s surface), and return those samples to Earth in 2029.

In anticipation of both MSR and MMX, Dr. Ryuki Hyodo, a veteran of previous JAXA missions including the successful sample return of material from asteroid Ryugu by the Hayabusa2 spacecraft, and his colleague Tomohiro Usui, have penned a piece for science magazine outlining how those missions could spur future international cooperation, as well as answer one of astronomy’s oldest questions.

In an email to The Debrief, Dr. Hyodo walked us through the science behind MSR and MMX, the motives behind his recently penned article, and how he believes these two missions looking for past and present signs of life on Mars have the potential to alter the course of human history.

The Debrief: Can you tell us a little about your background?

Dr. Ryuki Hyodo: My profession is planet formation in general, i.e., formation and evolution of planets, protoplanetary disks, exoplanets, moons, rings, and small bodies in general. I try to understand how diverse planetary systems form and evolve. So, I don’t call myself an astrobiologist. I usually use numerical simulations, analytical approaches, and sometimes experiments. I also call myself a planetary exploration scientist who tries to maximize the scientific value of the planetary mission.

TD: Have you previously written about biosignatures or the search for life on Mars?

DRH: I have worked on the planetary protection issue of MMX in which we had to prove that the MMX sample from Phobos is “safe” to bring back to Earth. Unless we prove it is “safe”, we were not allowed to do a sample return to Earth, which is related to this Science paper.

I have [also] calculated the amount of Martian materials that are transferred from Mars to Phobos by small asteroidal impacts on Mars.

Then, we considered several mechanisms that can sterilize potential microbes within martian materials, such as impact and radiation sterilization. We have shown that even if microbes existed on Mars and were transferred to Phobos, they were sterilized, thus “safe” to bring back to Earth. This means that dead remains may exist on Phobos’s surface!

TD: What specifically will Earth scientists be looking for when examining retrieved material from the MSR and MMX missions?

DRH: I assumed this question is not limited to “life”. Both MSR and MMX missions also have scientific objectives that [will] try to understand the evolution of Mars, [which] includes climate evolution, geological evolution, etc. Earth scientists will be interested in such evolutions of Mars, as Mars is one of the terrestrial planets.

TD: What methods will be used or should be used when examining those samples to determine if they contain signs of past or present life on Mars?

DRH: MSR contains multiple missions. Perseverance is its first step that [will try] to collect samples. So, the sample analysis plan is not widely shared yet.

Samples from Phobos would contain not only Martian materials but also Phobos materials, so after [the] samples are successfully back, [we will have to] sort the sample.

Optical microscopes and spectroscopy techniques are used to see particle shapes and elemental/mineral features. This information will help us to distinguish Phobos-originated or Mars-originated particles. Phobos material itself is also very important.

Once we understand the existence of Martian particles, we will look [more] deeply, trying to find any concentration of organics. Such organic concentrations are key to further discussion if they are the signs of life.

TD: If ancient or current life is found, how do we determine if it originated on Earth and was later seeded on Mars, or if it is life that evolved independently on Mars?

DRH: I think I have to be very careful to answer this question, because we are not sure how life has emerged even on Earth. So, there is not a definite answer for this in my opinion.

I will say, if we can find any well-preserved DNA fragments, for example, and if analysis goes well…we may be able to understand if such DNA is related to Earth-originated life or the one that independently evolved on Mars.

However, this requires a very well-preserved sample with a certain amount. So, we are not sure if we can easily make a conclusion on these points. We will do our best, but are not sure at this moment. Analysis techniques and devices will be improved, so let’s see what we can do in the future!

TD: How significant would it be if we found signs of life on Mars, past or present, in these samples?

DRH: Finding biosignature beyond Earth has never been done at this moment. We, humans, do not know any extraterrestrial life and its existence. If we find one, this could tell us the similarities and/or differences to Earth life. This could make a breakthrough on “what lifeform actually is”.

And, I think, this could be a similar situation when we first found an exoplanet in 1995. Before finding a planet beyond the solar system, our idea of the planet and planetary system were very much biased. After we found the first exoplanet, our understanding of planets greatly changed and now we [have] found more than ~4000 exoplanets.

TD: Much of your article seems like a call for international cooperation on these missions. Do you see a means to this cooperation, and how do you propose that take place?

DRH: This is a very important point.

MSR will look directly at Mars surface (i.e., Jezero crater) and they will try to have a large amount of samples back to Earth. This is their strength, while the negative side is they can only study the Jezero crater.

Imagine that you are in California, picking up a rock. Do you think that rock in California is always the same as rocks in Japan in hot springs? The answer is clearly no 🙂

We should have a diverse environment on the planet. The same applies to Mars.

MMX cannot bring a lot of samples to Earth (~10g) compared to MSR. But, MMX could obtain diverse Martian materials.

So, with MSR and MMX, we will collaborate to understand Mars evolution and its potential biosignatures from different aspects, from detail (by MSR) and from diversity (MMX). We play a complementary role to each other, and this is how we cooperate.

TD: If you could tell our readers one critical thing about your article and its subject matter, what would it be?

DRH: Here, I want to be very simple – Now, flagship missions of multiple space agencies are trying to bring samples from Mars. Having a sample is very different from just observing.

On Earth, we can use state-of-the-art techniques to analyze the sample. We can do a lot of science with the sample. So, let’s look forward to bringing the sample back to Earth!