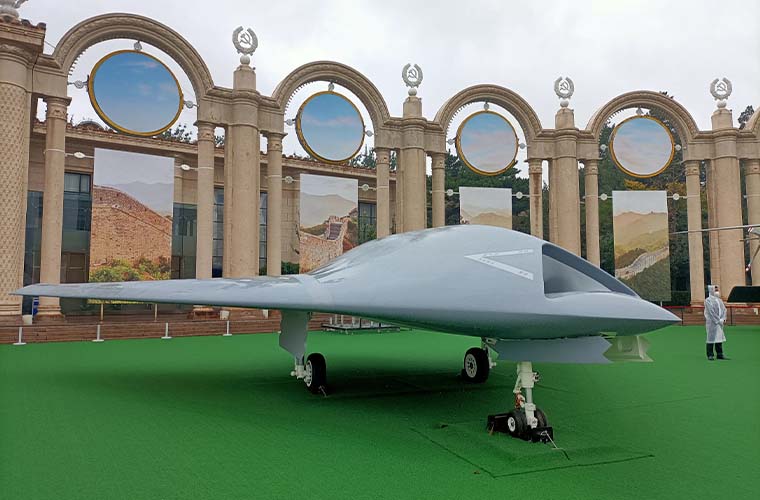 During this weekend’s celebrations for the National Day of the People’s Republic of China, Beijing showcased some of its latest military hardware, including offering a first-ever close-up view of its professed stealth combat drone, the GJ-11 “Sharp Sword.”

First revealed three years ago during National Day festivities commemorating the 70th anniversary of the founding of the People’s Republic of China, outwardly, the GJ-11 appears to be a veritable clone of the United States’ tailless blended-wing surveillance drone, the RQ-170 “Sentinel.”

A placard in front of a GJ-11 on display outside the Beijing Exhibition Center on October 2 read in Chinese, “Assault-11 UAV – The country’s self-developed unmanned combat aircraft with high stealth, strong penetration, and precisions strike capabilities that can carry out tasks such as offensive air superiority operations and suppression of air defense in a high threat and strong confrontation environment.”

This is the second time China has described the GJ-11 as a “combat aircraft” capable of launching precision-guided munitions and carrying out air superiority missions.

At last year’s Airshow China 2021, a scale model of the GJ-11 was displayed with two open internal weapon bays exposing four precision-guided munitions in each.

Based on the scale model, it is speculated that the GJ-11 could be capable of carrying up to eight Feiteng-5 (FT-5) 220-pound precision-guided air-to-ground missiles or two Feiteng-2 (FT-2) 1,110-pound satellite-guided bombs.

This would make it distinctly different from the RQ-170, if true, which is believed to be strictly a surveillance and reconnaissance platform.

There are, however, reasons to doubt that China has an operational variant of the GJ-11 capable of carrying offensive payloads.

Combining weapons capability while maintaining the characteristics of an unmanned stealth aircraft can be challenging. In early 2021, the Defense Advanced Research Projects Agency (DARPA) announced the LongShot program, awarding contracts to General Atomics, Lockheed Martin, and Northrop Grumman to begin preliminary Phase I design work for the development of a stealthy air-launched attack UAV.

So while military officials and lawmakers have expressed concerns over China increasingly catching up to U.S. military technology, the majority of defense analysts say the gap is still significant enough to make it unlikely China would leapfrog the U.S. in the development of stealth combat drones.

Additionally, based on photos uploaded to the Chinese social media site Sina Weibo, the GJ-11 on display this past weekend appeared to lack internal weapons bays capable of carrying munitions.

So aside from the 2021 scale model, there’s no evidence supporting Chinese claims of the GJ-11 being an offensive, combat-capable UAV.

Likewise, The Debrief could not independently verify that the GJ-11 displayed at the Beijing Exhibition Center was an operational UAV and not also a scale model.

China isn’t the first nation to try and reverse engineer America’s stealthy RQ-170. In December 2011, the Iranian Army successfully downed and captured a slightly damaged RQ-170 that had reportedly violated Iranian airspace. The U.S. government would later admit the drone was carrying out a surveillance mission for the Central Intelligence Agency (CIA) when it was potentially hijacked by an Iranian electronic warfare unit.

Iran, Russia, and China each have initiated programs to develop their own stealth, flying-wing UAVs shortly after Iran’s capture of an RQ-170.

In 2014, Iran showed off the Shahed 171 Simorgh (S-171), which it claimed was a reverse-engineered version of the RQ-170. Some defense experts have argued that rather than being a novel aerospace platform, the S-171 was merely the same captured RQ-170 with a new fiberglass hull.

Regardless, by 2018 Iran had abandoned the S-171 program in favor of a smaller flying-wing UAV, the Shahed Saegheh. In February 2018, Israel shot down and recovered an Iranian Saegheh UAV that had reportedly entered Israeli airspace.

Israeli Air Force Brigadier General Tomer Bar said the Saegheh was essentially a smaller knock-off of the RQ-170 that was “quite advanced and imitated Western technology.”

Oversized Animal Weapons May Actually Be a Big Bluff

Jointly developed by Sukhoi and the Russian Aircraft Corporation and billed as a “sixth-generation” stealth combat UAV, as of 2022, the S-70 was still in prototype status. The Debrief recently reported that the Russian industry is unable to produce military-grade drones, making it unlikely that the S-70 will become operational anytime soon.

China’s work towards a flying wing stealth drone similarly began in 2012-2013, with the launch of a program to develop new low-observable UAVs, dubbed AVIC 601-S.

Details of GJ-11 are largely unknown. However, Chinese media has reported the drone has a range of 2,485 miles and a top speed of 621 mph, in addition to “high stealth” capabilities. Video animation shared by Chinese-state media has shown the drone taking off from an aircraft carrier and deploying UAC swarms as decoys to protect the drone.