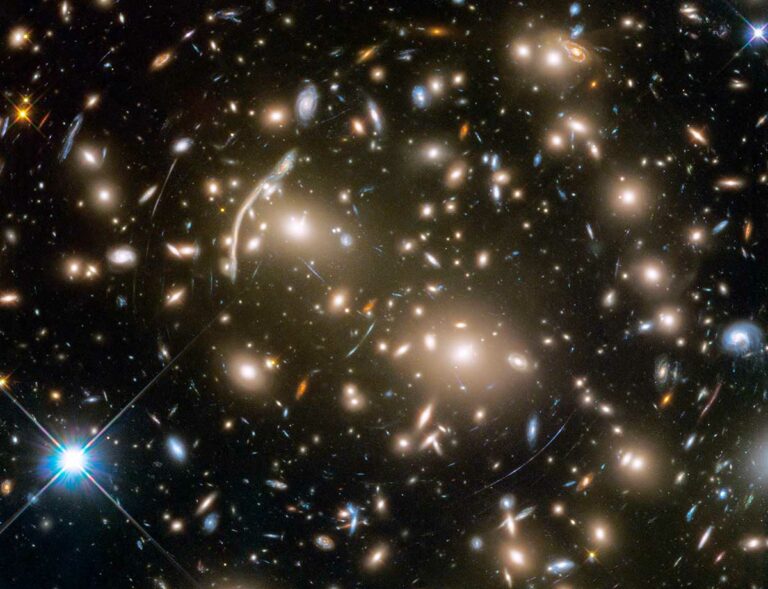 Gravitational lenses, or light blurring due to gravity in galaxies, is key for discovering new galaxies in our universe. (PC NASA, ESA, and J. Lotz and the HFF Team (STScI))

The actual age of the galaxy as well as the total number of galaxies in our universe have perplexed scientists for decades. Thanks to space observatories like the Hubble Telescope or the James Webb Space Telescope, astronomers can see further into space, revealing more about our universe. Additional advancements like machine learning could help astronomers glean even more information from what telescopes can provide.

Recently, with help from the Keck Observatory in Hawaii, a team of researchers was able to use new machine learning algorithms to find 5,000 potential new gravitational lenses that could change how we see the evolution of galaxy formation.

Background: What are Gravitational Lenses?

Gravity affects nearly everything around it; we are exposed to it every moment of each day, but don’t even notice it. In space, gravity can also play a key role in identifying galaxies.

According to NASA, gravitational lens happens when a large amount of matter, like a group of galaxies, creates a strong gravitational field that can distort light from the nearby stars. This blurring creates almost a magnifying glass-like phenomenon, which telescopes can identify. This process can also occur happen with stars, but it is more common for galaxies, providing astronomers with a clue to where new galaxies may be located.

To try and identify additional gravitational lenses, researchers from around the world collaborated to create a special machine learning algorithm. Using data from the Keck Observatory in Hawaii and Chile’s Very Large Telescope, the algorithm confirmed that 68 of the 77 lenses analyzed seem strong enough to represent gravitational lensing.

The researchers were confident that the algorithm could be used in the future to detect more lenses. Their research was published in the Astronomical Journal as part of the ASTRO 3D Galaxy Evolution with Lenses (AGEL) Survey, a program aiming to map the universe. According to astronomer Kim-Vy Tran from ASTRO 3D and UNSW Sydney, “Our goal with AGEL is to spectroscopically confirm around 100 strong gravitational lenses that can be observed from both the Northern and Southern hemispheres throughout the year.”

Since gravitational lenses can be difficult to detect, the researchers wondered if the same process could be applied to the search for dark matter, a still unknown substance in our galaxy that is believed to make up a majority of our universe. According to NASA, dark matter remains “one of the greatest mysteries of science.” If this algorithm or something similar could help detect and identify dark matter, it would represent a potential turning point for fundamental astronomy.

“We know that most of the mass is dark,” Tran added. “We know that mass is bending light and so if we can measure how much light is bent, we can then infer how much mass must be there.”

While the search for dark matter will no doubt continue, the data the new research has yielded is already providing astronomers with new imagery that will take them some time to unpack through further studies.

According to Professor Karl Glazebrook of Swinburne University, “Now we are getting images of these lenses with the Hubble Space Telescope, they range from jaw-droppingly beautiful to extremely strange images that will take us considerable effort to figure out.”