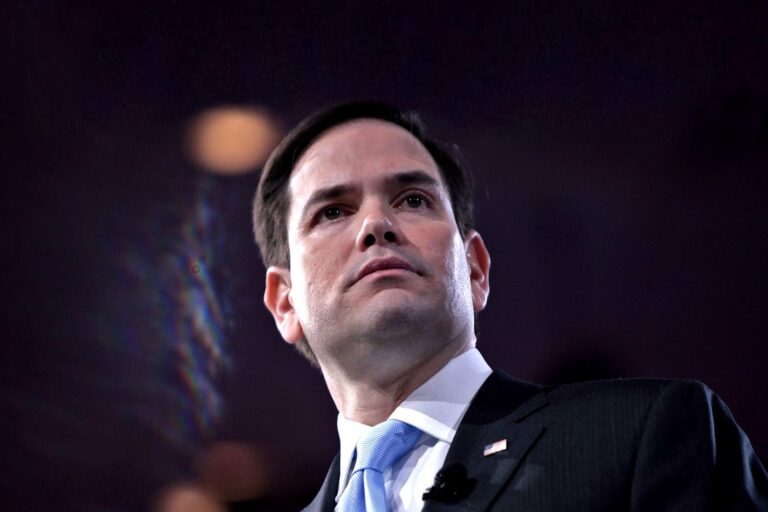 Florida Senator and Vice-Chair of the Senate Intelligence Committee Marco Rubio became the latest member of the U.S. government to weigh in on the subject of unidentified aerial phenomena (UAP) on Wednesday, saying that the “stigma” associated with the subject has hindered efforts toward studying it.

“We have things flying over military installations, over military exercises, and other places, and we don’t know what it is,” Rubio said during an early Wednesday appearance on Fox Business Network’s Mornings with Maria Bartiromo.

“It isn’t ours. It isn’t anything that’s registered to the FAA, and in many cases exhibits attributes of things we’ve never seen,” Rubio said of unidentified aerial phenomena being studied currently by a Task Force run out of the Pentagon and the Department of the Navy.

Rubio adds that he feels it is important that the U.S. government attempt to ascertain what the phenomena in question may represent, “without any preconceived notions.”

“Maybe there’s a logical explanation,” he added, acknowledging the possibility that some unidentified aerial phenomena observed by Navy pilots and others in government could represent “a foreign adversary that’s made a technological leap,” a possibility that was suggested during a recent appearance former Director of National Intelligence John Ratcliffe made on Bartiromo’s program.

Last August, the Pentagon announced the establishment of an Unidentified Aerial Phenomena (UAP) Task Force (UAPTF), according to a DoD statement. “The Department of the Navy, under the cognizance of the Office of the Under Secretary of Defense for Intelligence and Security, will lead the UAPTF,” the statement read.

“The Department of Defense and the military departments take any incursions by unauthorized aircraft into our training ranges or designated airspace very seriously and examine each report,” the Pentagon statement read. “This includes examinations of incursions that are initially reported as UAP when the observer cannot immediately identify what he or she is observing.”

As far as the possibility that some of the unidentified aerial phenomena the UAP Task Force is studying could have exotic origins, Rubio says we “don’t have to go that far.”

“It’s simple,” Rubio told Bartiromo. “There are things flying over national security installations, we don’t know who they are, we don’t know what it is, it isn’t ours, [and] we need to find out.”

With the passing of the FY 2021 Intelligence Authorization Act earlier this year, the UAP Task Force was given the greenlight to produce a report within 180 days about its findings. However, Rubio told Bartiromo he isn’t certain that the report will be ready by the time of the 180-day deadline. He added that once the report does appear, that doesn’t necessarily mean it will contain conclusive information about the possible nature and origins of the UAP Task Force is studying.

“I don’t know if we’re gonna know,” Rubio said. “I’m not sure that by June 1 they’ll have reached a hard conclusion about what they’re dealing with, and there may be more questions—or new questions—than full answers after the fact.”

Rubio added that the UAP subject is “being taken more seriously now that it ever has been,” despite the prevailing stigmas against it that persist.

The Florida Senator’s statements on Wednesday marked his second acknowledgement in recent days of attitudes toward the UAP subject that may have hindered its serious study. On Monday, a TMZ reporter questioned Rubio briefly on camera, where the politician said that “no one wants to sound weird.”

Since 2020, Rubio has played an active role in spearheading government efforts toward the study of unidentified aerial phenomena. Last summer, a provision contained within the annual intelligence authorization bill produced by Rubio and the Senate Intelligence Committee officially requested the establishment of a task force, advising that it conduct a comprehensive review of UFO-related material from several different branches of government.

However, information obtained by The Debrief via Freedom of Information Act Requests revealed that officials that included the Vice Chiefs of Staff for the Navy and Air Force had been given classified briefings about UAP at least as early as October 2019. It was also learned by The Debrief that that at least two classified intelligence reports involving military encounters with UAP had been circulated within the Intelligence Community since 2019.

In an interview last July with CBS Miami’s Jim DeFede, Rubio appeared to confirm that the U.S. government has spent many years looking at information it has collected on UAP. As Rubio said during the July 2020 interview, the Office of Naval Intelligence has “seen reports on this now for the better part of a decade,” and that “other countries have had similar reports.”

When asked on Monday if he thinks UFOs might represent a threat, Rubio advised taking things “one step at a time.”

“I’m not saying that’s what it’s all about,” the Senator said, adding that he believes the military would admit it if they had reached any definitive conclusions about whether UAPs might represent a form of technology, and if so, what that could mean.

“I think they’d tell us what’s going on,” Rubio said, though he added that based on what information he has seen, the military doesn’t know what it is.

Update: The Debrief reached out to Senator Rubio’s office for clarification about what he and others have stated as a June 1 deadline, which other outlets have reported as June 25 on account of the 180 days allotted to the Navy’s Task Force. Currently, we have not received a response from his Florida office; this article was also updated to clarify Rubio’s position as Vice-Chair of the Senate Intelligence Committee since February, having been Chair at the time the bill was presented last summer.