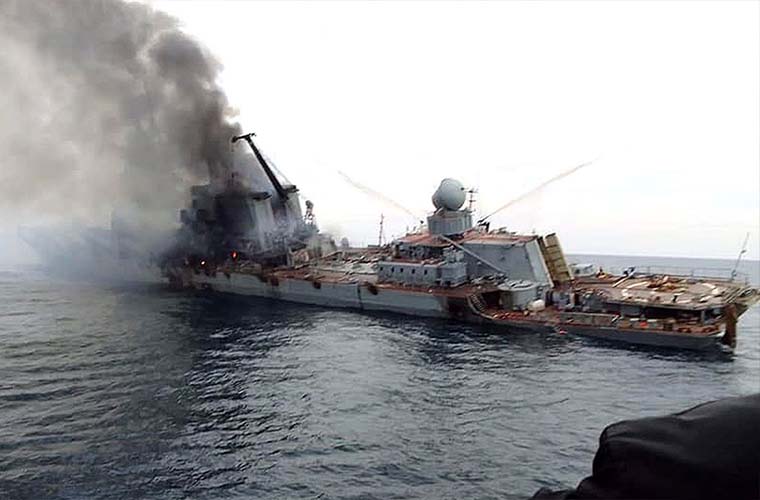 Image that surfaced online, believed to show the Moskva shortly before sinking.

One of Russia’s most notable military vessels and the flagship of the Russian Black Sea Fleet, news of the Moskva’s sinking is one of the most stunning developments in Russia’s ongoing war with Ukraine.

Adding to Russia’s embarrassment, while offering a huge morale boost to Ukraine, the Moskva was the Russian warship from the now-legendary Snake Island, “Russian Warship Go F—-k Yourself” incident.

Specifics surrounding the Moskva’s loss have been shrouded in questions. However, in recent days, new details have emerged that offer clues about the Moskva’s final moments.

The original source of the images is unknown, and The Debrief cannot independently verify their authenticity. However, most longtime, reputable open-source intelligence analysts and naval experts have all agreed that the heavily damaged ship seen in the images is indeed the Moskva. Several military analysts consulted by The Guardian likewise said the damaged vessel appeared to be the Moskva.

From the images, the Russian warship can be seen listing to the port (left) side as plumes of smoke rise from the ship’s superstructure. The central point of damage appears to be in the vicinity of the ship’s engines and behind the main P-1000 Vulkan anti-ship missiles. Several black spots and smoke damage along the aft suggests the fire may have been worse before the images were taken.

Author, naval historian, and respected OSINT analyst, H.I. Sutten noted that possible puncture marks on the side of the hull below the fire damage could support that the Moskva was hit by a missile strike(s).

A three-second video filmed from a nearby ship shows a rescue tug approaching the burning Moskva. The open-source intelligence site OSINTtechnical claimed the tugboat was the Russian Black Sea Fleet’s Project 712 Shakhter (SB-922).

Someone can be heard yelling in Russian, “What the fuck are you doing?” just before the recording ends abruptly.

Experienced ship spotter and open-source analyst Yooruk Isik said the images and video appear to have been filmed from the Project 22870 rescue tug, the SB742, from the Black Sea Fleet’s 145 Rescue Ship Squadron, 1st Group.

Notably, all of the aft life-raft canisters have been jettisoned, and there are no sailors visible on deck, suggesting the ship had already been abandoned by the time the images were taken.

Ship Captain and author of Fire On the Horizon, John Konrad V, offered several thoughts about the images on Twitter.

Konrad said the Moskva appeared to have lost a significant amount of buoyancy. However, the cruiser was probably not in immediate danger of sinking whenever the images were taken. According to Konrad, the heavy dark smoke coming from the ship suggests a serious onboard fire, with heavy fuels or synthetic materials likely burning off.

Acknowledging minimal information can be gleaned from the images and brief video, based on the calm weather, reserve buoyancy, the fact the ship still had power, and smoke-free helideck, Konrad said his best assumption was the Moskva could have been saved.

“My best guess is the captain of the Moskva abandoned his ship too early,” said Konrad.

How Was The Moskva Taken Down?

While new images and video provide a few more details leading up to the Moskva’s eventual fate, exactly how the Russian flagship was damaged remains a mystery.

Several hours later, the Russian Ministry of Defense acknowledged the Moskva had been “seriously damaged” after “ammunition detonated as result of a fire.” The Kremlin said the “crew was completely evacuated” in its initial statement, and the ship was reportedly being towed back to port in Sevastopol.

Later on Thursday evening, the Russian MoD revealed the Moskva had sunk.

“During the towing of the Moskva cruiser to the designation port, the ship lost stability due to hull damage, sustained during the detonation of ammunition because of a fire. Amid the heavy storm, the ship sank,” the Ministry of Defense was quoted by the Russian-State media outlet Tass.

So far, Russia has not elaborated on the Moskva’s loss or what caused the missile cruiser to catch fire, much less confirmed it was hit by an anti-ship missile(s).

Shortly after initial reports that the Moskva was on fire, Telegram accounts purportedly linked to Russian mercenaries the Wagner Group claimed Ukraine had used Bayraktar drones to distract the Moskva’s early warning systems, allowing a coastal anti-ship missile battery somewhere near Odesa to successfully take out the missile cruiser.

The Debrief cannot verify the credibility of these claims nor explain why supposed Wagner Group mercenaries would have known specific details of the stricken warship shortly after it was reportedly damaged.

In a Thursday Pentagon press briefing, a senior U.S. Defense official said reports that the Moskva was hit by Ukrainian Neptune missiles were “credible.”

Aside from the initial claims involving Neptune anti-ship missiles, Ukraine has been cagey in taking responsibility for taking out the Black Sea Fleet’s flagship.

In an interview with CNN’s Jake Tapper, Ukrainian President Volodymyr Zelensky said, “We know that it is gone. For us, it is a serious weapon against our country. That is why the fact that it sank is not a tragedy for us. I want you and everyone else to know that. The less weapons the Russian Federation has to attack our country, the better it is for us… And what happened to it, time will tell.”

The homegrown Ukrainian R-360 Neptune anti-ship cruise missile(s) supposedly used to attack the Moskva reportedly entered service with the Ukrainian Navy in March of 2021. However, it hasn’t been entirely clear that the anti-ship missiles are operational.

Aside from the claimed attack on the Moskva, there haven’t been any other reports of Ukraine using Neptune missiles to fend off Russia’s nearly two-month ongoing invasion.

In the weeks leading up to the Moskva’s sinking, President Zelensky had been desperately asking NATO and Western allies to help provide anti-ship missiles to help Ukraine defend itself from a possible amphibious assault on its final remaining port city of Odesa.

A week before the Moskva’s sinking, it was reported that the U.S. and allies were working to provide Ukraine with anti-ship missiles without going into any specifics. Just two days before the Russian warship met its demise, Prime Minister Boris Johnson said the United Kingdom planned to send anti-ship missiles to Ukraine.

Perhaps, one reason for Ukraine being fairly tight-lipped is because, rather than Neptune anti-ship missiles, it was actually Western-provided weapon systems that helped take out the Moskva.

Ultimately, the only thing not in debate is that the flagship of Russia’s Black Sea Fleet now rests at the bottom of the Black Sea.

The Fate of Moskva’s Crew

When Tass’ initially reported a fire on the Moskva, the Russian state-run media outlet said, “The entire crew was evacuated.” Tass later edited the article removing the word “entire.” However, the Kremlin hasn’t provided any clarifying information on the fate of the 510 sailors assigned to Moskva.

Some unconfirmed reports have suggested a majority of the Moskva’s crew may have gone down with the ship.

According to The Guardian, at approximately 2am, a Turkish ship had managed to rescue 54 sailors from the stricken ship, and that “stormy weather” had prevented Russian vessels from evacuating the majority of the crew. Another unconfirmed Ukrainian report said 14 sailors had been taken to the Crimean port of Sevastopol, with the fate of the other 494 crewmembers still unknown.

On Telegram, Ukrainian interior ministry adviser, Anton Gerashchenko, claimed the Moskva’s Captain, Anton Kuprin, had been killed during the explosion and fire on the ship.

Adding to the confusion of the crew’s fate, on Saturday, April 16, the Russian Ministry of Defense published a video showing the Commander-in-Chief of the Navy Admiral Nikolay Evmenov and the command of the Black Sea Fleet supposedly meeting with the surviving crew of the Moskva in Sevastopol.

In the 26-second video, the surviving crew is shown at varying angles, making it difficult to tell just how many sailors were standing at attention on the parade grounds of a Russian naval facility in Sevastopol.

Using geolocation of the site, naval historian, OSINT analyst, and author H.I. Sutten estimated that approximately 240 sailors were on the parade field or just under half of the Moskav’s original crew.

In a separate analysis, The Debrief came to a lower figure, estimating roughly 99-110 officers and enlisted sailors were shown in the video.

Based on the limited information, it’s impossible to know how many sailors may have been injured or lost when the Moskva went down. However, by varying estimates, roughly 270-412 of the cruiser’s original crew do not seem to appear in the video.

Surprisingly, who is seen is the Moskva’s Captain Anton Kuprin, dispelling previous claims that he had been killed during a missile strike on the ship.

Some have claimed the video shared by the Russian MoD could have been filmed before the Moskva’s sinking and was being used by the Kremlin to obscure the actual number of sailors lost. The Debrief, however, hasn’t seen any remarkable evidence to suggest the video is fake or was previously filmed.

During Saturday night’s “60 Minutes” with Olga Skabeyeva, Vladimir Bortko, a film director and former member of the Duma, angrily waved his fist while shouting that the attack on Russian soil and the Moskva was “Casus belli” and “an absolute cause for war, for real and no fooling around with any ‘special military operation.'”

“Russia’s ‘special operation’ in Ukraine has now turned into what can easily be called World War 3,” added a pleased Skabeyeva, perhaps one of Russian media’s most recognizable faces, dubbed the “Iron Doll of Putin TV.”

Another well-known Russian firebrand, Vladimir Solovyev, was likewise outraged at the Moskva’s sinking on his Saturday night show. Intriguingly, some of Solovyev’s angst seemed to be directed at the Russian military.

“If the ship caught fire before sinking, as the Russians claim, then why did it not have a system to extinguish such blazes?” asked Solovyev. “If the ship was sunk by two Ukrainian-made Neptune missiles, as Ukrainian and unidentified U.S. Defense Department officials have claimed, then why did it lack an antimissile system?”

“Just explain to me how you managed to lose it,” Solovyev asked.

Ultimately, it is doubtful that the missile cruiser’s loss will significantly impact the course of the war.

Symbolically, however, the sinking of the Moskva, the flagship of the Black Sea Fleet, is a crushing blow to Russian military pride, leaving yet another embarrassing scar on Russia’s invasion of Ukraine.