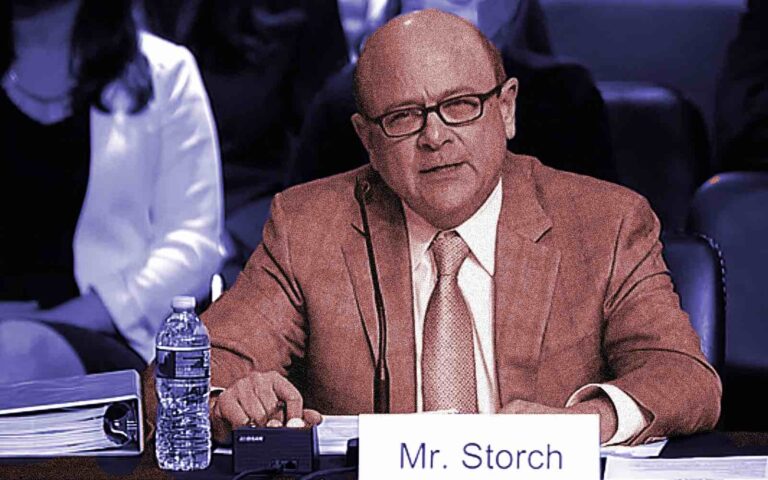 Robert P. Storch, President Biden’s nominee for Inspector General of the Department of Defense (DoD), stated during a Senate hearing Tuesday that if confirmed, he will follow through with current efforts involving the “comprehensive assessment” of unidentified aerial phenomena (UAP). However, he admitted to being currently unfamiliar with the issue.

The statements were made as the United States Senate Committee on Armed Services convened to consider Storch’s pending nomination to the Department of Defense, along with other nominees for positions within the DoD and the Department of the Air Force.

“I am truly humbled to have been nominated to lead the team at DoD OIG,” Storch said during his opening statement, “and believe that I am well-positioned to do so.”

As the Committee members presented questions to the nominees, U.S. Senator Kirsten Gillibrand (D-NY) asked Storch about his awareness of the DoD’s “ongoing assessment of the response from DoD components to the intrusions of unidentified aerial phenomenon into controlled DoD airspace, as well as UAP activity around naval and air operations,” and whether he felt the NSA had been responsive to the DoD’s current inquiries.

“I’m afraid that’s not an issue with which I am currently familiar,” Storch told Gillibrand, adding that “if confirmed, I certainly am willing to look into that and take any action that’s appropriate.”

Gillibrand further pressed Storch about his “commitment to sustain this comprehensive assessment until it reaches its appropriate conclusion,” also asking whether audits and other actions may be taken “if the assessment recommends as much,” to which Storch responded similarly.

“As is typical I think across the IG community, when a new IG comes in if there are pending matters those would continue in the office, and it would be perfectly appropriate to examine them,” Storch told Gillibrand.

Gillibrand then asked Storch to “please familiarize yourself with this issue,” further requesting that he “respond to both of those questions in writing before your confirmation please.”

Storch, who appeared to be mildly taken off guard by the Senator’s pointed remarks, agreed to Gillibrand’s requests.

Last November, The White House announced that President Biden would nominate Storch to serve as Inspector General (IG) of the Department of Defense. Storch currently serves in the position of IG for the National Security Agency/Central Security Service, a position he has held since January 2018.

Earlier in May of last year, the DoD Office of the Inspector General announced it would be launching a formal evaluation into the Pentagon’s actions related to unidentified aerial phenomena. The announcement was first reported by The Debrief.

On November 4, 2021, Senator Gillibrand filed a proposed amendment to the Fiscal Year 2022 National Defense Authorization Act (NDAA, H.R. 4350) which called for a new permanent office within the DoD to investigate ongoing observations of unidentified aerial objects by U.S. personnel during training exercises and other military activities. A version of the amendment with minor revisions, cosponsored by Senators Marco Rubio (R-FL), Martin Heinrich (D-NM), Roy Blunt (R-MO), and Lindsey Graham (R-SC), later passed with a Senate vote of 88-11, and was thereafter signed into law by President Joe Biden in late December.

However, prior to the Senate passing its version of the NDAA, the Pentagon quietly announced its establishment of the Airborne Object Identification and Management Synchronization Group (AOIMSG), as stated in an official release on November 23, 2021.

With its stated mission to “detect, identify and attribute objects of interests in Special Use Airspace (SUA), and to assess and mitigate any associated threats to safety of flight and national security,” some expressed concerns that the AIOMSG’s focus exclusively on Special Use Airspace would be too narrow.

“While we appreciate DoD’s attention to the issue, the AOIMSG doesn’t go nearly far enough to help us better understand the data we are gathering on UAPs,” Lizzie Landau, Press Secretary at the Office of Senator Gillibrand, told The Debrief in an email, adding that Gillibrand’s legislation would do “much more to address the UAP issue while also maintaining public oversight.”

Since early 2016, there has been no IG for the DoD formally confirmed by the Senate, leaving the vacant position to have been temporarily filled by Glenn A. Fine. Following his demotion by then-President Donald Trump in April 2020—a move that aimed to block him from being appointed to lead a committee to investigate funding allocation for COVID-19 pandemic response—Fine resigned from the position in June 2020.

If confirmed, Storch will become the first to officially fill the position in more than half a decade. Although incursions into U.S. airspace by unidentified aerial phenomena will apparently be a new addition to his portfolio if confirmed as IG for the DoD, Storch did appear to be committed to looking into the problem.

“If I am confirmed,” Storch told Gillibrand during Tuesday’s exchange, “I can assure you that anything that’s pending in the office, I’ll give my best attention to.”

“And if there’s appropriate follow-up to be done, we’ll do it.”