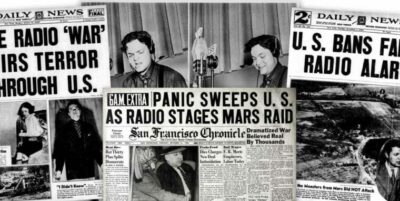 As humanity plans to visit and eventually attempt to colonize Mars, the Red Planet has long been embedded in our pop culture. From Marvin the Martian in “Looney Tunes” to movies like “Mars Attacks!,” there have been countless Mars representations. However, nothing burned “Mars mania” into our popular culture like the 1938 Orson Welles live radio broadcast of H.G. Wells’ famous science fiction work, “The War of the Worlds.”

Mars took hold of the American psyche when radio listeners believed the Martians had launched an invasion force to destroy Earth.

BACKGROUND: “The War of the Worlds” and Orson Welles

“The War Of The Worlds” was one of the first great science fiction invasion angles of its kind and spawned a genre of alien-attacks-type tales. The plot is simple; Martians invade London, and total war ensues between humanity and the space invaders trying to enslave them. The invasion aspect has been interpreted and dissected as representing the British imperialism of the era. Thematically, the novel also covers tropes of Darwinism, religion, colonialism, and science.

The original literary work has taken many forms since its publication in 1898. While there have been countless spinoffs, the most notable was the 1938 radio broadcast by Orson Welles, which adapted the story to mirror real-life news broadcasts. The hour-long program convinced many listeners that a real Martian invasion was happening, and mass panic ensued. The size of the hysteria has been disputed, but the broadcast still holds its place in history.

Welles likely had no idea that what transpired on the eve of Halloween in 1938 would make his broadcast one of the most controversial moments in radio history.

Welles’ “Mercury Theatre on the Air” was a regular program on CBS. He wanted to try something different from a “paint-by-numbers” literature to radio adaptation for his latest episode.

Using “The War Of Worlds” as a base, Welles decided to tell the story through breaking news bulletins that sounded like an actual broadcast of an alien invasion in New Jersey. Welles blurred the lines between reality and science fiction, hoping to tell a compelling story.

The script went through many revisions, and the atmosphere with the cast, Welles, and production was cited as being “chaotic” and required the station’s legal team to review it. Welles was able to keenly find loopholes around legalities and objections from the network to make the broadcast feel real.

Instead of having a voiceover actor play the president, Welles cast Kenneth Delmar as Secretary of the Interior, who sounded like Franklin D. Roosevelt. That slight trickery was just enough to put the idea in the head of listeners that a real authority figure was on the air warning about the terrors of Mars.

Welles explained in a next-day news conference that he never intended to deceive his audience. A momentary public relations crisis for CBS eventually turned into a successful Hollywood career for Welles that included the classic “Citizen Kane.”

Welles’ expert storytelling aired during a prime-time slot. As listeners tuned in that evening at 8 p.m. (Eastern), they heard a fictional weather report that slowly transitioned into the reporting of a “meteor” crash that ended up being Martians with heat-ray weaponry. From there, listeners heard the following:

“Good heavens, something’s wriggling out of the shadow like a gray snake. Now here’s another and another one and another one. They look like tentacles to me … I can see the thing’s body now. It’s large, large as a bear. It glistens like wet leather. But that face, it… it … ladies and gentlemen, it’s indescribable. I can hardly force myself to keep looking at it, it’s so awful. The eyes are black and gleam like a serpent. The mouth is kind of V-shaped with saliva dripping from its rimless lips that seem to quiver and pulsate.”

As the audience listened in terror, their first impressions of Martians weren’t friendly beings that came in peace but monsters with malice in mind. The “alien threat” element has become a standard sci-fi trope repeated through various big-budget Hollywood films since the 1938 broadcast. Mars, in popular culture, became a home of monstrous Martians hell-bent on invading the Earth.

Through the performances of the cast, real-life sound effects, and a faux news broadcast format, Welles slickly succeeded in doing something different than what he usually produced. Moreover, he introduced the alluring danger of Mars to the public. It went from a humble planet in our solar system to a place of mystery and peril.

and Steven Spielberg’s 2015 remake of “War of the Worlds.” Even the American punk rock band Misfits have a song dedicated to the creatures entitled “I Turned Into A Martian.”

Today, Mars has become the next planetary frontier for exploration and colonization. Orson Welles accomplished two things in 1938; making radio history by inciting real terror in his audience and focusing our collective imaginations on Mars.

OUTLOOK: Mars Mania and Our Sense of Wonder

In retrospect, the anxiety the broadcast caused aside, “The War Of The Worlds” also put the spotlight on what the planet Mars could potentially be for Earthlings in the future.

“The War Of The Worlds” really spawned a sense of wonder around Mars that we can see today. Elon Musk, the United Arab Emirates, China, NASA, and every other aerospace superpower have set their sights on the fourth-planet from the Sun.