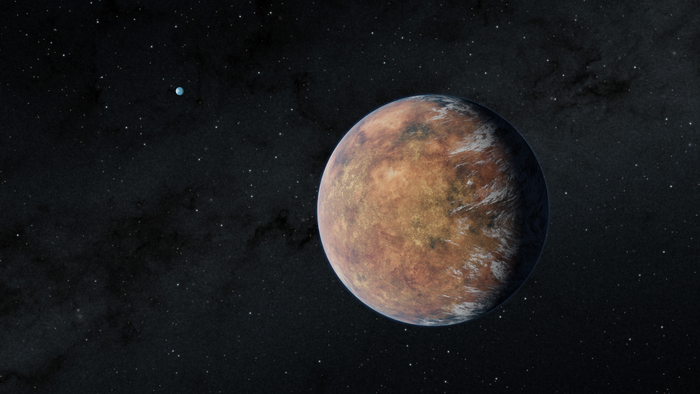 A rocky exoplanet almost the exact same size as the Earth has been discovered orbiting within its star’s habitable zone. Discovered by NASA’s Transiting Exoplanet Survey Satellite (TESS), the Earth-sized alien world is perfectly placed to potentially host extraterrestrial life.

Not Just Another Habitable Zone Exoplanet

As the race to find life in the galaxy, scientists have become increasingly adept at locating planets outside of our solar system. At last count, there were over 5,000 confirmed exoplanets, with an increasing number of those discoveries residing in their host star’s habitable zone. For those new to the conversation, the habitable zone is the distance at which an exoplanet would be just the right temperature to support liquid water on its surface.

Sure, many armchair astronomers and astrobiologists will be quick to remind you that life does not necessarily need water to exist. Still, just about every type of life we know about here on Earth uses water in some way to survive, so until those looking for E.T. know better, planets with the potential to harbor liquid water are a good place to start that hunt. We also don’t know if any alien life can or will exist in gas giants like Jupiter or Saturn. Still, the laws of physics (as we know them) imply that life would have a particularly hard time existing in such hostile environments.

And that’s what makes this latest discovery so exciting. Not only is the planet (dubbed TOI 700 e because it orbits the M dwarf star TOI 700) in the habitable zone of its host star, but it is a rocky (not gaseous) world and is almost exactly the same size as Earth.

Even better yet, the newly discovered planet, which is about 100 light years away, is one of at least three other planets within the same system. And another of those, TOI 700 b, is also more or less Earth-sized (about 90% Earth’s mass), meaning that given the right conditions, TOI 700 e could actually be part of a planetary system that has extraterrestrial life in more than one place.

“This is one of only a few systems with multiple, small, habitable-zone planets that we know of,” explained Emily Gilbert, a postdoctoral fellow at NASA’s Jet Propulsion Laboratory in Southern California who led the discovery of TOI 700 e. “That makes the TOI 700 system an exciting prospect for additional follow-up.”

The researchers also note that the newly discovered planet didn’t show up on their initial search of the star system when the other three planets were found, but instead required a whole extra year of measurements and data analysis to discover it was there.

“If the star was a little closer or the planet a little bigger, we might have been able to spot TOI 700 e in the first year of TESS data,” explained Ben Hord, a doctoral candidate at the University of Maryland, College Park and a graduate researcher at NASA’s Goddard Space Flight Center. “But the signal was so faint that we needed the additional year of transit observations to identify it.”

While humanity waits for researchers to use the newly orbited James Webb Space Telescope to look for signs of extraterrestrial life in the atmospheres of previously discovered habitable zone exoplanets like those in the Trapppist-1 star system, this latest discovery shows that the list of viable places to hunt for E.T is likely only going to continue to grow.

“TESS just completed its second year of northern sky observations,” said Allison Youngblood, a research astrophysicist and the TESS deputy project scientist at Goddard. “We’re looking forward to the other exciting discoveries hidden in the mission’s treasure trove of data.”