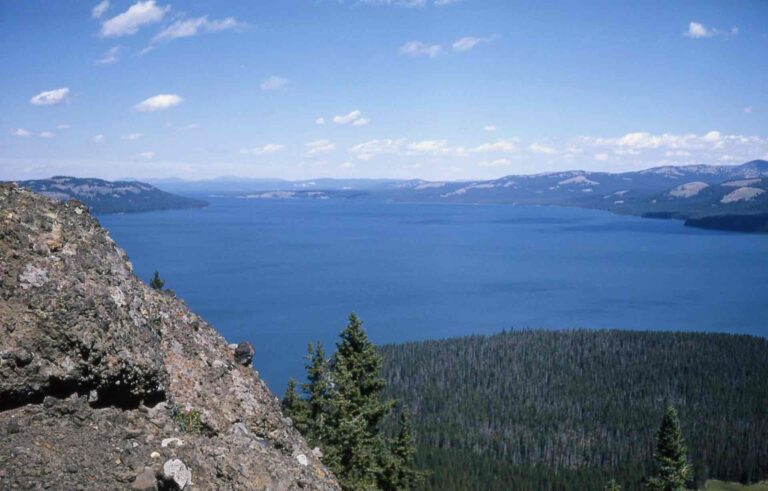 July was a busy month for Yellowstone National Park, especially in terms of seismic activity, with more than 1000 earthquakes logged on park property by the United States Geological Survey.

The record occurrence of earthquakes at America’s oldest national park has raised concerns for some parkgoers, who worry about whether the seismic activity seen in recent days might be related to potential volcanic activity in the region.

However, according to USGS data, July is by no means the most active month that Yellowstone has seen as far as earthquake activity, nor have the recent tremors changed current volcano alert levels.

Yellowstone is the site of a volcanic caldera occasionally referred to as the Yellowstone Supervolcano, which was formed during an eruption that occurred nearly 630,000 years ago. While concerns remain about the potential for future eruptions, the most recent evidence for lava flows within the caldera date back to around 70,000 years ago.

So if not volcanic activity, what caused all of the earthquakes that have occurred this summer?

“Yes, there were a lot of earthquakes, but they’re related to motion on preexisting faults,” said Yellowstone Volcano Observatory scientist-in-charge Mike Poland in a recent USGS update. Poland adds that the activity along these faults had likely been influenced by groundwater increasing pressure due to increasing snow melt.

USGS data indicates that there were several earthquake swarms in July, concentrated in seven distinct areas of the park. The largest of these, centered below Yellowstone Lake, produced a total of 764 of the more than 1000 quakes logged during July 2021. The largest of the quakes recorded by the USGS had been a Magnitude 3.6.

“The earthquake swarms are not caused by magma,” read a USGS statement. “One of the things we look at to see if magma was involved,” the statement added, “is changes in ground deformation.”

“We haven’t seen any changes in ground deformation during the month of July that has been outside multi-year trends,” the USGS said.

Interestingly, the location of the largest July quake storm at Yellowstone this year boasts a unique history of strange sounds which park goers have reported around Yellowstone Lake since the late 1800s. The earliest written account which documents this phenomenon was recorded in 1895 by engineer Hiram Chittenden in his book The Yellowstone National Park: Historical and Descriptive.

“A most singular and interesting acoustic phenomenon of this region, although rarely noticed by tourists, is the occurrence of strange and indefinable overhead sounds,” Chittenden wrote. “They have long been noted by explorers, but only in the vicinity of Shoshone and Yellowstone Lakes.”

“They seem to occur in the morning,” Chittenden added, “and to last for only a moment.” The sounds, according to those who heard them, were often likened to “the ringing of telegraph wires or the humming of a swarm of bees.”

“In other lands and times [the noise] would have been an object of superstitious reverence or dread, and would have found a permanent place in the traditions of the people,” Chittenden wrote.

“No rational explanation has ever been advanced for this remarkable phenomenon,” he said.

Although Chittenden had been the first to document the peculiar phenomena heard around Yellowstone’s lakes, one of the earliest reported observations of the peculiar noise occurred more than two decades earlier when geologist Frank H. Bradley, one of the members of the Hayden Geological Survey of 1871, reported hearing “every few moments a curious sound, between a whistle and a horse whine.”

Bradley later wrote of his observations and resolved that the noise had been “gusts of wind were passing through the air above us.” This, despite the fact that “the pines did not as yet indicate the least motion in the lower atmosphere.”

Could the unusual sound reported by Bradley, Chittenden, and dozens of other visitors to Yellowstone throughout the ensuing decades have been related to seismic activity occurring along faults beneath park property? Although this remains to be determined, the latest data collected by the USGS about recent earthquake swarms in the park would appear to strengthen the case for this theory seismic theory behind the origin of one of the park’s most enduring mysteries.