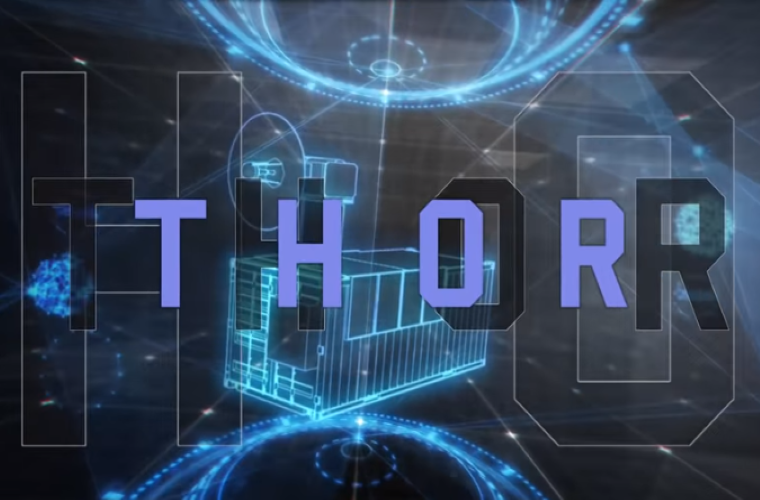 The United States Air Force is building a working prototype of its anti-drone weapon system known as THOR’s hammer. Dubbed Mjölnir for the actual hammer wielded by the Norse god of thunder, the weapon system could represent a game-changer against the increasing use of unpiloted drones in battle.

Few, if any, weapons offer the favorable nexus of cost and destructive power than the drone. Worldwide military forces increasingly employ drones in land and sea combat situations, often with deadly effectiveness.

The Debrief previously reported on the U.S. Navy’s goals of unmanning the front lines, including a new, autonomous sail drone and replacing them with combat drones. The Navy also recently tested a drone-killing laser that successfully blasted an incoming target from the water.

Airborne drone threats are even more common, leading the Pentagon to release an official counter-drone strategy last year. The Debrief followed up on those efforts last May, reporting on the “Top 7 Drone Killers Currently in Development.”

Some of these drone killing platforms have since been tested, while others (think lasers on fighter jets) remain in earlier stages of development. However, one of the most technologically impressive anti-drone approaches highlighted in that story was a microwave weapon known simply as THOR.

Now, the Air Force has announced it is taking THOR to the next level by committing $26 million to build a working prototype named after the god’s mystical hammer.

“Winner of the What’s New in Defense 2021 award, THOR is a counter-swarm electromagnetic weapon the Air Force Research Laboratory (AFRL) developed for defense of airbases,” reads the AFRL’s project home page. “The system provides non-kinetic defeat of multiple targets. It operates from a wall plug and uses energy to disable drones.”

Thus far, the Air Force has spent $15 million to design and perfect THOR. Those efforts have paid off, leading to the next step; building THOR’s hammer, Mjölnir.

“Because THOR was so successful, we wanted to keep the new system’s name in the family,” said Adrian Lucero, THOR program manager from AFRL’s directed energy directorate at Kirtland Air Force Base in New Mexico. “Mjölnir will focus on creating a detailed blueprint for all future [counter-unmanned aerial system high-power microwave] systems with enhanced range and technology for detecting and tracking” drones.

That means the ability to protect an entire airbase from aerial drones by zapping them out of the sky before they can breach the perimeter.

“The system uses high power microwaves to cause a counter electronic effect,” the AFRL project page explains. “A target is identified, the silent weapon discharges in a nanosecond and the impact is instantaneous.”

These technologies were already proven with THOR, but as a working prototype, THOR’s hammer will take the entire project to the next level. “Mjölnir will have increased range, reliability, and manufacturing readiness to defeat drones with a mighty radio frequency hammer pulse,” the summary explains.

The Air Force hasn’t provided a firm date for real-world combat deployment of Mjölnir, but they expect the contractor Leidos to deliver the newly ordered prototype sometime in 2023. A possible test deployment may occur the following year as part of a more extensive integrated anti-drone system.

“They intend to procure enough systems for a platoon unit in 2024 to do experimentation with a mix of weapons,” the AFRL’s Directed Energy Directorate head Kelly Hammett told the Albuquerque Journal last year. “They will put microwaves and lasers together in a single unit to assess how to deploy it all.”