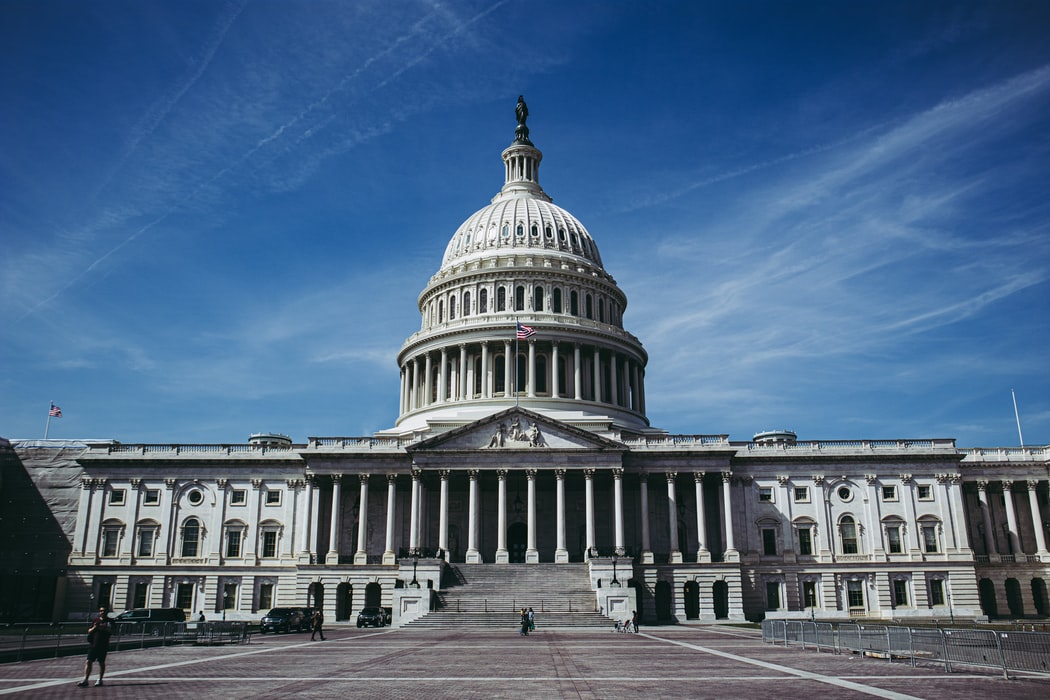 Welcome to this week’s installment of The Intelligence Brief… following the big news this week involving Congressional hearings regarding the timely topic of unidentified aerial phenomena, we’ll be looking at 1) a quick overview of key areas of focus during the hearings, as well as several things that stood out to us that include 2) where UAP sightings are being stored by the DOD, 2) whether the current UAP office will be getting a makeover in the days ahead, 3) which military encounters seem to point to something truly unexplained, and 4) how a controversial memo came up during the hearings.

“UAPs are unexplained. It’s true, but they are real. They need to be investigated.”

Before we dive into our analysis of the big takeaways from Tuesday’s hearings, be sure to check out our live blogging during the hearings (furiously hammered out almost in real-time by yours truly as the hearing unfolded). Also, if you’d like a second look at what members of Congress and military witnesses had to say, have a look at the complete transcript we’ve made available on our site, where you can also find the archived video of the hearing.

Speaking of videos, if you’d like a closer look at one of the two examples of alleged UAP that were shown during the hearings, head on over to The Debrief’s YouTube Channel where you can find that here, along with recent interviews like the one our very own Chrissy Newton did with engineer and futurist Harold “Sonny” White.

That said, it’s time to have a look at the main themes, key takeaway, and big surprises that came up during Tuesday’s historic House Panel hearing.

Tuesday’s Hearings on UAP: Technology, Transparency, and the DOD’s AOIMSG

Tuesday morning, an eagerly awaited House Panel hearing was held in Washington to address the Department of Defense and its involvement with investigations of unidentified aerial phenomena, more commonly known as UFOs.

The actual primary focus of Tuesday morning’s session, held by the Subcommittee on Counterterrorism, Counterintelligence, and Counterproliferation of the House Permanent Select Committee on Intelligence and overseen by Rep. Andre Carson (D-IN), dealt with the Pentagon’s new Airborne Object Identification Management and Synchronization Group (AOIMSG).

“Unidentified aerial phenomena are a national security threat,” Carson said as the hearing began. “UAPs are unexplained. It’s true, but they are real,” Carson added, noting that they also “need to be investigated.”

“UAP reports have been around for decades,” said Rep. Adam Schiff (D-CA). “And yet we haven’t had an orderly way for them to be reported and investigated.”

“That needs to change,” Schiff said. “Excessive secrecy only leads to mistrust and speculation.”

Appearing as witnesses during the session were Under Secretary of Defense for Intelligence & Security Ronald S. Moultrie and Deputy Director of Naval Intelligence Scott W. Bray, who appeared to echo Schiff’s desire to see transparency on the UAP issue. “The Department is fully committed to the process of openness and transparency to the American people,” Moultrie said later in the hearing.

Along with its focuses on the DOD’s AOIMSG and the issue of transparency, technologies in use by the U.S. military and the intelligence community were also a frequently revisited topic, although there were obvious limitations to how much could be said during the open portion of the hearings. As Moultrie also commented at one point, while being committed to transparency the DOD is “are also mindful of our obligation to protect sensitive sources and methods.”

So What Did We Learn From Tuesday’s Hearings?

Here at The Debrief, we were busy live blogging the entire event, after which we made a complete transcript available on our website, along with video samples shown during the hearing. This, in addition to featuring additional commentary from some of our excellent contributors like Professor Avi Loeb, with their perspectives on the hearings and what they mean going forward.

That said, there were several interesting things that came up during the hearing that caught our attention. From statements about how reports of unidentified aerial phenomena are collected, and where they go afterward, to questions about an infamous memorandum allegedly involving the shadowy world of black programs, and one of the most widely-discussed UAP incidents of modern times, Tuesday’s hearings certainly provided some good talking points for discussion (and maybe even fodder for a few future FOIA requests).

Here are a few of the things that stood out to us during the hearing, and the main takeaways in terms of what it tells us about the current efforts of the UAP Task Force as its work carries over to its successor, the DOD’s Airborne Object Identification Management and Synchronization Group (AOIMSG).

During the hearings, Deputy Director of Naval Intelligence Scott W. Bray spoke about the efforts that have continued since the establishment of the U.S. Navy’s UAP Task Force, as well as the growing body of reports it has collected.

“As detailed in the ODNI report,” Bray told Congressmen during the hearing “if and when individual UAP incidents are resolved, they likely fall into one of five potential explanatory categories airborne clutter, natural atmospheric phenomena, US government or US industry developmental programs, or an adversary system, or an ‘other’ bin that allows for a holding bin of difficult cases, and for the possibility of surprise and potential scientific discovery.”

“We stand by those initial results,” Bray added, noting that “Since the release of that preliminary report UAP Task Force database has now grown to contain approximately 400 reports, the stigma has been reduced.”

Wait… did he say database? Although this isn’t particularly surprising, it is noteworthy that there were references to what appears to be an official government database of reports, containing several hundred examples of what the DOD currently classifies as UAP. Add to this the fact that the majority of these reports appear to have been collected since the Navy adopted its updated reporting procedure in 2019, and what it provides is a pretty good idea in terms of the frequency of military encounters with UAP.

2) The AOIMSG Will Likely Soon Get a New Name

At another point in the hearing, Under Secretary of Defense for Intelligence & Security Ronald S. Moultrie spoke about the newly designated AOIMSG, and dropped a hint that the program’s current grandiloquent name will likely be changed.

“As you have stated, we have been assigned that task to actually stand up an office, the AOIMSG, which I believe the name… will likely change,” Moultrie said.

This comes with a collective sigh of relief from proponents of UAP research, who have struggled since November to even remember the name of the program (which Moultrie, Bray, and others during the hearing also referred to phonetically as the “Aim-Sog”).

“We have moved forward in terms of moving to establish that office,” Moultrie added, also noting that “we have, as of this week, picked the director for that effort, a very established and, and accomplished individual.”

Although the forthcoming director of the AOIMSG has yet to be publicly named, information provided to Douglas Johnson in recent days by his contacts in Washington may offer a clue as to who the likely director will be, although Johnson notes that until this is confirmed, “if I miss the mark, your money back, no questions asked.”

3) The Nimitz Incident is Still Unexplained

Later in the hearing, Rep. Rick Crawford (R- AK) asked whether there were any specific examples “an object that can’t be explained as having been human-made or natural?”

Although no data currently in the possession of the UAP Task Force conclusively points to technologies or other objects of unknown provenance, Bray pointed to one of the most widely discussed UAP incidents in modern times as what is, arguably, one of the best examples of what he calls an “unresolved” case.

“The example that I would say that that is still unresolved,” Bray told Crawford, “that I think everyone understands quite well as the 2004 incident from Nimitz.”

“We have data on that, and that simply remains unresolved.”

Bray also clarified that just because the incident is unresolved “Doesn’t mean it resolves to being something… that is difficult to explain.”

“I can’t point to something that definitively was not man-made,” Bray concluded, “but I can point to a number of examples which remain unresolved.”

4) The Infamous “Wilson Memo” Went on the Record

During another portion of the hearings, Rep. Mike Gallagher (R-WI) presented a series of questions to Moultrie that have garnered significant attention in the days since the event. In addition to asking about a 1967 event at Malmstrom Air Force Base, Gallagher asked Moultrie about his knowledge of the infamous “Wilson Memo,” a purportedly leaked transcript of a conversation between Admiral Thomas Wilson and physicist Eric Davis.

“Are you aware of a document that appeared around 2019, sometimes called the Admiral Wilson memo, or ‘EW notes’ memo?” Gallagher asked.

“I am not,” Moultrie said. “I’m not personally aware of that.”

“This is a document in which again, I’m not commenting on the veracity,” Gallagher said. “I was hoping you would help me with that, in which the former head of DIA claims to have had a conversation with the doctor. [Eric Davis] claims to have sort of been made aware of certain contractors or DOD programs that he tried to get full access to and was denied access to.”

“So you’re not aware of that?” Gallagher probed.

“I’m not aware of that Congressman,” Moultrie maintained.

Longtime UFO commentator Billy Cox, who interviewed Thomas Wilson about the purported memo back in 2019, writes that the Admiral and former DIA chief told him that “I wouldn’t know Eric Davis if he walked in right now.” Later, Wilson similarly told journalist Ross Coulthart that the memo is “fiction”. 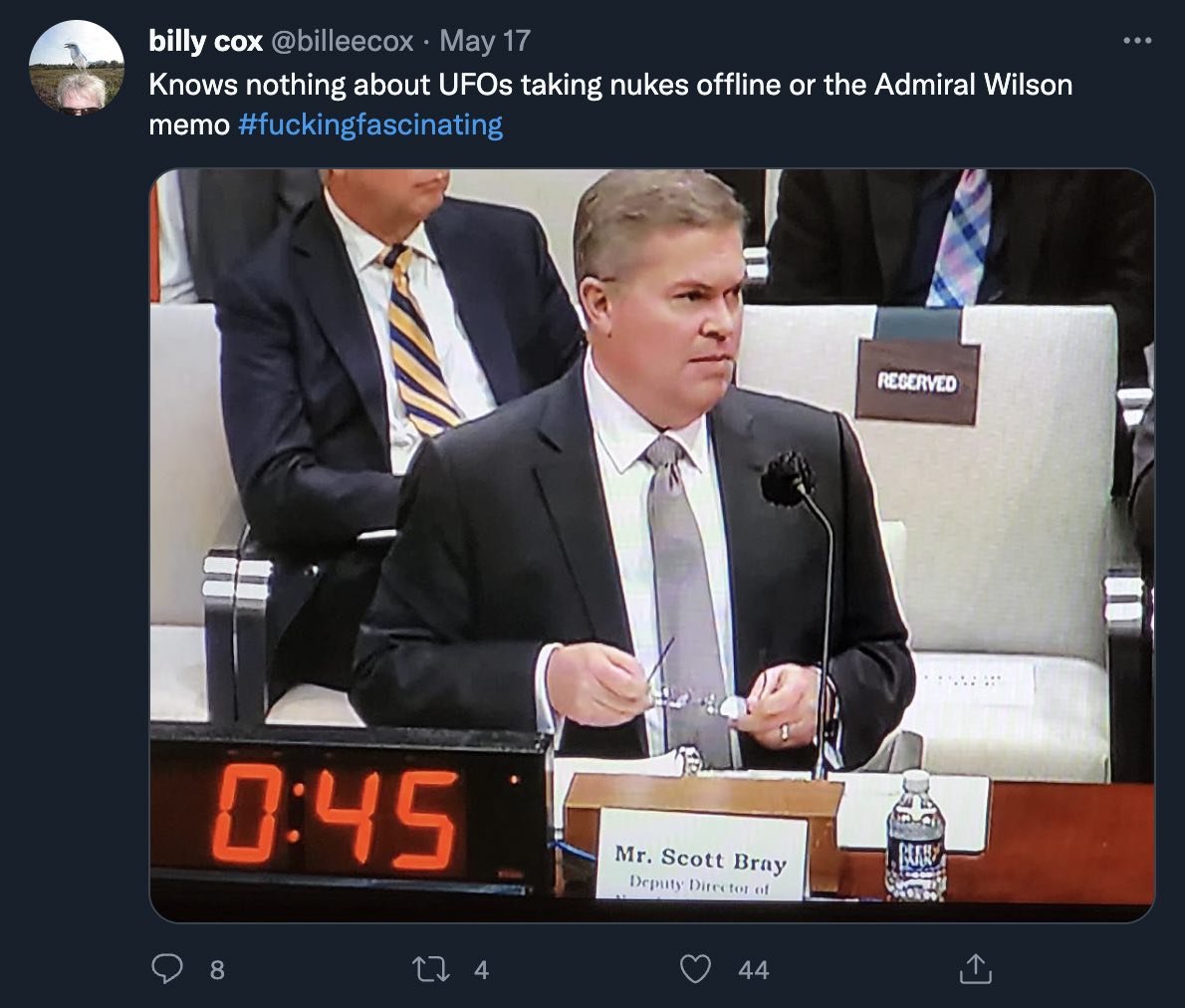 For what it’s worth, Gallagher concluded by asking for “unanimous consent to enter that memo into the record,” to which Rep. Carson responded, “Without objection.”

Tuesday’s Congressional UAP hearings may not have resulted in any groundbreaking new details on the U.S. Department of Defense and its efforts to study UAP. However, it is difficult to ignore the historic significance of what occurred on Tuesday, and its role as a key moment in the ever-developing story of U.S. government investigations into unidentified aerial objects in the 21st century. And if nothing else, some of the points outlined above will be enough to keep ever-watchful UAP proponents talking for some time to come.