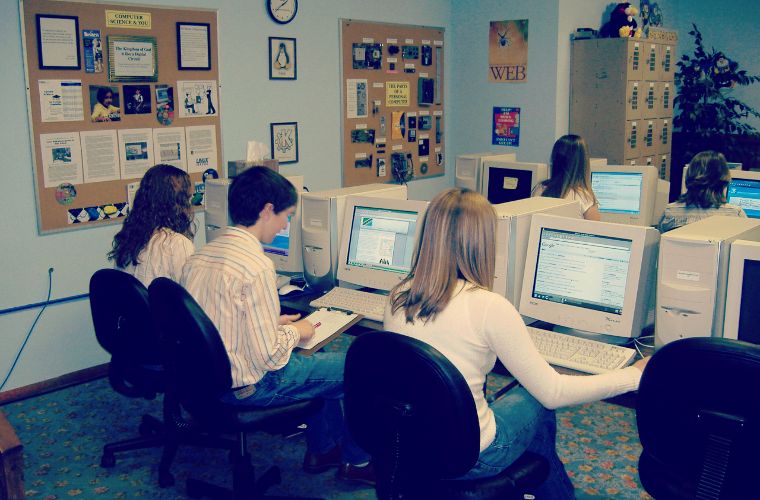 
The internet used to be the bastion of authentic creativity and self expression. This movement wants to make it suck less...

In response to today’s Internet, where user experience is mediated almost entirely by a few corporations who profit by stimulating and sustaining users’ attention, the internet is experiencing a resurgence in WebRings.

These collections of websites organized by manual navigation became obsolete after the rise of search engines in the early 2000s. Now, visitors and creators of WebRings are reviving a set of coding and design choices once thought to be defunct.

What these rebellious programmers are building goes by many names—indieweb, yesterweb, folk internet—and relies on simple design choices, often borrowing elements from the 1980s and 1990s. For some in their 30s and 40s, it’s a recreation of an Internet experience they encountered as teenagers traversing bulletin boards and peeking into small, tightly knit online communities.

For younger users who came of age alongside Facebook and Google, WebRings are a space for a different type of Internet they frequently hear about but barely missed. For more and more computer engineers frustrated and alienated by today’s web, the point is to show what a different internet could look like by building it themselves.

Users and creators say with confidence that WebRings have increased in the past few years, though it’s tough to the scope of their popularity. WebRings (and the folk internet at large) are decentralized and loosely connected by definition. Neocities, a non-profit free website development platform preferred by many indie creators for its simplicity and the control it gives web developers, is hosting nearly 400,000 sites. Neocities’ stated goal reflects the sentiment of many interested in building a different Internet: “To rebuild the web we lost to automation and monotony, and make it fun again.”

The pursuit of something different underpins the thousands of sites and creators that make up the growing sector of the Internet. A new WebRing can pop up at any time. It just needs a founder willing to organize participants around a certain unifying principle, often related to creativity and self-expression like design, gaming, art, music, recipe-sharing, or writing. This type of autobiographical repository is sometimes known as a “Memex,” defined by Devine Lu Linvega, a significant figure on the  LowTech WebRing, as “a kind of archive and mirror of everything that one has done, that one has learnt. A living document that outlines where one has been, and a tool that advises where one could go.” Along with Linvega, figures like Russian artist and technologist Olia Lialina and her website Teleportacia tower over the field and serve as paradigmatic examples of the indieweb.

Take Linvega’s LowTech WebRing as an example. A given site connects to two other sites, which connect to two more sites, forming a closed-loop: a ring. Users tout the format as something more like wandering through a neighborhood, reinfusing cyberspace with a sense of exploration and curiosity they associate with the internet of the 90s. A WebRing’s organizing principle permeates the content on its pages. For example, the many computer engineers and tech professionals of the LowTech ring share their experiences trying to live “low-tech” lifestyles, like learning carpentry and sewing, keeping gardens, and swapping simple, healthy recipes.

A few clicks away from Linvega on the LowTech ring is Daniel Murray, a 27-year-old computer engineer in Cork, Ireland. MelonKing, Murray’s page, gives the visitor heavy doses of retro game design, journal entries, tech philosophy, and photos. Along with Murray’s two other stripped-down webpages (Momg and GifyPet) he’s clocked nearly 20 million hits. Though he’s just old enough to remember dial-up, his memories of what came before today’s Internet reflect a disillusionment shared by many who have turned to WebRings.

In the 2010s, Murray decided to study computer science because he loved, in his words, making cool things. “I spent 5 years realizing that no one else wanted to do that, they were all in it to get jobs at Google and Microsoft. We were taught the rules of good web design—make things simple, don’t have excessive stuff, make sure it fits into google’s algorithmically approved systems. [MelonKing] felt like an extreme act of rebellion.

Among those interested in a different kind of web, several specific touchpoints define the development of the Internet and where things went wrong. Tim Berners-Lee, an English computer scientist and professor regarded as the central figure in the creation of the World Wide Web comes up again and again. WebRing users cite his utopian vision of a closely connected community of users sharing information with each other, free from any central authority or control, as inspiration for what the Internet still could be. Things shifted in the early 2000s with search engines and Facebook. These ushered in the current Internet era—one defined by massive social media companies that feed on users’ data and drive traffic through the “attention economy,” in which the sole purpose of the Internet became keeping users scrolling for as long as possible. Subscribers to the indieweb consider this aberration a toxic misstep. Murray described the way the Internet changed in the late 2000s and 2010s as terminally boring, sterile, even evil.

“Somewhere in the early 2000s, we created a monster and realized we didn’t know what to do with it,” remembers Estevan Carlos Benson, an instructor at the University of Southern California whose work falls at the intersection of visual art and computer programming. As a high school student in the late 90s, Benson was part of WebRings where he shared music and art.

As a college student in Boston, Benson joined Facebook in 2004, just months after its launch.

“Facebook was an easy entry point for the general masses. They invented the idea of a feed, and people became extremely obsessed with it, addicted to it,” said Benson over the phone. The slow shift towards a corporate-mediated, profit-seeking internet experience has driven Benson back to WebRings. “More money got involved, the more people copied it. We don’t need to have these companies profit off of our data, and we need to make a decision on when we do that. We shouldn’t just automatically use these tools because we think it’s the the only way to use the Internet.”

Summer of the Saucers


In 1947, the public narrative about flying saucers began with the Kenneth Arnold sighting, deepened in mystery with the Roswell crash, saw the creation of both the Air Force and the CIA, then ended with the famous Twining Memo… and nothing has been the same since.

WebRings and the growing community around them emphasize that self-imposed technological limits have become necessary. Over the past decades, tech has invaded every aspect of our lives, and the default way of engaging with technology, specifically the Internet, is driven by primitive and destructive impulses. WebRings are a part of the larger project of reassessing and retooling society’s relationship to the daily onslaught of content, notifications, and messages.

When Murray insisted on speaking over WhatsApp or Discord,  I chalked his preference up to a concern for security and privacy. He soon told me that he tries not to carry around his smartphone at all. If he does, he only uses it on wifi—a self-imposed technological boundary. His experience with WebRings works alongside a hope for a fundamentally different relationship between humans and the Internet.

“I don’t like the idea of just doing something old for the sake of it being old. I see it as using an old style and going for a mood of something that once was, but also a way to progress into some sort of future.”

Correction: The original version of this article was in error stating that Tim Berners-Lee created the Internet. He created the World Wide Web, and the article has been updated.

Eli is a writer based in Nashville, Tennessee, focused on land use, surveillance, the fossil fuel supply chain, and the internet. Connect on Twitter @ejmotycka or eli.motycka@protonmail.com.