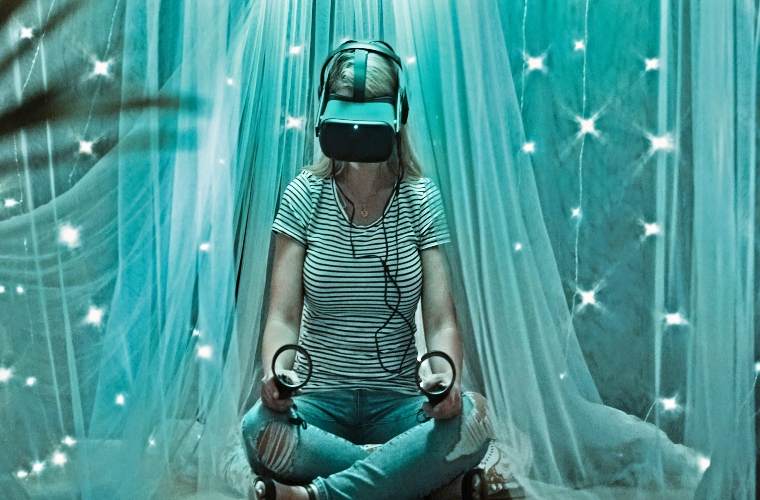 I write science-fiction thrillers for a living, set ten to twenty years in the future. Each of these is packed with accurate science, including artificial superintelligence, nanotechnology, super-soldier enhancements, quantum mechanics, cosmology, and more. In this way, I can indulge my love of science and futurism, and undertake a comprehensive examination of the impact of exciting new technologies.

But here’s the problem: I’d love to write science fiction set hundreds of years in the future. So why don’t I?

Because to do so, I’d have to turn a blind eye to everything I believe will be true in this distant age. The truth is that books about the future of humanity, such as Kurzweil’s The Singularity is Near, have ruined me.

As a kid, I read nothing but science fiction, a genre that examined individuals and societies through the lens of technological change. But for the most part, writers in past generations could feel confident that men and women would always be men and women, at least for tens of thousands of years to come. We might develop technology that would allow us to go back and forth through time, travel to other dimensions, or speed through the galaxy in great starships, but in the end, we’d still be fundamentally the same as we were in Ancient Rome, and as we are today. We would remain ambitious, ruthless, and greedy, but also selfless and heroic. We’d love, lust, scheme, and laugh, and if we lost a phaser battle with a Klingon in this far-future world, the Grim Reaper would still be waiting to collect us.

In short, we would continue to be the kind of human beings a writer could work with.

James T. Kirk might have lived hundreds of years in the future, might have beamed down to planets and engaged warp engines, but viewers still had no trouble relating to him. He was adventurous, loyal, and heroic, and he lusted after life (along with green aliens, androids, and just about anything else that could move).

But what if you believe that in a few hundred years, people will not be the same as today? What if you think they will be so different they will be unrecognizable as humans?

Now how would you write science fiction? You would have to change two variables at the same time: not only addressing dramatic advances in technology but dramatic changes in the nature of humanity itself (or, more likely, the merger of our technology and ourselves).

In the early days of science fiction, technology changed at a snail’s pace. But today, technological change is so furious, so obviously exponential, and it’s impossible to ignore. I have no doubt this is why science fiction, a once-fringe, disrespected genre, has become so widely popular and all-pervasive in our society.

In 1880, a group of experts were tasked with analyzing New York City, one of the fastest-growing cities in North America. The mayor wanted to know what it might be like in a hundred years.

The experts extrapolated the likely growth during this period, and the expected consequences, which they found to be catastrophic. If population growth wasn’t halted, by 1980, there would be so many horses in the city that every single inch of it would be knee-deep in manure. Knee-deep! In horse manure!

No expert in the world could have imagined how the automobile would save the city from this fate, such that NYC in 1980 would greatly exceed all population projections yet be remarkably free of horse manure.

As someone interested in technology and future trends, I love this story, even if it turns out to be apocryphal, because it does a brilliant job of highlighting the dangers of extrapolating the future. We’re great at projecting continuing trends, but we’re terrible at foreseeing game-changing technologies. Technologies like the electric motor, the car, the phone, the computer, the internet, and so on.

Even the most brilliant futurists among us are bound to miss any number of miracles this century is sure to bring about. And while we can’t know what our future will hold, we’ve seen too much evidence of exponential progress not to know that Jim Kirk would no longer be relatable to us. Assuming we avoid self-destruction, if we ever advance to the point at which we can travel through hyperspace and beam ourselves down to planets, we’ll be all but unrecognizable.

It is well known that computing power and speed have been growing exponentially. But exponential growth sneaks up on you in a way that isn’t intuitive. Start with a penny and double your money every day. Two cents, four cents, eight cents, and so on. How long could you continue this exercise? Not very, because in just thirty-nine days, you’d need to come up with over two billion dollars to keep going.

When exponential growth begins, it’s hardly noticeable. On the first few days of my example, you’d only be taking penny-sized steps. But a mere thirty-eight days later, you’d be taking billion-dollar steps, which I suspect would begin to attract your attention. Like a hockey stick, the graph of exponential growth barely rises from the ground for some time, but when it reaches the beginning of the handle, watch out because you suddenly get an explosive rise that is nearly vertical.

It’s becoming crystal clear that we are entering the hockey-stick phase of progress with computers and other technologies. If we don’t self-destruct, does anyone imagine that we won’t develop computers within a few hundred years that will make the most advanced supercomputers of today seem like a toddler counting on his or her fingers? Does anyone doubt that at some point, a computer will get so powerful as to be able to direct its own future evolution? And given the speed at which such change would occur, does anyone doubt that a computer could become self-aware within the next few centuries?

Visionaries like Ray Kurzweil believe this will happen well within this century. Still, even the most conservative among us must admit the likelihood that by the time the USS Enterprise pulls out of space dock, either our computers will have evolved into gods and obsoleted us, or we’ll have merged with our technology to reach almost god-like heights of intelligence ourselves.

And while this bodes well for these far-future beings, it isn’t so great for today’s science fiction writers. Because what would you rather read about: a swashbuckling starship captain? Or a being as incomprehensible to us as we are to an amoeba?

It is possible to write science fiction novels about a future in which this transformation has occurred. The problem is that, for the most part, people like reading about other people. People who are like them. People who act and think like, you know . . . people.

Even if we imagine a future society of omniscient beings, it’s hard to come up with a gripping tale without conflict, passions, frailties, and fear of death. And what kind of a story could an amoeba write about a man, anyway?

I believe that after a few hundred years of riding up this hockey-stick of explosive technological growth, humanity can forge a utopian society whose citizens are nearly omniscient and nearly immortal. A society in which unrecognizable beings live in harmony, not driven by current human limitations and motivations.

Wow. A novel about beings we can’t possibly relate to, residing on an intellectual plane of existence incomprehensible to us, without conflict or malice. I think I may have just described the most boring novel ever.

Despite what I believe to be true about the future, I have to admit something: I still can’t help myself. I love space opera. When the next Star Trek movie comes out, I’ll be the first one in line. Even though I’ll still believe that if our technology advances enough for starships, it will have advanced enough for us to have utterly transformed ourselves, as well. With apologies to Captain Kirk and his crew, Star Trek technology would never coexist with a humanity we can hope to understand, much as dinosaurs and people didn’t roam the earth at the same time. But this being said, as a reader and viewer, I find it easy to suspend disbelief. Because I really, really love this stuff.

As a writer, though, it’s more difficult for me to turn a blind eye to what I believe will be the truth.

But, hey, I’m only human, with all sorts of flaws. So maybe I can rationalize ignoring my beliefs long enough to write a rip-roaring science fiction adventure. I mean, it is fiction, right? And perhaps dinosaurs and humanity did coexist. The Flintstones wouldn’t lie, would they?

If that day ever comes, all I ask is that you not judge me too harshly.

Douglas E. Richards is the New York Times and USA Today bestselling author of more than a dozen science-fiction thrillers, including his latest, The Immortality Code. Richards earned a master’s degree in molecular biology and was a biotech executive before becoming a full-time novelist in 2011.  You can follow Douglas on Facebook.