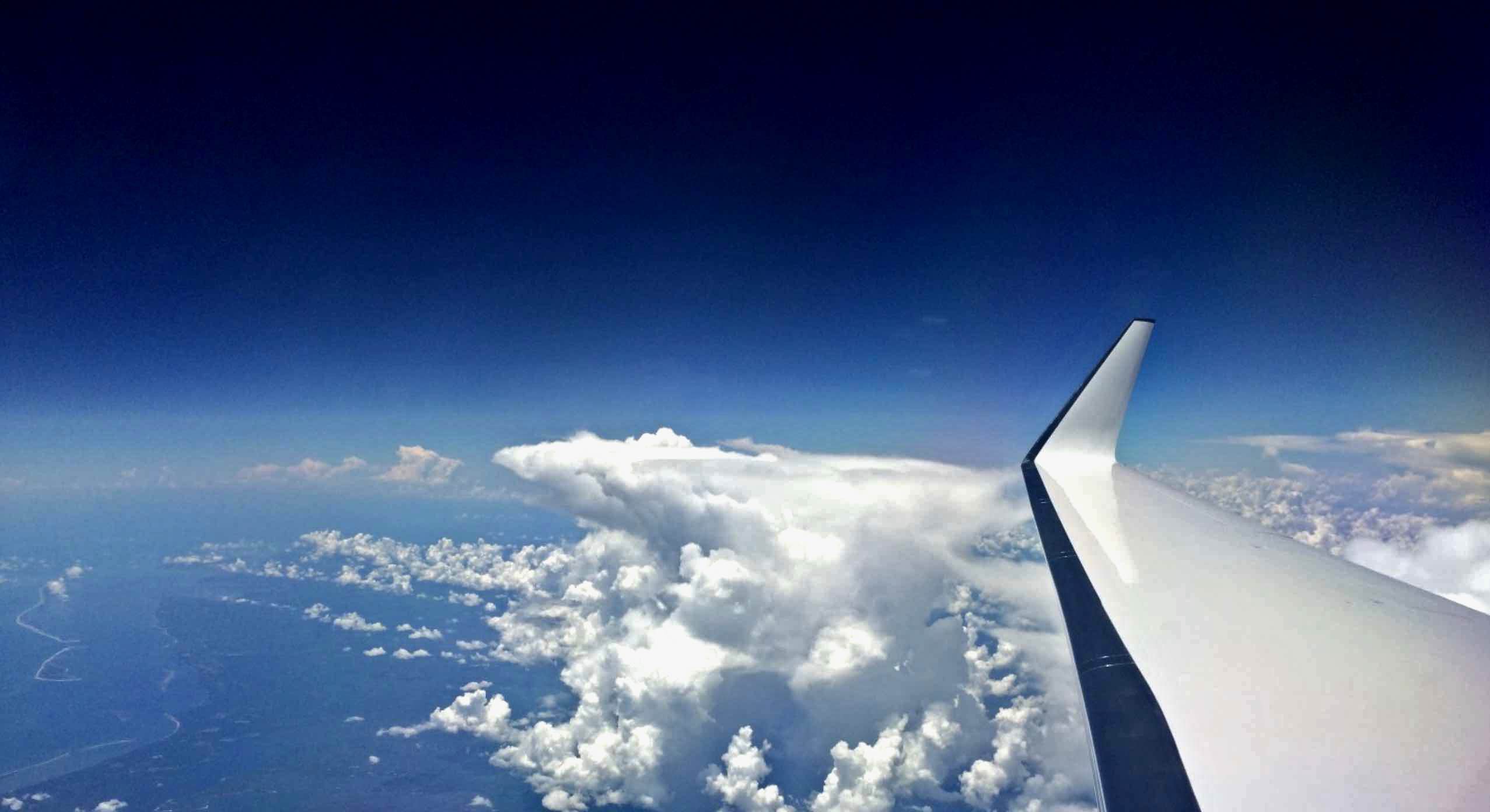 Welcome to this week’s Intelligence Brief… unidentified aerial phenomena (UAP) are back in the news again, following a rash of sightings of luminous objects by aviators and other developments in recent weeks. Therefore, this week we’ll be looking at 1) what pilots have recently reported seeing in American airspace, 2) possible interpretations of what those objects might be, and their relevance to flight safety and 3) the establishment of a new aviation community related to UAP and why that’s important.

Aviation in itself is not inherently dangerous. But to an even greater degree than the sea, it is terribly unforgiving of any carelessness, incapacity or neglect.

Before we get into the thick of things, a few of the stories we’re covering at The Debrief in recent days include Chris Plain’s analysis shows that the hypersonic ejection by Pete “Maverick” Mitchell in Top Gun: Maverick is survivable… well, kind of. Elsewhere, MJ Banias asks, “Can Elon Musk Really Be Our Hero?” After all, Starlink can be a weapon against dictators, but the question remains as to whether Elon Musk is strong enough to wield it. Finally, scientists are trying to narrow down what led certain fungi to take the unique evolutionary path that helped them produce psychedelic compounds.

Meanwhile in video news, early internet pioneer and longtime researcher of unidentified aerial phenomena Jacques Vallée recently joined us for a discussion on Rebelliously Curious with Chrissy Newton. Be sure to check out the interview and all our other video content on our YouTube channel. And, of course, check out all of our recent stories, which we’ve included at the end of this week’s newsletter.

With all that behind us, now let’s take a look at the recent sightings of strange objects pilots and others are calling “Racetrack UAPs.” Are they a genuine mystery, or is there more at work here… and what do they mean in terms of aviation safety going forward?

On Wednesday, The Debrief published a story involving several incidents reported by pilots in recent days who say they have observed bright objects in American airspace that they were at a loss to explain. The primary incident, involving a former Navy F-18 pilot named Mark Hulsey and his copilot, occurred on August 18, 2022, as they were flying a Gulfstream private jet over Los Angeles.

The story came to the attention of researcher Ben Hansen, whose television work related to UAP investigations is well known. Hansen obtained video of the purported objects, along with audio of the dialogue that occurred between air traffic controllers and the pilots. This, in addition to learning that the pilot had been advised to report the incident to the Joint Air Traffic Operations Command (JATOC), the FAA’s response unit for events that either represents a potential threat or are otherwise capable of impacting the National Airspace System (NAS) or national security.

Researcher and Debrief contributor Dave Beaty, who had been independently investigating the reports after Hansen produced a video commentary about them on his YouTube channel, also learned that the incident had been reported to the Domestic Events Network (DEN), which oversees any suspicious airborne activity for the Federal Aviation Administration (FAA). Following Hansen’s original series of videos detailing the pilot encounters, others began to come forward and describe seeing strange luminous objects during nighttime flights over various parts of the U.S. and surrounding waters. The circuitous behavior of some of these objects, namely during the August 18 incident, thereafter garnered a nickname from Hansen, who calls them “Racetrack UAPs”.

What does all this mean? In short, pilots have made observations of what appear to be unusual objects that produce bright flashes, some of which have purportedly followed odd, circular flight paths. The incidents obviously aroused concern by the pilots who observed them and presented a potentially distracting situation that they felt was significant enough to report to air traffic controllers, who thereafter forwarded the information to higher authorities. The August 18 incident, and perhaps several others, seem to have been taken seriously.

Shortly after The Debrief published its article, popular skeptical commentator and Metabunk founder Mick West reached out to me on Twitter, offering a plausible explanation for some of these sightings. Naturally, this is something The Debrief welcomes, as I occasionally point out that our publication is not a “pro UAP” news site, per se. We are, however, a news site that is unabashed in our support of the scientific study of UAP, and welcome serious, intelligent analysis of these purported phenomena, which must rely on critical thinking and, at times, healthy skepticism.

Getting back to what Mick shared yesterday, he directed my attention to a thread on the Metabunk forum by user Flarkey, who presents a very reasonable analysis that clearly points to the presence of Starlink satellites that would have been visible and, significantly, seen under the right visual conditions to produce some of the effects the pilots appear to have described. This occurred during one of the recent incidents touched on in our article, involving Flight Southwest549 flying near Springfield, Missouri, on August 19. 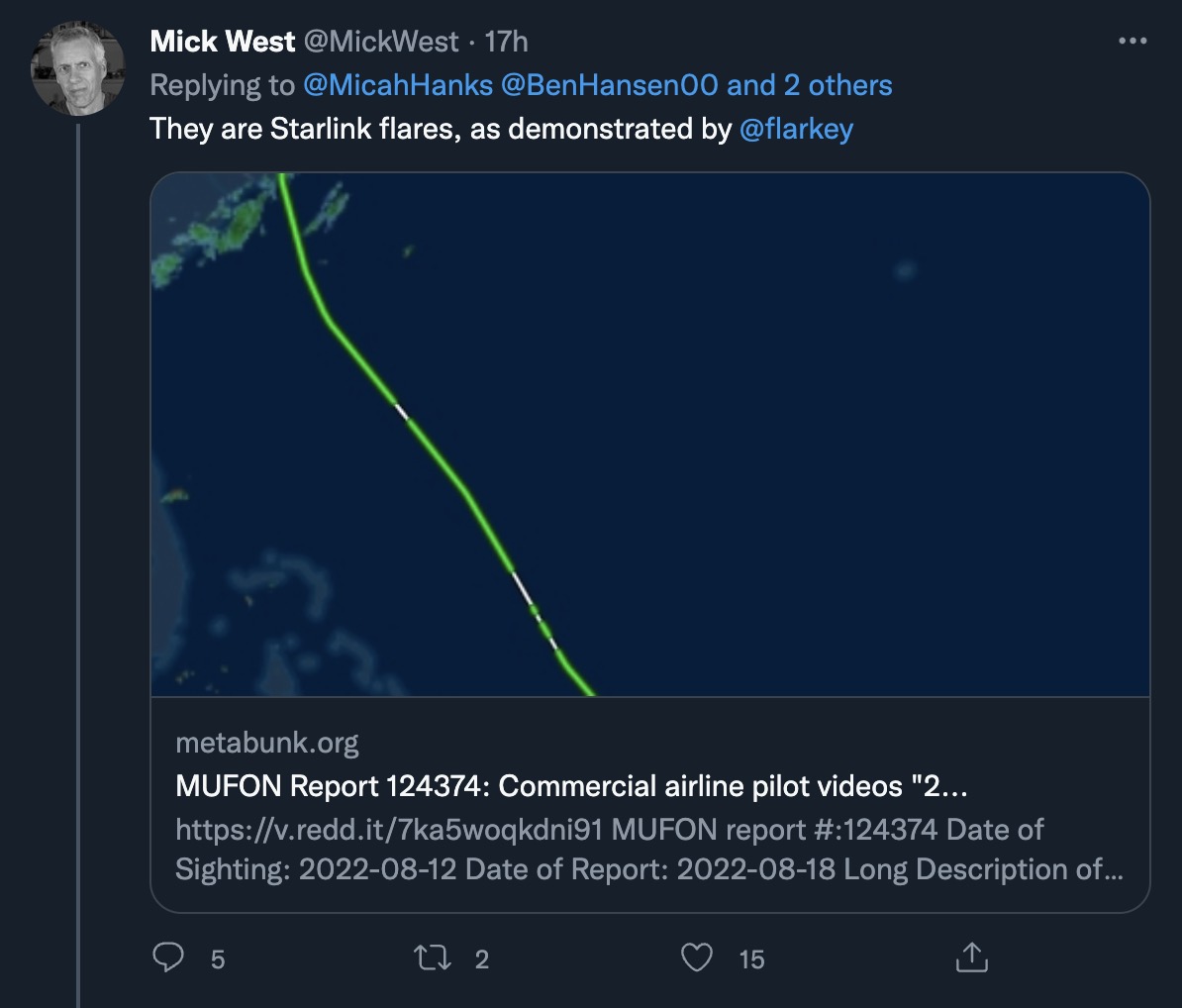 As Flarkey explains, “it appears that the observation of ‘Racetrack UFO’ matches with predicted Starlink satellite passes that could provide a flare.” Flarkey adds that his analysis “shows that these sightings are identifiable when enough and accurate information is given, or can be determined from a little investigation, with the right tools, and some knowledge about what is actually out there.” I highly encourage folks to check out Flarkey’s analysis, which can be found here. I also want to express appreciation to Mick West for sharing it with me.

So had the mysterious “Racetrack UAPs” several pilots have witnessed in recent weeks merely been Starlink satellites? It certainly seems reasonable to assume that at least some of them—perhaps even a majority—can be explained this way based on Flarkey’s analysis. In fact, it would seem almost foolish to ignore this possibility, since the data presented clearly demonstrates that there would have been reflective objects in viewing range during one of these incidents that helps to resolve the sighting.

But what about the other sighting reports Ben Hansen has collected, namely the August 18 observations that had been a main focus of The Debrief’s article on Wednesday? In it, we have descriptions by pilots who consistently described the circular movement of objects they had seen… can this purported movement be accounted for by Starlink satellites?

Thanks to Flarkey, we obviously know that some of these UAP sightings must reasonably be assumed to represent satellites. In the case of other possible solutions like stars, even considering illusory factors like induced motion, it seems hard to account for why some of the objects being observed would have had the appearance of following circular flight paths. Perhaps there is a simple explanation here too, but as Flarkey points out in his excellent analysis, “The habitat of the UFO truly is the low information zone,” and in many cases, we simply don’t have enough data to be able to determine what some of these objects are.

However, something that often goes missing in the dialogue related to observations of unidentified aerial objects—whatever their source may ultimately prove to be—has to do with what potentially negative effects these sightings can have on observers in a given situation. This is especially true for aviators, since even the observation of objects like Starlink satellites share something in common with less easily explained UAP sightings: they can all present distractions that may cause safety hazards for pilots, crew, and passengers.

Establishment of the AIAA UAP Community of Interest

On Wednesday, it was also announced by former Navy fighter pilot Ryan Graves that the American Institute of Aeronautics and Astronautics (AIAA) “is launching a Community of Interest to study unidentified aerial phenomena (UAP) and educate government, academia, and industry on risks to aerospace safety.”

The Search for Extraterrestrial Life

“The AIAA’s new Unidentified Aerospace Phenomena Community of Interest (UAPCOI) will be chaired by Graves and Ravi Kopparapu,” according to a press release issued Thursday morning. “Together, they will lead efforts to provide analytical support from the technical skill sets of the AIAA’s 30,000 members to agencies such as the Department of Defense (DoD), NASA, and others.”

Ensuring flight safety in American airspace for both civilian and military pilots is one of the primary concerns that had been expressed in the June 2021 ODNI report on UAP. While Graves and other pilots who are familiar with observations involving UAP recognize the range of different threats that genuine “unknowns” may represent to aviators, the same also holds true for objects with conventional explanations, which may either present distractions to pilots (like Starlink satellites) or as a result of cluttering our airspace, may lead to more direct threats to pilots, crews, and passengers.

So in conclusion, as we collectively continue to wade through reports involving sightings of odd aerial phenomena in our skies, it is vital both to maintain a critically-minded outlook on these purported objects, while also recognizing the challenges such observations represent to aviators. The combination of these approaches, one can hope, may lead to intelligent efforts put behind resolving questions about UAP, while also mitigating any threat potentials—direct or indirect—that some of them may present.