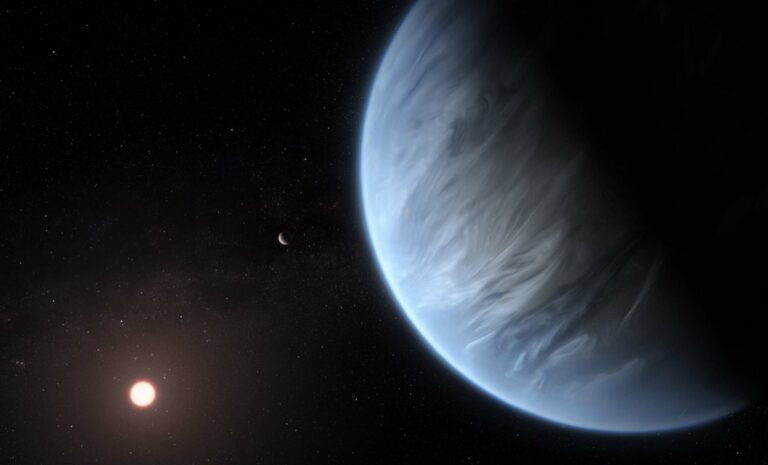 Finding liquid water on distant planets has remained a “holy grail” for space programs throughout the last several decades. Liquid water not only hints at the possibility that there may be life on other planets, but also holds promise for sustaining future life. However, this type of water may be stored in several ways, which can make it difficult to detect.

Recently, researchers from the University of Bern, the University of Zurich, and the National Center of Competence in Research (NCCR) PlanetS collaborated to understand better how liquid water could survive on planets that are very different from Earth.

Background: How to Find Water

There are many different methods used to determine if water can be found on other planets. In the past, astronomers had to rely on the reflection from a planet’s host star (similar to our Sun) in order to detect water. Today, scientists are able to employ tools like infrared spectroscopy to look at the light emitted from these planets, which can help determine if they hold water. Future efforts will have the assistance of the James Webb Space Telescope and other technologies to help facilitate even more thorough searches.

According to a recent collaborative study by researchers from the NCCRS PlanetS at the University of Bern and the University of Zurich, liquid water may be stored in some fairly unique ways. One of these involves its presence in the atmosphere.

“One of the reasons that water can be liquid on Earth is its atmosphere,” explained University of Zurich professor Ravit Helled. “With the greenhouse effect, it traps just the right amount of heat to create the right conditions for oceans, rivers, and rain.” With many planets having similar atmospheres to ancient Earth’s, the researchers are hopeful that this could lend new evidence to water storage. Helled adds, “Such massive primordial atmospheres can also include a greenhouse effect-much like Earth’s atmosphere today. We, therefore, wanted to find out if these atmospheres can help to create the necessary conditions for liquid water.”

To study these atmospheres, the researchers modeled these planets on a computer and ran various simulations. What they saw gave them hope about possible life on other planets. According to the lead author of the study, Marit Mol Lous, “What we found is that in many cases, primordial atmospheres were lost due to intense radiation from stars, especially on planets that are close to their star. But in the cases where the atmospheres remain, the right conditions for liquid water can occur.” These conditions are also quite stable, as Mot Lous added, “Perhaps most importantly, our results show that these conditions can persist for very long periods of time-up to tens of billions of years.”

Based on the results of this study, the researchers are hopeful that their findings may suggest a higher chance of discovering not only water but also extraterrestrial life.

“Since the availability of liquid water is a likely prerequisite for life, and life probably took millions of years to emerge on Earth, this could greatly expand the horizon for the search for alien lifeforms,” stated University of Bern professor Christoph Mordasini. “Based on our results, it could even emerge on so-called free-floating planets, that do not orbit around a star.”

With the aid of future exploration, scientists may one day attain even better knowledge about the atmospheric conditions requisite for liquid water, and in turn, shed new light on the search for extraterrestrial lifeforms.