Virgin Galactic “Red Light” Incident Gets Attention From the FAA 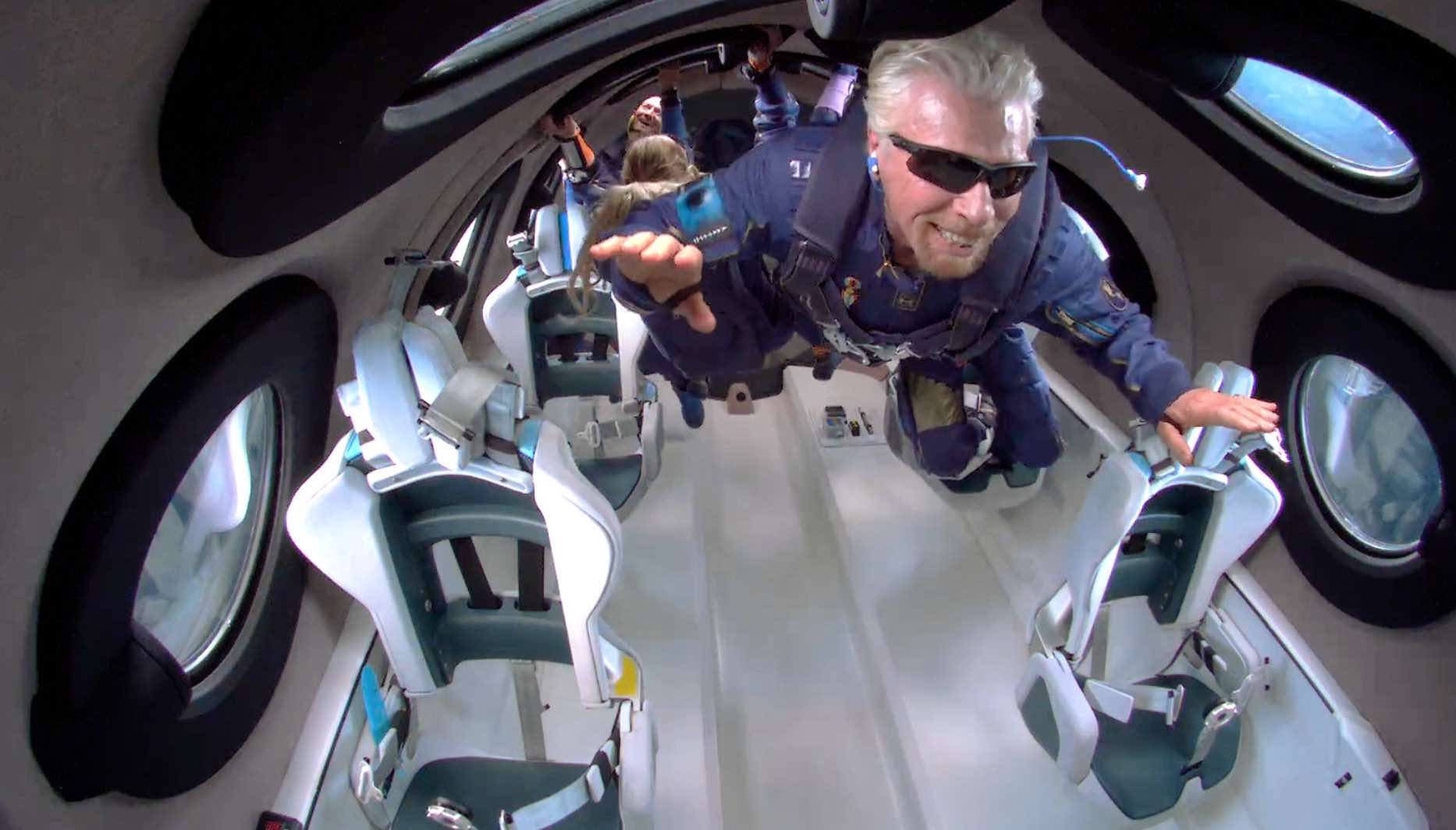 Welcome to another exciting installment of The Intelligence Brief… this week, a few items we’ll be covering include 1) new details about how the successful spaceflight by Virgin Galactic in July almost wasn’t, 2) what the big deal about a yellow light warning during the flight had been, 3) why the red light warning that followed was an even bigger deal, and 4) why the pilots didn’t abort the mission, which has now prompted an FAA investigation.

Before we dive into things, over at The Debrief this week we’ve been looking at a research team’s identification of a “Hycean” exoplanet class that they believe makes excellent targets for the search for extraterrestrial life. Also on the subject of ET, as UFO interest reaches unprecedented heights, renewed favor for the “extraterrestrial hypothesis” is revealing a new challenge for scientists, as I detail in a lengthy report. Meanwhile, for reporter Tim McMillan, the expression “one man’s trash is another man’s treasure” took on a curiously literal meaning in recent days as he found himself explaining how a fully-operational Russian T-90 tank turned up in a garbage dump near the Russian city of Volgograd. We’ll have a complete listing of more recent stories we’re covering at the end of this newsletter.

If you happen to be one of those millions of busy working-class types who can’t find time to read, then be sure to check out Cristina Gomez’s recent video, Cosmic Visitors and Immigrants from Other Stars, which looks at interstellar space objects like the mysterious Oumuamua and other space objects that may be passing through our solar system after traveling from afar. Be sure to check out more videos, podcasts, and other content from The Debrief on our official YouTube channel.
With all the housekeeping out of the way, it’s now time we shift our attention over to the reason the FAA is now looking for answers to concerning new details that have emerged in recent days pertaining to billionaire Richard Branson’s recent spaceflight.

While beating Jeff Bezos to space by several days and effectively kicking off the “Billionaire Space Race,” emerging details about the historic spaceflight of Richard Branson back in July now indicate the successful mission almost hadn’t been.

The mission, dubbed Unity 22, had been a sub-orbital spaceflight showcasing the Virgin Galactic SpaceShipTwo spaceplane VSS Unity, which took flight and successfully landed minutes later on July 11, 2021. During its mission, the aircraft was carried to an altitude of 50,000 feet by catching a ride on a carrier aircraft called WhiteKnightTwo, which delivered VSS Unity to its initial flight altitude and initiated its rocket engines. This enabled the craft to fly to a maximum altitude of 53 miles above the Earth where passengers Branson, Colin Bennett, Beth Moses, Sirisha Bandla, and pilots David Mackay and Michael Masucci experienced around four minutes of weightlessness.

Virgin Galactic’s successful flight received much fanfare, as one might expect. The mostly positive attention Branson received was no doubt helped along by the fact that, though it had been unmentioned at the time, Branson and his crew might have come closer to catastrophe than anyone previously realized.

The Light Was Yellow, Sir

What had not been reported upon VSS Unity’s successful landing had been the fact that a yellow warning light was apparently observed on the main console during the flight. The indicator reportedly appeared just one minute into the space plane’s flight.

Now, most of us were taught in school growing up what a yellow light means; that part isn’t really a mystery. Still, it’s worth asking here for the sake of clarity: what, exactly, was this one designed to convey?

“The light was a warning to the pilots that their flight path was too shallow and the nose of the ship was insufficiently vertical,” wrote Nicholas Schmidle for The New Yorker in a lengthy—and revealing—article published on Wednesday. This wasn’t the first time Schmidle has provided a behind-the-scenes glimpse at Branson’s operations for “the rest of us.” For years now, shadowing Branson has been his main beat, and he has reported on many of the Billionaire’s trials and triumphs since announcing he would be entering the space tourism business in 2004.

Coming back around to the yellow light… what would have happened if the shallow flight path hadn’t been corrected?

“If they didn’t fix it, they risked a perilous emergency landing in the desert on their descent,” Schmidle wrote. A successful emergency landing might have actually been one of the better outcomes considering the alternative. Now, according to Schmidle’s report, the FAA is looking into the incident; one can only imagine the conversations that may ensue between Virgin Galactic Employees and FAA investigators.

Schmidle spoke on background with eight officials from Branson’s company, who provided details about the potentially life-threatening incident. This, in addition to the revelation that not one, but two warning lights were observed during the flight: shortly after the yellow light illuminated the space plane’s console, it was followed by a red light.

Yes, we also know what a red light means.

With all the concern that was already afoot, there must have been several tense moments for pilots Mackay and Masucci as a red light then appeared, apparently indicating what is called an “entry glide cone warning.”

Rather than attempting to describe the technical aspects of this at the current time, the meaning of the red light can be best summarized by a statement made by Masucci during a meeting in 2015, when he advised that its appearance “should scare the crap out of you.”

The key detail here is that the presence of the red light tells us that Branson’s spacecraft had begun to fly beyond the area it had been cleared to fly within by Air Traffic Control. In addition to placing the aircraft at heightened risk of having to make an emergency landing (possibly at a less than optimal location), this also means the VSS Unity had been at potential risk of a midair collision with another aircraft.

According to The New Yorker, only one of the several Virgin Galactic personnel with whom Schmidle spoke felt that aborting the mission and returning to Earth before reaching the intended flight altitude would not have been the best option.

Why the pilots chose to follow through instead of aborting in the face of obvious danger is anybody’s guess. Obviously, much was at stake for Branson who, as Schmidle’s past reporting has conveyed, has lost both lives, and money on Virgin Galactic since its inception. In light of the fact that the pilots followed through, carrying the plane safely back on course to the completion of a successful mission, we certainly have much to be glad for in the skill and experience they exhibited.

Perhaps some of this experience had been gleaned during past experiences like the one in 2018, where the pilots actually did lose control of their aircraft during one test flight, from which they regained control and managed to land safely.

Although the story of Branson’s first spaceflight has a happy ending for now, it remains to be seen what the FAA will determine in the days ahead, which may yet pose problems for Virgin Galactic as the company proceeds with plans for the launch of its SpaceShipTwo mission later this month, and thereafter continue its pursuit of bringing space travel to the masses… or at least those of us who can afford it.

That concludes this week’s edition of The Intelligence Brief. As always, you can read past editions of The Intelligence Brief at our website, or if you found this installment online, don’t forget to subscribe and get future email editions from us here. Also, if you have a tip or other information you’d like to send along directly to me, you can email me at micah [@] the debrief.org, or Tweet at me @MicahHanks.